Sorry for the delay with this week’s Modern Monday. As some of you may know, this past week I had my wisdom teeth taken out, so I was recovering from that. And along with the prerelease, things were a little hectic. Okay, so getting my wisdom teeth out didn’t make things more hectic, so to speak, but it did make it more difficult to speak, and that feels kind of relevant. After all, how am I going to sing during my matches for you?

The deck we’re taking a look at today has been around for a couple of months now. The first time I saw it was when my pal Zac Elsik posted about it on Twitter, mentioning that he found it in a forum post. He made some changes to the original list, but I’m pretty sure that his and all the versions that popped up after are extremely close to that initial version. Today we’re taking a look at a version piloted by Magic Online user truestory. Take a look.

Being a little familiar with this list from previous experience, I can already see some things I’m not incredibly fond of, but a 5-0 is a 5-0, so I’m curious to see how this list handles. One thing I love about this archetype in general is the high concentration of cost reducers and modifiers, such as Grand Architect, Chief Engineer, and Etherium Sculptor. These cards all fill a Mox Opal/Springleaf Drum kind of role—only they are significantly more fragile, with them being such small creatures. Nevertheless, there are still 8 Lords in the deck, which is sweet, along with some cool Modern-era cards like Smuggler’s Copter, Walking Ballista, and even Throne of the God-Pharaoh (what?!). In the words of my dear friend Larry, The Cable Guy: let’s play some games of Magic: The Gathering Online!

Let’s not beat around the bush: I like this deck a ton, and I think it shows a lot of promise—Walking Ballista’s ability to become huge is powerful in the Modern metagame. What I don’t like is that my only real top-end is 1 Wurmcoil Engine. There was a version of the deck I played once that had more Wurmcoils, along with things like Myr Battlesphere. You have all these ways to accelerate artifacts into play, but you’re barely taking advantage of them. 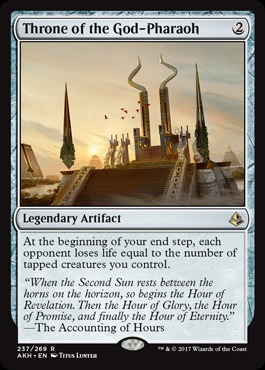 I definitely don’t think you need seven 1-drops to facilitate things. I get that you can tap them or convoke with them, but you don’t need 7 to play one on turn 1, and you definitely don’t want to draw a million of them later. Throne of the God-Pharaoh also seemed underwhelming to me, not least of all because it is legendary and you never want to draw both. I do love the ability to tap my guys all willy-nilly with things like crew or to add mana, but dealing an extra 3 points at the cost of tapping down my entire team on my turn is not super appealing. Is this really better than 2 Myr Battlespheres or some number of Platinum Emperions, which aren’t legendary?

One problem with the deck is that I simply don’t have the tools to deal with certain strategies. I don’t have any discard or cards like Stony Silence. I have 1 copy of Pithing Needle for cards like Karn Liberated or Oblivion Stone, but that’s it really. As you can see from the Tron matchups, if they’re able to go Oblivion Stone into Karn, into Ugin, the Spirit Dragon, into World Breaker, in any order, you’re pretty much out of luck with no way to get around those things.

Either way, the deck was sweet, and I would tweak it a little to make it a little more efficient at taking advantage of all that mana I had lying around. Thanks a ton for reading, guys, and I’ll catch you later!