I absolutely love playing Dungeons and Dragons. I’ve been playing since I was a teenager, since way before it was cool–kids these days don’t know how good they’ve got it, with The Adventure Zone and Critical Role and HarmonQuest making roleplaying cool. Back in my day, nerds like me were relentlessly teased and made fun of for pretending to be elves and slaying ogres and whatever, uphill, both ways, etc.

As such a huge sucker for D&D, when I first saw Bag of Holding, I was thrilled. This card is so excellent, so flavorful (although “real” bags of holding aren’t single-use). The marriage of gameplay and flavor was incredible–so I was very happy indeed when alert viewer Jesse Alora got in touch with a hot and spicy list based around Bag of Holding. After a few of the requisite Arena Boys tweaks, we did battle with this masterpiece!

Bag is the name; holding is the game. The centerpiece of this deck is, of course, Bag of Holding, which takes the deck from being pretty bad to just kind of okay. To make the most of the Bag, you want to find ways to discard cards for fun and profit; this brings us to the “discard suite.” 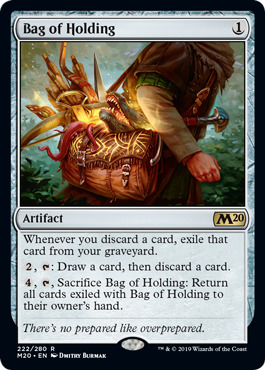 Cards like Tormenting Voice and The Flame of Keld are hardly Constructed all-stars, but if you find a way to make use of the cards you discard, they suddenly gain a lot of utility. Tormenting Voice instead becomes “draw two, save one for later,” which is much more palatable.

Other cards that make us discard cards are respectable threats in their own right: Jaya Ballard is a slow, lumbering value engine that demands an eventual answer, while Neheb, Dreadhorde Champion overperformed as a hard-hitting threat. Cavalier of Flame is a no-brainer, offering both synergy and power in spades. Cavalier, Jaya, and Neheb work extremely well with the Bag of Holding, filling it up nice and quickly.

Outside of the Bag-based synergy, the deck is filled with (hopefully) relevant interaction. Shock, Lava Coil, and Flame Sweep were our weapons of choice (this was recorded at a time when Scapeshift was at its apex), although other possible considerations included Lightning Strike for extra reach and Fight with Fire to kill bigger creatures.

Finally, Glint-Horn Buccaneer is an important piece of the puzzle that gives this deck a way to win the game without needing to attack. Multiple Buccaneers, or one in combination with The Flame of Keld, can obliterate an opponent’s life total with just one or two Jaya activations or Cavalier triggers.

This deck can only do its best work with Bag of Holding online. Luckily, given the velocity of the list (it’s able to churn through cards very quickly indeed), finding a Bag isn’t too much of a task. Once set up, Bag of Holding upgrades most of the cards in your deck and makes casting things like Tormenting Voice and The Flame of Keld feel great rather than awful.

The consistency offered by this list is ridiculous. Purely due to the sheer number of cards you’ll see, you’re able to cherry-pick the best one for any given situation. Not under pressure? Get Jaya ticking up. Need to stabilize the board? Snag some removal. Want to start applying real pressure? Use Neheb or a Cavalier. None of these options are first-rate in the broader context of Standard, but in this deck they punch above their weight thanks to Bag of Holding.

However, despite the deck’s consistency, its win conditions are a little all over the place. Cavalier of Flame and Glint-Horn Buccaneer are probably the most reliable ways to win, especially when powered up with the third chapter of The Flame of Keld. An ideal scenario involves casting Flame, discarding your hand into a bag, then cracking the bag during your opponent’s next turn to have a huge grip. Deploy a Buccaneer, discard your hand again, rinse, repeat. It’s a scrappy old plan, but it’ll do the job.

One useful thing to remember is that playing cards that are bad in multiples isn’t even close to being a problem in this list. Usually, drawing a second The Flame of Keld is a nightmare, but in this list, no worries! Just loot it away. The same goes for dead removal or extra copies of legendary threats.

This deck is super weird and requires you to exercise careful judgment when considering the best lines. Broadly speaking, I would suggest being defensive rather than aggressive, and build up towards a big turn with The Flame of Keld and a Buccaneer, but it’s possible to get on the front foot with a Cavalier. Finally, it’s important to remember that on the fun/playable spectrum, this deck definitely is slanted towards fun–it’s not the most competitive deck we’ve ever played.

We make only some minor adjustments to the list this week. Rowdy Crew was included for entertainment value, while Pirate’s Pillage is a pet card of Jamin’s (that I was happy to discard and never cast). Additionally, every time I drew a colorless utility land, I ended up just wishing it were a Mountain, although maybe that was just due to the MTG Arena auto-tapper.

We cut a Jaya for a Cavalier–Cavalier is the superior five-drop, I think–while Rowdy Crew and Pirate’s Pillage make way for Fight with Fire. There are some big old creatures cutting about in Standard at the moment, and besides that, making it to nine mana to kick it isn’t out of the question (especially with Neheb!).

You can also adjust the removal suite to suit whatever field you’re expecting to battle through. If it’s light on creature-based decks, swap in Lightning Strike for more reach; if you expect things to go really long, consider Dismissive Pyromancer or even Honor the God-Pharaoh. Conversely, if you’re going to play against a lot of aggro, play the extra Flame Sweep and cut the Regulator and a Cavalier for more relevant removal.

Rotation is coming on quickly, so if there are any cards you want to see us play before Throne of Eldraine then make sure to get in touch and let us know, before it’s too late! The best place to do this is on Twitter: @thearenaboys.