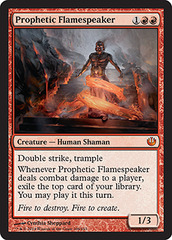 Every once in a while, there comes a card that does so much that you just don’t believe it’s real, because why would a card have all those abilities together? Prophetic Flamespeaker is one of those cards. I mean, look at this card for a comparison: 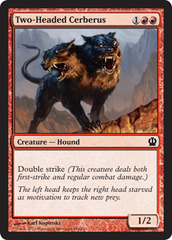 The thing that really does it for me regarding Prophetic Flamespeaker is how well each of his abilities work together. First, we have double-strike and trample, which is a fantastic combination because if you ever pump him, he’s likely to have a lot of damage to spare. Then we have double strike and the “Chandra ability,” which is great because you get to activate it twice with every attack. Then we have trample and his third ability, which means that it’s hard to chump block him to stop you from getting an extra card. Flamespeaker would maybe have been playable without trample, without double strike, and even without the draw a card ability, but the combination of the three makes it one of the strongest cards I’ve seen in recent memory on an objective power level.

The interaction between his abilities is actually stronger than it might appear just by looking at the card. Imagine, for example, you attack into a Loxodon Smiter. Once you’ve dealt first strike damage you can Bolt it, and then you still get 1 extra trample damage to look for a card, and your guy doesn’t die on top of that.

If your opponent has Voice of Resurgence or another guy that will just come back if you deal with it, you can attack, let them block and then kill it. Since your guy has trample, you will actually get both triggers of the ability. If you have a Flamespeaker and a 3/4 and your opponent has his own 3/4 and, say, a 1/4, if you attack with both guys you might force a double-block on the Flamespeaker, otherwise something like a Dismember or Abrupt Decay could mean you get to effectively draw two cards as well. If you attack with two Flamespeakers, the first strike from the first one might reveal a removal spell which will let the second one get through for 1 point of damage.

Flamespeaker feels to me like it doesn’t need much setup. A similar card like Shadowmage Infiltrator will be good in a control deck because you are giving up on one thing (damage) for another thing (cards). You need a deck that doesn’t care about damage. A card like, say, Ball Lightning, is the opposite—you need a deck that only cares about damage. Flamespeaker doesn’t demand anything from you—even with no support, he’s still just going to get there a lot of the time, whether you care about damage or about cards.

That said, he gets better with some specific type of cards. If you have Flamespeaker, this is what you want:

1) Cheap spells. This is the main priority. Cheap spells are great with him because they let you cast whatever it is you “draw” from his ability, and it also lets you do something to get him through and still keep mana up to play whatever it is you draw. If you have to tap out to cast your removal spell, then you’re only getting through for 2 damage and maybe a land, as opposed to 2 damage and two potential cards.

2) Removal. He is not the strongest guy around, and, though he can fight some things, he can’t fight many things on his own. If your removal is burn that is better, since you get to use it when you reveal it as well.

3) Pump spells. Pump spells not only get him through but also have twice the effect because of double strike. Flamespeaker plus Rubblebelt Maaka is very cheap and hits for a ton of damage, through any blocker, still leaving you three open mana to play whatever you flip. Flamespeaker plus Ghor-Clan Rampager is a very common combination that hits for 10.

So, where would you play him? In Standard, I would probably try all the following types of decks:

He is not fantastic in this deck, since it doesn’t have many cheap spells or ways to clear blockers, but it’s probably still very good. It’s decent at enabling devotion and it digs for your good cards. This deck also wants lands in play, which means the third ability is rarely going to be irrelevant, and if you have a Nykthos you’re generally limitless on what you can cast. One of the issues, however, is how badly this card interacts with haste. If you play a Stormbreath Dragon, for example, you’re guaranteed to “miss” on your ability—then you have to decide which is more important.

Another deck it could be good in is red aggro. This deck can usually cast all its spells and it has pump to make this guy better. I’d build it like this:

It’s the top of the curve here, and it’s possible that it doesn’t belong, but it does work very well with what this deck is doing. If you have the Akroan Crusader version with Titan’s Strength then he is even better.

The deck I’m most excited to try this card in, however, is Modern Jund. Jund doesn’t have any pump effects, but it fits the bill for everything else—it has a bunch of cheap cards and removal. When you let your Jund opponent untap with Dark Confidant it’s desperation inducing, and this guy is basically two Dark Confidants because you can almost always play whatever you hit since the mana curve in this deck is so low. I’d play it like this:

In the end it’s possible that Flamespeaker, though an objectively powerful card, is not good enough. It’s possible it’s too expensive for the small decks, and too small for the expensive decks. It’s possible that the fact that it dies to Lightning Bolt makes him too weak for Modern. If it’s not too weak, too expensive, or too small, however, then it’s going to be an insanely good card, because the power is certainly there, and I will make sure I try him a lot before I dismiss him.