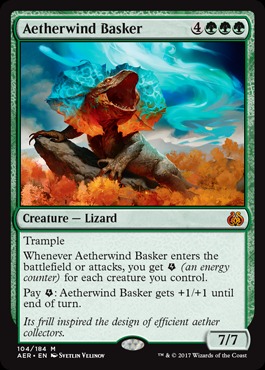 I’m not normally a fan of 7-drops (in Constructed, to be clear), but this is potentially a 15/15 trample the first time it attacks. It also fuels energy cards like Aetherworks Marvel, and the ability to make massive amounts of energy is worth taking into account.

This is one of the more interesting cards in the set. By itself, it’s GGG for a 3/4, and that payment can be split up among multiple turns. That’s okay, but not fantastic. Combine it with energy cards and you either get a cheap 3/4 or an energy-generation engine, and those 2 abilities add up to a very appealing 1-drop. Where I see this fitting best is an aggressive energy deck, as it can utilize both halves of this card. 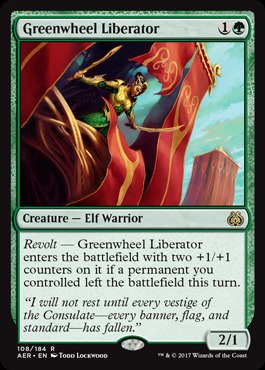 I like this more for Modern than Standard, though a 2-mana 4/3 isn’t quite there either. Without fetchlands, this is a bit too much work for too little payoff. 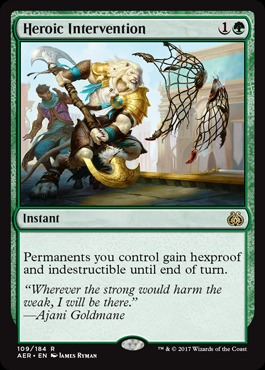 I like the look of this. It strikes me as a sideboard card, and an effective one. It counters sweepers (Yahenni’s Expertise aside), is relevant in combat, and can stop any targeted removal spell or ability. That’s a lot of card for just 2 mana, and removal-based decks are going to need to watch out. 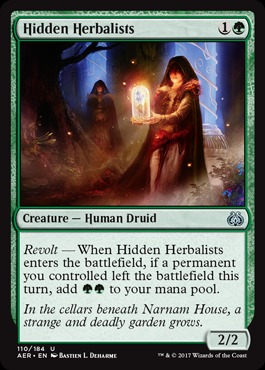 Burning-Tree Emissary got a new friend, and this could lead to more sweet Reckless Bushwhacker turns in Modern. Fetchlands make this a great turn-2 play, and there are plenty of ways to take advantage of a 0-mana 2/2. 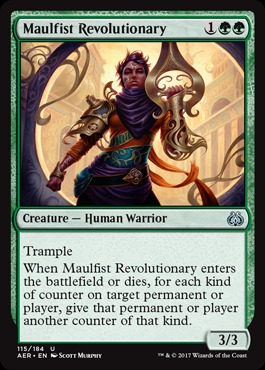 The 3/3 for 3 part of this is a little less impressive in Constructed, but the counter synergy is much easier to pull off. This will often end up as 4/4 or 5/5 in stats overall, which is worth it in a deck built to maximize that. 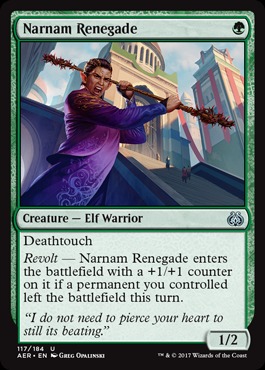 This is one of the revolt cards that I like best. A 2/3 deathtouch is a solid little fighter, and costing only 1 mana makes it that much more likely it will be on. It’s also relevant without revolt, and the combination of all that makes this intriguing. At the very least, it’s a super Kird Ape in Modern. 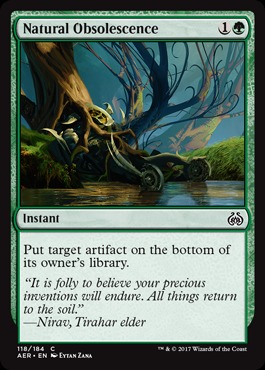 Purely sideboard material, Natural Obsolescence gives you a good option against cards you don’t want to send to the graveyard, or cards that are indestructible.

Rishkar is the sweet combination of a lot of stats and a very powerful ability, all for just 3 mana. Any deck with a lot of 1- and 2-drops should consider Rishkar, as this is one of the most powerful cards in the set. 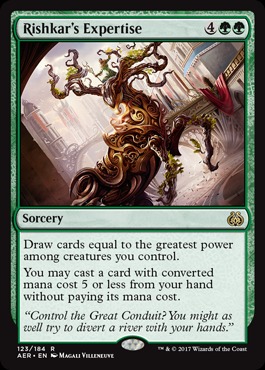 The idea of drawing 3-5 cards and playing something large for free definitely appeals to me, and it doesn’t seem impossible to get that to work enough of the time. The drawback of your 6-drop doing nothing is a big one, don’t get me wrong, but when this works it will be strong enough to risk that drawback. 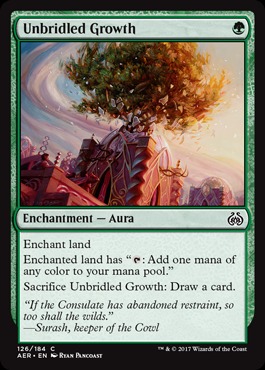 I don’t know exactly where this goes yet, but a 1-mana revolt enabler that you can sacrifice later (making it cost zero on the turn you need it to) that doesn’t cost a card is worth noting.

Rishkar is no joke, and Greenbelt Rampager is a solid dude. Past that, green got a lot of speculative cards, and is not as obviously powerful as some of the other colors.