The first Pauper results from a world without Gush are in. The May 26th Challenge and May 29th League results show a format that is all at once new and familiar. New, in that there are many more decks represented at the highest levels of Pauper competition. Familiar, in that if you ask any Pauper regular about the decks showcased, they will have likely run into them at least once.

That last point is an important one. Before Daze, Gitaxian Probe, and Gush were banned, there were two vocal camps in the Pauper community. There was a pro-ban group, which felt that removing some of the more powerful cards in the format would allow other strategies to flourish. I was firmly in this camp. The other side felt that bans were unnecessary because of the apparent diversity in the decks they faced in competition. When you examine the results of this week, understand that this is the metagame that this latter segment was observing.

So that leads to the first winner in this new world—the metagame itself. Gush and Daze kept other decks from being competitive. If your deck could not reasonably keep pace with a free draw-two, then you were behind. If your game plan hinged on turn 2, you had best hope you were not facing Daze. Pauper now has some breathing room after waiting almost two years to exhale. These two limiting elements have been removed and as such the format is finding new ways to take advantage of the time afforded by the change.

The Winners After the Pauper Bans

Right now is the best time in the history of Pauper to do something proactive on the second turn. It used to be that Cloud of Faeries into Spellstutter Sprite was a lock-down answer, until Cloud was banned. Augur of Bolas with Daze backup was not a Spell Snare on a stick, but was a huge barrier to trying to muster an offense. Take this Stompy deck, for example.

SOTA_NAKAJIMA, 5-0 in a Pauper League

When Burning-Tree Emissary was added to the format, Stompy shot to the top of the standings. The ability to chain multiple 2-drops on the second turn allowed the green machine to easily overwhelm opponents until Augur of Bolas caught on. Now that one of Augur’s friends in Daze is no longer around, there is a reason to take a risk on turn 2 again. Burning-Tree Emissary stands to make additional gains once Modern Horizons hits the scene thanks to Orcish Hellraiser. The Hellraiser is the right size to attack through an Augur while also doing some damage on the way out. Burning-Tree Emissary has seen play in aggressive red decks before and the Orc is sure to see play come June.

ChalkyYellow, Top 16 at May 26 Pauper Challenge

Is Exhume a bear? No, but it does represent a powerful threat as early as turn 2. Stinkweed Imp, Faithless Looting and Insolent Neonate can help dig you incredibly deep early in games. Finding a Ulamog’s Crusher or Eldrazi Devastator and whipping it back into play with haste (thanks to Dragon Breath) is one way to put the hurt on your opponent. Spellstutter Sprite means that this strategy is not without risk, but the fact that you no longer have to worry about Daze makes trying the turbo reanimator route a bit more exciting. Street Wraith warrants consideration since it can represent a 3/4 on turn 2 thanks to Exhume. If it’s good enough for Legacy, it’s likely good enough for Pauper.

Elves won the Challenge, but Lead the Stampede had a strong showing outside of the pointy-eared ones. Lead the Stampede can be better than Divination at the same mana cost; in the correct deck it usually hits three cards at minimum. Now that Gush is gone, players are spending mana on their two-for-ones. Compulsive Research and Accumulated Knowledge were the card draw spells of choice in week one. In order for other colors to compete, they have to pull ahead. That’s exactly what Lead the Stampede does.

Lead is not ideal at finding key combo pieces, but it does a great job of finding redundant cards. It shines in Elves and Slivers for this reason. While Aristocrats and Project X have more specialized creatures, many fill similar roles and Lead the Stampede can provide the raw cards that help these decks function.

ssWakizashl, Finalist at May 26 Pauper Challenge 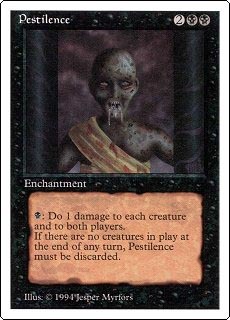 Pestilence is basically a Pauper planeswalker. It sits on the battlefield and with a little work can generate a persistent advantage. The enchantment was already a major player in Pauper before the “Blue Monday” bans, but in the first post-ban week it proved itself a strong strategy with two decks in the Top 8.

Pauper is about two-for-ones. Even when you have to invest mana in them, they remain the bread and butter of card economy. Trying to play a game of one-for-one trades can leave you far behind. Pestilence helps to patch this problem and provides the opportunity to handle multiple threats with one card. It also helps to end the game. Pestilence may not always be as strong as it was this week, but it is bound to be an important fixture moving into Modern Horizons.

Note this article is not about winners and losers. Immediately after the bans, there were fears that blue decks would take a major hit and that Gush-based combo decks like Tireless Tribe and Izzet Blitz would die. That was not the case. Accumulated Knowledge and Compulsive Research helped to power a Tireless Tribe deck to a Top 16 finish while Sleight of Hand helped the Nivix Cyclops deck do the same. A blue Gurmag Angler deck went undefeated in the Swiss on Sunday and finished in the Top 4 with Accumulated Knowledge and Thought Scour, while a modified Dimir Delver came in 9th on tiebreakers. Even if these decks are a shadow of their former selves, they are still performing at a high level. And that’s great news for Pauper.

Modern Horizons is almost here and Pauper is ready. The format is just starting to find its feet again and when this next set hits, everything will change all over again.