Jace, the Mind Sculptor and Bloodbraid Elf are two very powerful cards, and it’s no surprise that they’ve already started to change the format. Right now, they’re also a novelty, so everyone will want to try them and their effect will be even more pronounced. Today, I’ll identify the biggest winners and losers from the announcement.

If I had to pick one single winner from the unbans, it would be Lightning Bolt. It’s a winner for a variety of reasons.

First, it makes decks want to play red more often. Whereas before Abzan was effectively a better Jund in a lot of cases, this is no longer true—you’ll probably have Abzan, Jund, and 4c decks all vying for spots, which means more Lightning Bolts being played.

Second, it’s a way for your removal spell to kill Jace, the Mind Sculptor. Sure, players can and will fateseal first if they suspect Bolt, but sometimes they can’t afford to, or sometimes you can deal the 2 other damage with another card. If your opponent plays Jace, the Mind Sculptor and you have Fatal Push, Path to Exile, and Terminate in your hand, then you feel like you can never win. With Bolt, you can just kill it. The value of Bolt as a removal spell will rise, and creatures that survive Bolt will become better.

Third, it’s a better card to cascade into than other removal spells most of the time because pure removal spells might not have any targets. When you play Bloodbraid Elf, you’re overpaying for the body in the hopes that you’ll get another good card to go with it. When you hit a Fatal Push against Tron, then that’s going to feel horrible. With Lightning Bolt, the floor is lower—you at least get to hit them for 3.

Fourth, Bloodbraid Elf is a 3/2 creature with haste. It’s going to make your deck more aggressive. Once that’s the case, the 3 damage to the player becomes more relevant.

Fifth, it also happens to be good with Jace, the Mind Sculptor as well. When you have a 4-mana planeswalker that can win the game on its own, then you want cheap removal to go with it, so you can play it on an empty board.

With the introduction of Bloodbraid Elf and Jace, the Mind Sculptor, the format gets two very powerful 4-mana effects—exactly the type of card that someone casting a discard spell wants to take, and exactly the type of card that Inquisition of Kozilek cannot deal with. Every person who has ever Inquisitioned someone on turn 3 only to see a Collected Company knows how frustrating this can be, and now that can happen against any blue deck and any midrange deck.

In practice, this shouldn’t affect how you build your deck much (though if you have a deck that has Jaces and no fetches you should rethink that), but it will affect how you play the games, and it means you should place a higher priority on your fetches in the late game. If I’m playing a deck like Jeskai, for example, I’ll often fetch in the middle of the game to thin my deck (assuming life isn’t relevant), but from now on I will hold them longer, similarly to how you would play if you have Tireless Tracker in your deck.

Snapcaster Mage is a winner for a variety of reasons as well.

First, it’s a blue card that goes well with cheap disruption or cheap removal, and that’s the kind of card that a Jace deck wants—they want to clear the board and play Jace when there’s at most one creature in play.

Second, it’s a good way to pressure Jace. If your opponent taps out for Jace, you can play Snapcaster and attack it. If you have a Lightning Bolt or a Lightning Helix in your graveyard, you can finish Jace off even through a +2.

Third, you can bounce it with Jace to recycle another spell. It’s rare, but it does come up, and people often don’t pay attention to it. It’s usually better to bounce the Snapcaster Mage and recast Path than to bounce the Tarmogoyf, for example.

Fourth, there’s now a 3/2 creature that it wants to block. Before Bloodbraid came back, if you weren’t pressuring them, the 2/1 creature wasn’t the most effective. Against Jund, for example, it didn’t trade with anything except for Dark Confidant, which would be happy not to attack into it. Now there’s a 3/2 around, so the body becomes way more relevant.

Lantern seems to be much worse than it was before, for three reasons:

I think the combination of everyone wanting to try those cards at first will make the format very hostile to Lantern. Once the metagame becomes more established, then maybe Lantern can be good again.

If you can manipulate your draws, Terminus is an immensely strong effect that you have to pay 4 mana for most of the time. In fact, it’s often better than what you get at 4 mana, since putting creatures in the bottom of their controllers’ libraries is better than putting them in the graveyard. Yes, they can draw it again if they shuffle their deck, but that pales in comparison to stopping graveyard effects like Kitchen Finks, Voice of Resurgence, Kolaghan’s Command, Liliana, the Last Hope, Living End, Eternal Witness, Scavenging Ooze, and so on. On top of everything, it’s sometimes instant speed, which can be very relevant against decks like Affinity.

Terminus hasn’t seen Modern play because there weren’t any reliable ways to manipulate your library, but this changes with Jace. Once you play a Jace and Brainstorm, you can simply put a Terminus on the top of your library. Granted, that’s still going to be turn 5 most of the time, so you could just cast a Supreme Verdict, but casting a Terminus instead means that you can still play another spell that turn—perhaps a second Jace if your first one died.

Jace plus Terminus (or any sweeper, really) is also a good combination because Jace is the kind of card that punishes a player that plays one big creature per turn, whereas Terminus punishes those who play multiple. It’s similar to the good old Icy Manipulator plus Wrath of God combo. Imagine your opponent has a creature (say, a Tarmogoyf), and you play Jace and bounce it. Now, they can’t just replay Tarmogoyf because you’ll bounce it again. They have to add even more to the board. So, they are forced to commit—they’ll play, perhaps, 2 Tarmogoyfs. You can then use Jace to Brainstorm, put Terminus on top, pass the turn and cast a cantrip (Opt or even Cryptic Command) to draw and cast Terminus.

This, of course, extends to any card with the keyword miracle in it. Terminus just happens to be the most important one. For reference, here’s a list Brew Crew played at the Modern Super League:

Liliana, the Last Hope is similar to Kolaghan’s Command in how it works with Bloodbraid Elf. It’s a powerful 3-drop that you don’t mind cascading into against both aggro and control (though it’s bad versus combo), and the addition of Bloodbraid Elf makes it so that it’s more likely to have high value targets later on.

Bouncing creatures is going to become way more common, and delve creatures do not like to be bounced. If your opponent bounces a 3-drop, that’s annoying, but at least you can recast it. If they bounce your Gurmag Angler, Tasigur, or Hooting Mandrills, chances are that you can’t even do that.

Vendilion Clique has always been a great card, but Jace and Bloodbraid both make it better. First, it offers a way to get rid of those cards preemptively, which you don’t often see in blue. Bloodbraid Elf in particular is a problem because it’s almost guaranteed to 2-for-1 you if they get to play it (since cascade happens through counterspells). With Clique, you can just take it.

Clique is also excellent at attacking Jace, and it can’t really be bounced profitably since you can just replay it. If they fateseal, then you need something else to finish it off (which shouldn’t be too hard—even a Snapcaster will do), but at least it’s pressuring it and they can never Brainstorm before answering it. 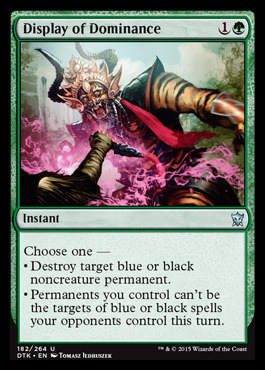 This is somewhat of a sleeper card that might see some play because of Jace. You can use it to flat-out destroy Jace or any other U/B planeswalker (namely either Liliana), and it also protects your creatures from Fatal Push, Terminate, Abrupt Decay, Maelstrom Pulse, and Cryptic Command bounce. In the end, it’s probably too awkward because the decks that have Jace aren’t the ones with the most black removal (those use red and white removal instead), but it’s a good option to keep in mind.