It is incredibly hard to get a new creature to break through in Pauper. Unlike the quality of removal spells, however, the barrier for entry is not very high. While a better Lightning Bolt probably isn’t walking out of Renton anytime soon, it is not hard to envision a world where we get better beatsticks. But over the past two years only two creatures have made headway in the format thanks to their offensive capabilities: Seeker of the Way (a rarity downshift) and Ghitu Lavarunner. Other creatures have made the cut due to utility (Tethmos High Priest) or synergy (Faerie Seer) but very few get by on their stats in combat.

At the same time, we have seen some seriously pushed spells making their presence felt. Arcum’s Astrolabe, Ephemerate, and Weather the Storm have helped to reshape the format. Foil helped to push Gush out, while Fire // Ice still sees play. Lead the Stampede, Winding Way, Emerge Unscathed, Savage Swipe, Skewer the Critics–I could go on. Spells have a much easier time finding a home.

This dichotomy–better spells and weaker creatures–is not likely to change anytime soon. The problem is not with any individual card but rather the nature of commons and the purpose they serve to the wider Magic ecosystem. Let’s take a left turn into Limited.

In order to craft exciting, fun, and replayable draft formats, commons have to do a lot of work. They must be strong enough to form the majority cards that will be played without being so overpowered that they can dominate the environment. It is not that Sparksmith shouldn’t be a card, but rather it should not be one that you can expect to get three of (if you are the only Goblins drafter for some reason). But Sparksmith is far more a utility creature than anything else.

In order to find a set based around aggressively minded creatures in Limited we need to go back to Zendikar. There, Plated Geopede, Steppe Lynx, and Surrakar Marauder ruled the day. While these cards are not overpowered by today’s standards, they still skewed the draft landscape towards aggression. When the right pick is the fastest creature, it takes away the agency of the drafter to explore the format. As such, commons have shifted away from generally good offensive threats.

Gatecrash was another fast draft format, although not nearly as quick as Zendikar. There, powerful creatures were concentrated in gold cards (Shambleshark) or cards that needed synergy to work correctly (Cloudfin Raptor). Amonkhet is a more recent example of an aggressive set thanks to exert creatures like Gust Walker and Hooded Brawler. While Gatecrash serves as an example of narrower cards, the issue with the threats of Amonkhet, at least in Pauper, is that attacking with them every other turn just is not good enough. 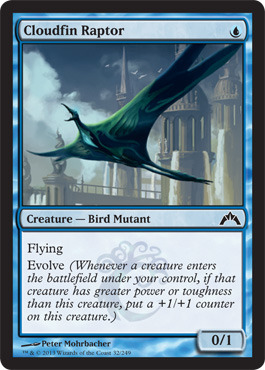 The result of this design philosophy to make Limited an enjoyable experience leaves Pauper wanting for potent threats. At the same time, however, the common cup runneth over with powerful spells.

Again, this makes sense if you consider Limited. Spells are largely there to support creatures (outside of niche decks like Clear the Mind). At common they tend to supplement creatures, weather that be through combat tricks, removal, or a way to get more out of a creature (think Soul Salvage). It is not that Winged Words can’t exist, but rather that cards of that stripe need to fit into specific archetypes. Draft should be dynamic and have a metagame that exists at both the macro (format) and micro (table) level. As such, spells should be sufficiently strong that a player wants them but not so potent that people are always willing to abandon their picks to have them. Obviously top-tier removal spells warp this, but a card like Defile is not going to go late to the white-green drafter.

Because of this, spells tend to repeat themselves in effect often. As themes are repeated, so too are styles of cards. And while Ephemerate may not exist with Archaeomancer in Modern Horizons, it does in Pauper. As these spells get additional iterations, the synergies they are built for get stronger and stronger in non-rotating formats. Outside of Pauper, this is not a huge deal as there are even more powerful cards at higher rarities that help push themes in Constructed. In fact, these rarities are tools to help promote healthy Limited experiences as they can concentrate power in less frequently seen cards.

The concentration of power at higher rarities means that Pauper must make do with synergy and glue cards–the ones that make Limited run. Since these cards have been spells as of late, the incentive in Pauper is to build towards these spell-based engines in such a way to maximize them. Archaeomancer-Ephemerate is one such combo, but so is Mnemonic Wall–Dinrova Horror–Ghostly Flicker. Similarly, Glint Hawk and Arcum’s Astrolabe has become a far more efficient engine than the ones that used two-mana cantrip artifacts. Glint Hawk and Kor Skyfisher already existed, but Astrolabe helped to make these creatures part of a card flow machine.

All these packages take time to assemble. While an UrzaTron mana base can make it pitifully easy to execute a loop multiple times in a turn cycle, there is still a set up cost. Here is where aggressive creatures shine in applying pressure early so that these engines are on the back foot and have to spend resources to defend themselves. Yet the creatures in the format fail on this front. They are not threatening enough on their own to require removal spells. The best way to attack these decks is to go wide with smaller threats and hope to win before they assume the victory condition. Not that Weather the Storm makes this difficult or anything.

The creatures in Pauper are bad at attacking because they have to be. In order to make Limited interesting and vibrant, not every game of 40-card Magic can be a race from turn one. So what can be done for the format of commons? There need to be more incentives in the vein of Gatecrash. There need to be rewards for attacking with synergy driven threats like Cloudfin Raptor. Pauper wants gold creatures worth the investment in playing two colors that can hit harder than Rip-Clan Crasher. Otherwise, every set cycle we will keep scouring the card list for new playable creatures only to be hit over the head with the latest spell to break through.