My name is Marcus Ewaldh, and I’m addicted to Islands. I usually get my Magic fix in Legacy, tapping them for cards like High Tide, Counterbalance, and Stasis.

A year or two ago Jean-Mary Accart (also known as Lejay) texted me about a crazy Time Walk deck in Modern that wins by chaining turns and drawing extra cards. I usually only play non-Legacy Constructed events if there’s a big tournament coming up, but this time, I drooled over every card I saw in his list.

We began work on the deck together, trying a lot of different cards. The deck was decent, but definitely not tier 1. Howling Mine was a terrible card that you had to play. I put it down until I was allowed to play Ancestral Vision instead of Howling Mine, giving the deck a more consistent draw engine (still paired with Dictate of Kruphix). I put up some 5-0s on Magic Online with a tempo/control/combo version with Snapcaster plus Lightning Bolt as my win condition, but I still struggled in a lot of matchups—the deck was too fair and still too weak to hate (mostly the kind that killed my Dictate of Kruphix).

A month or so before GP Copenhagen, I decided to try As Foretold in the deck, thinking it would synergize well with not only the obvious Ancestral Vision but also with my extra turns. 4 Ancestral Visions were not enough payoff cards to justify it, though, so I needed something else. 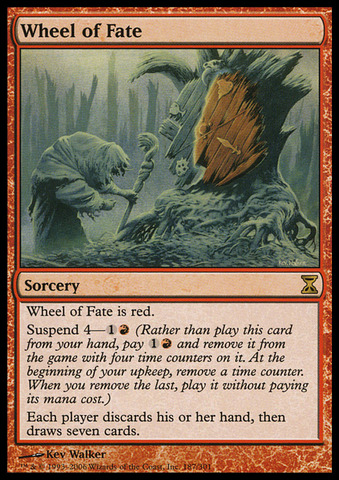 I found Wheel of Fate, and immediately had to rebuild the deck from scratch. Rather than gaining incremental advantage like the previous versions of the deck did, I now had this monstrosity filled with 4-of restricted Vintage cards I could play for free…

Modern is a fast format full of different decks. It’s hard to prepare for all of them, especially in game 1. In my first lists with As Foretold, I tried cards like Remand, Spell Pierce, Lightning Bolt, and Path to Exile, but they all had embarrassing moments. I was looking to make the deck as lean as possible. In Modern, you can’t afford to be reactive and draw the wrong piece of interaction.

Also, the downside of resolving fixed versions of Timetwister and Wheel of Fortune is that your opponent also gets a full grip of cards. If your draw-7 consists of random cards that are good during the set-up phase of the game, rather than broken cards or means to find them, you have to pass the turn and likely lose the game. So to support this new Vintage-like Taking Turns deck, I soon realized that I should brute force my game plan and worry about interaction after sideboard. Instead, I was filling up my empty slots with as many cantrips as possible to dig for the missing piece in each situation.

I would naturally have a weak matchup to Burn, Ad Nauseam, Storm, and most versions of Death’s Shadow, but be a favorite against anything that’s not looking to kill me before turn 4. In Modern, you have to take some risks and hope that your pairings and sideboard are enough anyway.

Next up, I had to decide how to win the game. I don’t like win conditions. In the kind of decks I enjoy, spending a card on something just to win the game is often a mulligan until that point. There are some alternatives that are “good on their own” that I tried to include—Part the Waterveil, Snapcaster Mage, Jace, Vryn’s Prodigy, and Vendilion Clique—but was annoyed by the fact that these would make my opponent’s otherwise blank Fatal Pushes and Path to Exiles worth a card again.

I was looking for a way to win that dodged these cards. My friends suggested many options, including Approach of the Second Sun and a Nahiri, the Harbinger with an Emrakul, the Aeons Torn.

Approach of the Second Sun was a 1-card win condition that synergized well with my deck, but the fact remains that it’s still not worth a card. I was pretty impressed by Nahiri, but Emrakul was not a card I’d enjoy seeing in my starting 7. I was sold on a planeswalker kill, though, and I tried almost everything until I was blown away by Chandra, Torch of Defiance a.k.a. the red Jace.

Each of her abilities are relevant to the deck, and exiling a suspend card with her +1 and casting it via As Foretold made her truly broken. Playing only two win conditions isn’t much, but between drawing your whole deck and re-doing it twice with Day’s Undoing you’ll find her. To reliably use Chandra as a draw engine (or land filterer) I had one more reason not to put reactive or situational spells in my deck.

The rest of the deck consists of broken card draw, cantrips, and Time Walks (including Exhaustion). I round things out with 2 Cryptic Commands, a versatile catch-all answer, as well as a pseudo-Time-Walk.

One of the sweet things about this deck is its mana base. It’s more or less immune to Blood Moon (I even ran it myself at some point) and you don’t have to kill yourself fetching shocklands like most decks. The weird splash for double-red Chandra, suspended Wheel, and a few sideboard Pyroclasm comes at a price, but it’s worth it. Having a lot of basics also means that Sulfur Falls is more or less free. 5 fetches is the maximum I’d want because of the nombo with Day’s Undoing, taking unnecessary damage and running out of targets to fetch for. 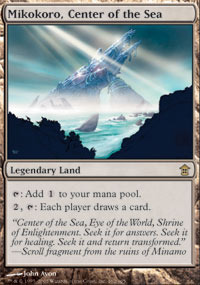 Mikokoro, Center of the Sea is fantastic in both the drawn-out games versus discard, and for when you have a miracle Temporal Mastery and some mana to spare during your opponent’s end step. A Dictate of Kruphix in a pinch! It’s legendary, though, so I wouldn’t want more. There are other viable value lands, but from my testing, I wanted to limit the number of lands that turn off Sulfur Falls. The other utility land I chose to run is Gemstone Caverns—a powerful card in a deck with draw-7s.

I experimented with mana rocks and Simian Spirit Guide, but in the end I had to cut not only lands but also some spells to make room, and I didn’t think it was worth it. If the meta speeds up and you need to be faster, there are other cards I would consider before accelerating my mana, like Gigadrowse.

As mentioned before, the deck really struggles in a few matchups. Combine that with my expectations of the metagame, and you get the 15-card sideboard I ran for the GP. Rather than playing a lot of 1-ofs that could be used in many matchups, I chose to build the sideboard with these decks in mind and play game-changing cards. I wanted to consistently beat Elves, G/W Vizier, various Thalia decks, Living End, Bogles, Lantern, Affinity, and Eldrazi Tron packing Chalice of the Void. With a high density of cantrips and card draw, the effect of powerful sideboard cards is enormous. Modern has a lot of decks and you can’t prepare for all of them, so rather than try to make Ad Nauseam and Burn okay matchups, I just accepted defeat if I was paired against them. On the flip side, if someone was trying to cast a Siege Rhino against me, I wouldn’t need a sideboard.

How Do You Play This Deck?

The deck is pretty hard to play, as without much interaction you have only your life total as a resource. For this reason, it’s OK to mulligan for key components in faster matchups. I hate giving up a card of value, but if there’s any deck that can come back from a mulligan it’s the one with Vintage cards. You are looking for Ancestral Vision, cantrips, and As Foretold in the early stages of the game.

You should prioritize making land drops, but be judicious with your extra turns if you can afford it, as using them for cycling is not great. Using a Time Warp just to make a land drop is fine, but not optimal. There’s no easy rule here, but if your hand is stacked with cards then you can afford to “waste” a time walk effect. If you’re low on card draw, then it’s probably best to hold on to them until you find a payoff card. You don’t want to chain four turns in a row just to lose the game with an Ancestral Vision on 1 counter!

Some plays you’re looking for are Exhaustion plus Day’s Undoing, suspending a card plus Time Warp, and As Foretold plus Wheel plus Exhaustion. Going from no hand to a full hand with an extra turn is something special.

Why Do You Play This Deck?

I love to play control, but in Modern I think it’s a bad idea. Combo can also be rough choice because of the powerful answers people pack in their sideboards. The Time Walk deck is somewhere in between. It’s resilient to hate and consistent enough to beat a swath of disruption from your opponent.

I also enjoy the mind games: Thing in the Ice vs. an opponent who might board out removal. Stranding a Blood Moon pre-board or convincing them that they should play around it post-board. Their silly card advantage or Thoughtseizes. Value isn’t just about cards drawn, but about how your deck lines up against your opponent’s.

Much like Titanshift, this deck can topdeck a win. But unlike Scapeshift, the set-up cards are great at any point in the game, unlike a card like Farseek which has diminishing returns. Even the annoying Temporal Mastery you drew turn 2 can be of good use once you go off.

It’s also one of the most fun decks I have ever played.

Want to see the deck in action? Check out round 4 and round 7 of GP Copenhagen!

From Sweden, Marcus has been playing Magic since 1995, though he primarily plays on Magic Online under the handle Truckis. His proudest achievement? Splitting the finals of an online Legacy Challenge before going on to win the Danish Legacy Masters the same day.