Welcome to the conclusion of this week’s What’s the Play?

In part 1, I laid out a scenario, and today I’m going to talk about what I’d do in that scenario.

It’s now game 1 against what appears to be Temur Aggro. You mulliganed on the draw and went Fleecemane Lion into Anafenza while your opponent played turn-two Boon Satyr off Elvish Mystic into turn-three double Heir of the Wilds. The Anafenza got Roasted, and you traded Fleecemane for one of your opponent’s Heirs, taking a hit from the other—with the Boon Satyr and Elvish Mystic staying home the entire game so far.

The board looks like so on the start of your fourth turn main phase: 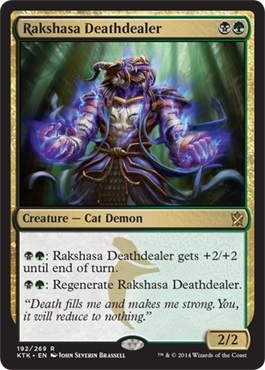 This scenario is a little more complicated than the one from last week, but the decision trees are actually simpler. Also, in contrast to last week, the answer is more definitive (at least according to the pros I consulted).

Note: This answer not recommended

Snap-conceding aside, the first thing you need to consider is: why did your opponent do what they did? 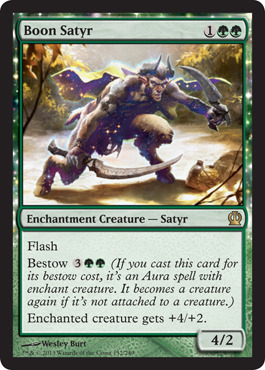 In this case, your opponent chose not to attack with Boon Satyr into Fleecemane Lion, opting to attack with both Heirs of the Wilds instead. That play should raise some eyebrows, and the most reasonable conclusion that I drew from it is that the opponent really wanted to keep ferocious active. Heir of the Wilds has ferocious, but that isn’t compelling enough, so the card I naturally move to is Stubborn Denial.

Given that Stubborn Denial is on your mind, where do you go from there?

I look at what my options are. In this case, you can subdivide by mana cost, because your cards are so redundant (which is not uncommon in Abzan Aggro).

The most tempting play is to use Abzan Charm to kill Boon Satyr (keeping Hero’s Downfall for Stormbreath, given that you are unlikely to want the other modes on the Charm this game). That leaves the opponent with 3 power in play and creatures that are outclassed by yours. The main argument against casting a spell is the Stubborn Denial I mentioned previously. It just seems too likely to be in the opponent’s hand, and if your play this turn gets denied, you are highly likely to lose. Given that the other options are close, the hints the opponent has given me lead me to rule this play out.

Being on three lands and having three 3-drops and two 2-drops make it important to play a 3-mana card. The possibility of getting to draw land #4 and play two cards is extremely alluring, and given that all the cards here are accomplishing similar things, playing two cards is almost like getting an extra turn. You are also unlikely to lose this game if you do get to cast your cards, and ending up with unused cards in hand is a real possibility, so by casting as many as possible you give yourself the best shot to win.

Trading the best creature in your hand for Boon Satyr seems like an odd way to go, but that is the play I would make. By playing Anafenza and blocking Boon Satyr, you give yourself the highest odds of getting to overpower the opponent with your handful of cards. Because you are so far ahead on cards, trading down in this manner is worth it, and going with Anafenza avoids a Stubborn Denial blowout while giving you a chance to play two cards next turn if you draw an untapped land.

Cast Anafenza with the intention of trading her for Boon Satyr if it attacks (and Heir of the Wilds if Boon Satyr does not attack).

Huey summed it up eloquently here, and even though I took longer to explain why I came to this conclusion, I think it’s worth going through each decision tree and what makes some choices better than others.

I’m always on the lookout for interesting scenarios, so feel free to email me at [email protected] with ones you think qualify (from basically any format).

I’ll be back this Thursday with a new scenario. Let me know what you liked or didn’t like about this one, and rest assured that I’ll be using other formats to assemble these as I do more of them.