To the shock of no one a week one tournament was taken down by an established deck with a high level of raw power. Three of the Top 4 slots were taken up by this deck and there isn’t much to say about it. Powerful cards are great against the vast majority of brews and unrefined strategies. Dragonlord Atarka and Genesis Hydra are among the best things you could possibly do in the format and some lists went even further! I see you, sideboard singleton Nissa’s Revelation.

Since the decks themselves aren’t particularly novel or interesting at this venture let’s talk about what this means for the metagame. Honestly? It may have a minor impact in that it showcased that Languish is not enough to keep a good monster down and cards like Hidden Dragonslayer and Tragic Arrogance are looking better and better. The bigger metagame impact is that while Abzan Control saw a huge amount of play and Top 64 penetration, older control can and should adapt to biggums. Outside of Hoogland’s UW Control Thopter deck, everything in that Top 8 looks soft to a well metagamed UBx Control shell.

Perhaps Adrian Sullivan will get to enjoy one more Pro Tour with whatever UB concoction he brings to the table. Or maybe the week one metagame post-Origins will simply be that—a one-shot occurrence while people are still piecing together what is and isn’t good from Origins. In that vein there are other kinds of devotion you could explore.

I talked about White Devotion last week as a brew with potential. Two MWD made the Top 64, and Jordan later posted about how his deck felt.

I’m the guy who played the mono white devotion deck that placed 14th, Jordan Haukereid. Just wanted to leave a few of my thoughts about the deck. SOLDIER OF THE PANTHEON IS AWFUL, SERIOUSLY! I boarded out Soldiers vs. everyone I played against and brought in Elspeth vs. everyone but one person. The deck doesn’t really need to be aggressive at all, and the 4 Soldiers should be cut from the main for probably Elspeth, maybe another Gideon or two, or a fourth Wingmate Roc. 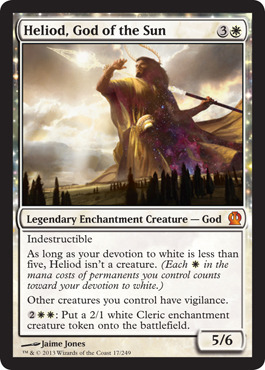 Sure enough, the deck simply doesn’t want to be aggro. Maybe there’s a version that does, but this one does not. Soldier does very little here and when I tried the deck even Kytheon was a bit disappointing compared to the other options. If big green decks are still major players then maindecking Elspeth, Sun’s Champion is a great decision. Being able to wipe the major creatures and also give the deck something strong to power out quickly with Nykthos would be a boon.

Surprisingly that may not even be the best land in the deck, Foundry of the Consuls is a nice little addition that adds even more fliers and gives the deck another way to remain resilient to sweepers. Spear of Heliod and Ajani Steadfast don’t make the tokens into monsters, but any increase in the clock can be very relevant when the opponent is angling toward a clear board. Another thing this weekend has shown is how good flyers are in the abstract, Abzan Control and a number of other midrange decks have a tough time dealing with the flying beatdown.

Moving forward I’d like to give this a shot:

Additionally, with the 1-drops gone, this leaves a lot more room to play around with scry lands and potential splashes. Trying something like Outpost Siege or a blue drawing option isn’t out of the realm of possibility. It could also open up more ways to deal with GR Devotion post-board and keep the creatures in check.

I saw the usual backlash against the most hyped (read: expensive) of the new cards from Magic Origins. But Nissa showed up in nearly every single Abzan Control deck as 2- or 3-of in the main deck and she made appearances in a handful of other decks. While it doesn’t happen too often, sometimes cards do live up to the hype. Of course, there were plenty of other cards that also caused some sideways looks.

Deck of the Week: UW Thopters

Jeff Hoogland had the standout deck of the tournament combining Bident Blossom (Thopter Spy Network) in a traditional UW Control shell. Darksteel Citadel isn’t a large sacrifice in mana consistency and once you add those you only need a few more artifacts to consistently trigger the spies. Hangarback Walker was the solution Jeff had and it’s one that will likely be looked at in-depth before the Pro Tour. Jamming a Hangarback Walker on turn two like Steel Overseer provides a similar level of scariness, except you don’t feel embarrassed if it gets blown up. Ultimately a card like Chronomaton and Overseer needed something to mitigate investing all that mana and time and losing it to a Hero’s Downfall.

What it also does is provide a scaling threat where you can potentially block in the midgame and retain a very scary threat in the late game. With the cards available to WU Control you now don’t need to play dedicated win conditions. Your creatures and noncreature threats can all do useful things other than trying to end the game. If there was a deck people will be likely interested in, this would be it. Start with reworking the sideboard a bit for your local meta, and have a good time with this one.