As far as I can tell, it’s the most powerful deck in the history of Magic.

I’m a long-time fan of Vintage Storm Combo, and it’s rare for me to get excited about anything other than my Dark Rituals and Yawgmoth’s Bargains. (Or rather, Bargain—singular). But when I saw the Kaladesh spoiler, I had a hunch that Paradoxical Outcome might be something special. 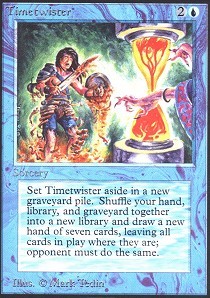 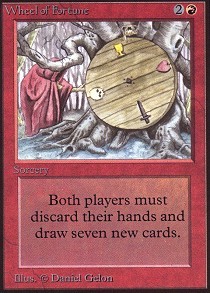 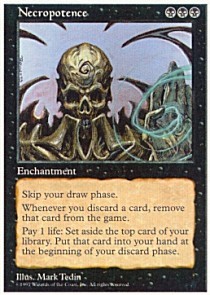 Some of Magic’s most powerful cards are the ones that draw you extra cards. Timetwister, Wheel of Fortune, and Necropotence, for example.

Some of Magic’s most powerful cards are the ones that generate fast mana. Black Lotus, Dark Ritual, and the Moxen, for example.

But what are truly special are the ones that can do both at the same time, representing the entirety of an unstoppable engine, all rolled into a single card. In the past, Yawgmoth’s Will and Time Spiral have fit the mold. Now we get to add Paradoxical Outcome to the list.

The goal is to get a few pieces of artifact mana into play and use them to cast Paradoxical Outcome, which draws some cards and “resets” the artifacts (you will be able to play them again untapped). Often, this will draw you into more artifacts and another copy of Paradoxical Outcome, which you can cast for an even bigger effect. In this way, things snowball until you can draw your whole library and win the game as you see fit. 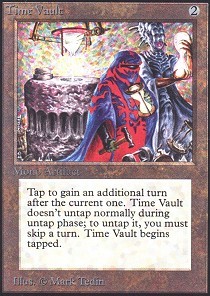 It’s worth noting that Paradoxical Outcome can fit into a number of Vintage shells, and you can win in plenty of creative ways. One natural fit is Time Vault and Voltaic Key (perhaps paired with a couple of Tezzeret, the Seekers). Other players were using it alongside Monastery Mentor. When you fully combo off, you can make an army of monk tokens, cast Time Walk, and win the game. When you don’t combo, you have an effective Plan B as a U/W Control deck.

Me? Call me old fashioned, but I opted for a single copy of Tendrils of Agony. There’s value in devoting the smallest possible number of slots to your win condition. Having Tendrils also allows you to stumble upon the Black Lotus into Demonic Tutor, into Yawgmoth’s Will draws that Traditional Storm Combo loves so much.

Since it’s all about achieving critical mass for Paradoxical Outcome, the most common play pattern with this deck usually involves a “preliminary” card draw spell. This could be a “draw-seven” like Timetwister or Wheel of Fortune, or it could be using a Merchant Scroll or Demonic Tutor to find Ancestral Recall. By the time you’ve done that, you’ve typically found enough artifacts to begin an inexorable chain of card drawing, and win the game.

Since Paradoxical Outcome Storm is primarily a blue deck—it’s tempting to build a very conservative mana base (perhaps even utilizing Seat of the Synod). But it would be a mistake to give up on the ultra-powerful Wheel of Fortune. Even though the cost is adding a full extra color, Wheel of Fortune is simply one of the best cards in the deck.

How Fast Is It?

Paradoxical Outcome Storm has comparable speed to more traditional Dark Ritual-based Storm decks. Undisrupted, it can win on turn 1 between 15% and 20% of the time. It will win by turn 2 something in the ballpark of 70% of the time.

Now “undisrupted” is very ambitious to hope for since the Vintage metagame is divided between Mishra’s Workshop decks, disruptive creature decks, and permission decks. Thankfully, I believe that Paradoxical Outcome Storm is stronger than other combo decks against all three of these.

For starters, having enough blue cards to support Force of Will gives the deck a fighting chance against permanent-based disruption, even when you lose the die roll. Whereas Traditional Storm lives in fear of a turn 1 Trinisphere, Paradoxical Outcome Storm can at least hope to cast Force of Will and earn a turn of reprieve.

The other major difference is having all artifact mana instead of Rituals. Against something like Workshops, you can put your mana into play in advance of a Sphere of Resistance. Against permission decks, your entire game plan need not crumble when the big spell you’ve accelerated out gets countered. Finally, whereas Mental Misstep is one of the absolute best cards against Dark Ritual decks, it actually has very few exciting targets against Paradoxical Outcome Storm.

Looking at the big picture, this deck occupies the same position in the metagame as Traditional Storm. It’s going to be a modest favorite against opposing blue decks and against certain miscellaneous decks like Dredge. It’s going to be an underdog against the most hateful of the Mishra’s Workshop decks. That said, I believe that the printing of Paradoxical Outcome likely leads to a small improvement in speed and consistency, and a sizable improvement in resilience to hate.

By bumping the raw power level up a notch, I believe that Kaladesh and Paradoxical Outcome can take a deck that’s been struggling a bit in Vintage, and bring it right back to tier 1 status. I won’t claim that you’re making a mistake to sleeve up your Mishra’s Workshops or Monastery Mentors, but I will say that Vintage Combo is the strongest it’s been for many years. Until something gets restricted, I personally won’t be caught dead without 4 Mox Opals in my deck!