Standard Vampires, Scapeshift, and Some Brews

Standard with Core Set 2020 is a strange beast. For the small window of a few months, the format is swollen to its maximum possible size, with all cards from Ixalan to now legal. This leads to powerful pairings like Scapeshift and Field of the Dead, or Champion of Dusk and Sorin, Imperious Bloodlord being possible from now until September.

While we shouldn’t get too comfortable with the format as it stands, it’s still important to understand what’s going on in order to be competitive now, and to be in the best position to dive into Throne of Eldraine in September. 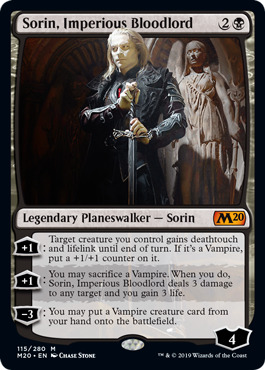 Vampires has much the same feel as the old White Weenie decks. In both cases, Legion’s Landing, Skymarcher Aspirant, and Adanto Vanguard make up the bread and butter early plays. However, Vampires takes things to a whole new level with the new printings of Knight of the Ebon Legion and Sorin, Imperious Bloodlord. In particular, Sorin is an absolute powerhouse. Having a planeswalker to dominate the board, provide reach, and power out Champion of Dusk for card advantage makes Vampires much more of a multidimensional deck than its White Weenie predecessor ever was.

Take one of the fastest decks in the format, give it reach, staying power, and disruption, and you have something that’s very difficult to beat. In the first round of Magic Pro League weekly play, six of the eight competitors chose to bring Vampires. This gives you a picture of how this deck is perceived at the highest levels of play. I recently competed in the Fandom Legends streamer tournament, and the story was much the same–Vampires was the most popular choice by far and it dramatically outperformed expectations.

When a deck is this strong, it’s best to keep it simple. Mostly creatures, plus a couple of well-placed removal spells–it’s the best way to be consistent and maximize the power of your Sorins. One card that’s worth a mention is Legion’s End, which I believe is the best removal spell in Standard right now. It’s one of the best cards against Vampires, since it cleanly answers Adanto Vanguard while also giving you a fair chance of nabbing multiple copies of a four-of. It’s also crucial against Scapeshift, since it can wipe out a wave of Zombies, or clear out all the Hydroid Krasis from the opponent’s hand.

I’ve seen Vampires players employ quite a bit of different technology in an attempt to gain an edge in the mirror match: Things ranging from Ajani, Adversary of Tyrants, to Plague Mare, to Vona, Butcher of Magan. The card that’s most appealing to me is Finale of Eternity, which has impressed me in a variety of decks and matchups but seems at its absolute best in a small creature mirror, where it can often act as a low-cost Plague Wind. 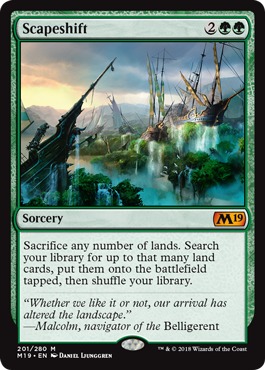 Scapeshift is the second leg on which the format stands. Just like Vampires, it’s had no shortage of success. It was the winner of both Grand Prix Denver, and the Redbull Untapped Series in the hands of Luis Scott-Vargas and Lino Burgold, respectively.

The Scapeshift deck really has it all. It’s a ramp deck that utilizes many of the best cards in the format–like Hydroid Krasis and Teferi, Time Raveler–while also generating incidental value from its mana base. On top of all of that, it has a combo finish. And on top of all of that, even if the opponent answers your combo, you’re left with a huge collection of value lands, and can rebuild your Zombie army every turn thereafter.

In short, beating Scapeshift is no easy feat. The best way to do so is to simply race; try to kill them before they can start making zombies off of Field of the Dead. Cards like Legion’s End, Flame Sweep, and Deputy of Detention are good ways to clear the path for one final attack, if you can put yourself in a position to win the game on the turn they cast their Scapeshift. However, these cards will not win the matchup for you on their own.

Perhaps the best thing about Scapeshift (or the worst thing, depending on your perspective), is Veil of Summer. The presence of this card in the sideboard means that any of the weapons you’d ordinarily turn to in order to stop a combo deck–Duress, Thought Erasure, Negate, Unmoored Ego–can be stopped at a profit for the low price of one mana. Veil of Summer is so powerful that I’m not even completely convinced that I want permission and discard spells against Scapeshift! Note that the combination of Teferi, Time Raveler and discard/permission can still be effective.

There are plenty of other viable decks in Standard. Expert players can find success with many varieties of Esper and Bant, Mono-Red, Dinosaurs, Nexus of Fate, Feather, and a number of rogue options. However, none of these decks have quite the power or well-roundedness of Vampires and Scapeshift. For competitive play right now, it seems as though beating the two pillars of the format is the primary battle.

Unfortunately, this is easier said than done. The best way to beat Scapeshift is to be fast, while beating Vampires requires board sweepers and a way to slam the door before they regain their footing. These two decks pose quite the challenge. But I found inspiration from Andrew Cuneo’s Dimir Control deck, which he used to reach the Top 4 of his MPL division.

This was described to me as an “anti-Vampires deck.” As mentioned above, I’ve found Legion’s End to be the single best card against Vampires, and a deck that can comfortably maindeck four copies has a lot of appeal. Cry of the Carnarium is no slouch either.

Cuneo is almost certainly an underdog in game one against Scapeshift, but he can use his sideboard to try and correct the weakness. He decided to use Unmoored Ego as his weapon of choice, but personally, I’m much more interested in Ashiok, Dream Render. While it’s still not perfect, playing multiple Ashioks feels like a bit more of a concerted gameplan, while also reducing the potency of Veil of Summer.

To make a long story short, I like the idea and the shell of the deck, but the win conditions in blue and black leave something to be desired. Let’s see if we can find something a little flashier!

In my experience, I’ve liked Nicol Bolas (both flavors) much more than God-Eternal Kefnet. Red also allows you to upgrade your removal suite with Bedevil and Fry, as well as plenty of other options that didn’t make it into my list.

I’m also excited to find a home for Chandra, Awakened Inferno. The new Chandra seems to have it all, as a repeatable board sweeper against Vampires and an uncounterable, inexorable threat against slower decks. I particularly like the way a single emblem can be a major headache for a Nexus of Fate player, even if they’re able to combo off after you tap out.

If the cards I most want to play with are Legion’s End and Ashiok, Dream Render, then there’s no reason to feel attached to the color blue. There are other directions I might be able to take things.

Golgari is an archetype I’ve revisited a lot since its golden age in Guilds of Ravnica. Temple of Malady and Bolas’s Citadel are two awesome additions. Equally important, the top-end sweepers of Massacre Girl and Find // Finality might just be the perfect way to combat Vampires. Smaller sweepers like Cry of the Carnarium and Kaya’s Wrath are solid weapons, but the Vampires players can always rebuild using their planeswalkers and the card advantage from Champion of Dusk. Massacre Girl and Finality tend to leave you in such a favorable position that you can slam the door in short order.

Those are a couple of ideas for attacking the Standard metagame. Make no mistake, however, that Vampires and Scapeshift are great decks that will never go down without a fight. If you don’t feel confident in your ability to beat’em, it could simply be better to join’em. After all, this might be the one chance to pick up these decks at their maximum power level, before next month’s rotation.