Even after years of practice, I still find Legacy Elves to be one of the most challenging decks to pilot.

This might come as a surprise. After all, many Elves games look relatively simple from an outside perspective. You draw a ton of cards, you generate more mana than anyone could ever need, and you have a one-card combo that tends to overkill the opponent by about 50 damage. Elves is powerful and explosive, and it has some lopsided matchups. Because of that, it is indeed true that some games are easy. If you can count to four, you can win plenty of games with Legacy Elves.

But when the games aren’t straightforward and one-sided, they’re complicated to navigate. How can you reach critical mass when your opponent is pressuring your resources? How can you work around a disruptive permanent from an opposing Death and Taxes or Eldrazi deck? How do you decide what to play around when permission, discard, spot removal, board sweepers, and land destruction can all punish you in such different and painful ways?

When you first pick up Elves, learning the mechanics, getting a feel for the deck, and identifying all of the two-card interactions should be the first order of business. Even mastering these aspects is not easy, and if you work hard enough to do so, then you have what it takes to be a very accomplished Legacy player. That said, the two pieces of advice I’ll offer in this article aren’t ones I figured out in the first day, week, or month that I picked up the deck. They’re lessons that I only came to learn after hundreds of matches in dozens of tournaments across half a decade.

Make Dryad Arbor Work For You

Over the years, I’ve played a lot of Dryad Arbors in a lot of different decks. But all of these decks have included Dryad Arbor for one of two simple reasons. Either they want the ability to cast Green Sun’s Zenith for zero—like in an Abzan or Maverick deck—or they want insurance against Diabolic Edict effects—like in Infect or Dark Depths. Dryad Arbor tends to be a marginal card that’s included because the cost is low and you can get a bit of value here and there.

In Legacy Elves, Dryad Arbor is much, much more than that. Getting Dryad Arbor into play is an extremely powerful and important aspect of piloting Elves. Every warm body contributes to Gaea’s Cradle and Craterhoof Behemoth. When you can untap with a non-summoning sick Arbor, you get a creature that reliably taps for mana, which generates huge value alongside Wirewood Symbiote and Quirion Ranger. Finally, when paired with Quirion Ranger, Dryad Arbor allows you to develop your board without the risk of losing everything to a board sweeper.

In short, Dryad Arbor pulls far more weight in Legacy Elves than it does in any other deck. Learn this quickly and adjust your play accordingly. You should sometimes be willing to slow yourself down and go pretty far out of your way to ensure that your fetchlands are turning into Dryad Arbors instead of basic Forests.

Dryad Arbor is more important in the games that are close and challenging than in the games that are easy. Some games you have turn-1 Deathrite Shaman into turn-2 Nettle Sentinel, Heritage Druid, Gaea’s Cradle, and more action. When everything is going perfectly, feel free to ignore Dryad Arbor! It’s when you mulligan to six and get Hymn to Tourached before your second turn that you’re going to need the help of the little Dryad.

When you think only in terms of the first two questions, Dryad Arbor is generally poor. It’s the least powerful creature in the deck, and its summoning sickness can hinder you from developing your board. Moreover, taking a slower line and getting Wastelanded or Lightning Bolted can have negative outcomes for the next two turns.

But fetching Dryad Arbor can make your position more robust and generate more power in the long run. Sometimes you won’t need that, but sometimes you will. When I mulligan to five with Elves, the opening line I’m hoping for is: Windswept Heath and pass the turn. I can fetch Dryad Arbor, and if everything goes well I can use it to cast a 1-drop Elf and play another fetchland. Now I can begin turn 3 with three creatures in play and four cards remaining in my hand, which is a relatively great position for a game where I started with such a catastrophic resource disadvantage.

Tactics like this make Gaea’s Cradle, Quirion Ranger, and Wirewood Symbiote more powerful. They can also put a low-resource Craterhoof Behemoth over the top for a lethal attack. Taking it a little slower also gives you more opportunity for Glimpse of Nature to be powerful, since you don’t play out your hand too early.

When your hand isn’t perfect and you feel like you need a little something extra to win the game, turn to your Dryad Arbors for help. They won’t disappoint you.

By most standards, the Elves mirror match is a nightmare pairing. In game 1, neither player can disrupt the other and, left to its own devices, Elves goldfishes on turn 3 (exactly turn 3) in a very, very large portion of games. Under such conditions, it’s difficult to break serve, and unless something strange happens, the die roll effectively tells you who’s going to win.

In spite of this, I’ve historically won the Elves mirror a lot more than I’ve lost it. What’s my secret? Nothing.

The reason that this strategy works more often than it fails is that sometimes your opponents will overthink things. They’ll hurt their own chances by oversideboarding and trying to control the game when they should really just be rushing for a Craterhoof Behemoth.

When I’m on the draw in the Elves mirror, I’ll typically bring in between one and three Thoughtseizes, and—quite frankly—I’m not even sure if that’s the right decision. Thoughtseize is somewhat ineffective, buys you less than one turn on average, and hinders your own development more than your opponent’s (since you’re spending mana to answer a card that they haven’t spent mana on). Bringing in Thoughtseize is defensible on the draw only because you have to do something special in order to break serve.

On the play, I sideboard nothing, unless I have something like a Reclamation Sage to take out of my main deck.

I’ve picked the somewhat specific example of the Legacy Elves mirror to illustrate a point that’s important for all tribal decks and all combo decks across all formats. Keep it simple! Every card that doesn’t contribute to your synergy comes at a real cost. And for a deck as powerful as Legacy Elves, you simply don’t need them.

My deck list is as simple as it gets. Even cards like Scavenging Ooze and Reclamation Sage, which appear in tons of deck lists, are luxury cards that you usually don’t need. The main deck does one thing, and does it as well as it possibly can. For most fair matchups, I’m sideboarding very few cards.

When you play a matchup where your primary game plan works—like the mirror match or a Delver deck—you should just stick with it. You can make small swaps like a Progenitus for a Craterhoof Behemoth, or an Abrupt Decay or two if you want to hedge against Grim Lavamancer. But for the most part you’re only hurting yourself if you dilute your game plan too much.

I think that declining to sideboard scares a lot of Magic players. You want to feel like you’re improving, and when you don’t bring any new cards in, you may feel as if you’ve come unprepared for the matchup. But the fact that Elves sideboards so little in so many matchups isn’t a weakness—it’s a strength!

It means that you can dedicate almost your whole sideboard—for me it’s eleven cards—to beating fast combo. This is great for two reasons: first, fast combo decks are your bad matchups, and second, sideboard cards against combo decks tend to be more potent (think Mindbreak Trap against Storm) than the marginal upgrades you’d be trying to make against creature decks. 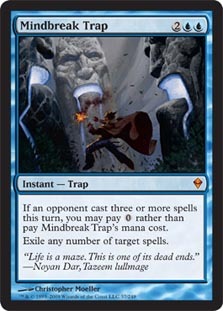 In other words, Elves is significantly favored against almost all non-combo decks in game 1, and you get to sideboard nearly a dozen cards against the combo decks that you decide to gun for! I’ll graciously admit that I have no secret tech to improve against Delver, when my reward is actually being able to win matches against Storm and Reanimator.

So there you have it—two pieces of advice that, while not necessarily earth-shattering, may not be obvious to someone picking up Elves for the first time. Since the banning of Sensei’s Divining Top, Elves has reclaimed its place as one of the stronger decks in Legacy, and is one of the very few decks that can legitimately claim a favorable matchup against Delver. If it’s a deck that appeals to you, putting in the time and effort to master it will be a rewarding decision. And I hope this article can give you a head start.