Gruul decks are not really my cup of tea, but with Core Set 2020 there are two cards screaming to be built around: Marauding Raptor and Chandra, Awakened Inferno. I wanted to play decks with them as soon as I could, and I want to share those lists today, as well as a bonus Goblins deck. 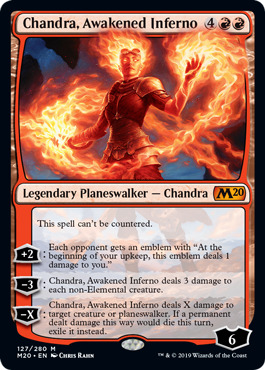 The combination of Nissa, Who Shakes the World and Chandra, Awakened Inferno is very much real, as Nissa produces Elementals and Chandra takes care of everything but Elementals.

But Chandra’s ability is so much more than just a Sweltering Suns–Chandra will be the reason Esper Control will cease to exist. The Immortal Sun out of Gruul was laughable to me as an Esper Control player, as it was easy to immediately answer with Despark or Ixalan’s Binding without having provided any sort of card advantage. Chandra comes into play immediately plusses to give a Curse of the Pierced Heart to your opponent that they can’t ever remove. The fact that she’s uncounterable isn’t really a big deal in a format where countermagic has already been pushed out, but it doesn’t hurt. Her last ability is very versatile, able to take care of any Lyra Dawnbringer that they might sideboard against you.

In order to ramp up to these 5 and 6-drops, we need some mana ramp in the form of Llanowar Elves and Paradise Druid. I thought about adding more, but the nombo with Chandra’s -3 is too problematic, so we have mana ramp in the form of Domri, Anarch of Bolas and Kiora, Behemoth Beckoner. And since we have so many planeswalkers, why not add a couple of Sarkhan the Masterless to get in with all of them? 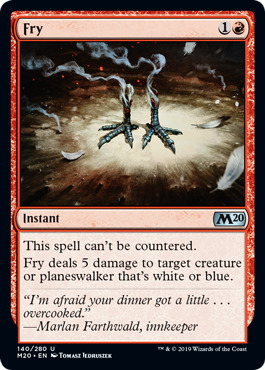 Fry will be a huge card for red decks to deal with both Teferis, Lyra Dawnbringer, Basilica Bell-Haunt and Hero of Precinct One. It will be a must-have 4-of in every Mono-Red sideboard and will make the matchup against Esper even better along with Chandra, Awakened Inferno. 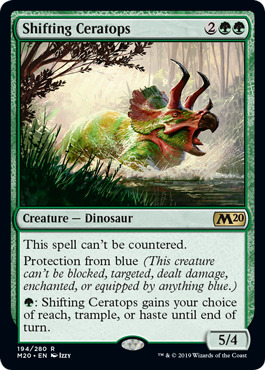 Shifting Ceratops is another great new toy similar to Charging Monstrosaur, but it can also block any fliers. An aggressive deck is exactly where it wants to be.

This list comes from Crokeyz, and I had the pleasure to pilot it during the Early Access Stream and won a lot of games with it. 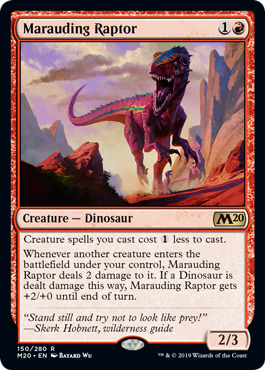 I was incredibly impressed by Marauding Raptor, as the card just does so much for so little mana. The curve of Marauding Raptor into Ripjaw Raptor is all you want to do, getting to immediately draw an extra card and attack for 4! Cost reduction in a 23-land deck is great, because it allows you to cut lands while still playing your 4 and 5-drops. Unfortunately, this means we cannot play Growth-Chamber Guardian, and must replace it with Thorn Lieutenant so we have a two-drop that will survive the Marauder’s ability.

People have asked me why I’m playing 4 copies of Charging Monstrosaur over the third and fourth copy of Shifting Ceratops, as they are very similar when played with 5 mana, but one can be cast a turn earlier. The answer revealed itself on stream when I cast Charging Monstrosaur with 2 Marauding Raptor in play–the Ceratops would have died, but the Monstrosaur didn’t and instead my opponent did.

The deck was cool, but often clunky. It’s very mana-hungry, and the draws where you stick a Goblin Warchief are much better than the ones where you don’t have it. Legion Warboss and Goblin Chainwhirler will win a lot of games, just because they are very good cards. Replacing burn spells and Light Up the Stage with mediocre Goblins isn’t exciting, but when your Goblin Ringleader is nearly guaranteed to draw around 2-3 cards, it’s definitely worth it. I don’t think this deck will be better than regular Mono-Red, but it’s something new and cool that we can toy with in this very large Standard.