5 Articles from Around the Web

Gendering Opponents: Something Not Mattering to You Doesn’t Mean it Matters to Nobody

I don’t spot a ton of editing-relevant posts from around the web, so I was excited to see AJ Sacher make a post about something that affects my work. Tons of writers habitually refer to an assumed male opponent, and I consider catching those slips pretty important. AJ does a good job of explaining why.

Get a look into the life and preparation of a Pro Tour Champion, Jaroslava Stefankova interviews Lukas Blohon about his recent Magic dominance, the players that helped make him the competitor he is today, and his favorite deck of all time.

This has been a strange format. It looked like Bant Company would dominate for the next few months unopposed, the Pros at PT Eldritch Moon blew Bant Company away with their innovations and then… Bant Company continued to dominate. Florian Reiter documents he and his teamates’ attempts to solve this problem in Rimini, through an updated UR Fevered Visions and his own Temur Emerge build.

A Guide to Bant Company

In the end, though, maybe Bant is still on top for good reason. Petr Socheruk at HareruyaMTG took 2nd at GP Rimini, and shows you how to play the list he did it with.

The Creation of Magic: The Gathering’s First Black Woman Planewalker

This is my favorite post I’ve read since introducing this column. I was so pleased to learn that Wizards brought in a consultant to design Magic’s first black woman planeswalker, and I was heartened to see their genuine interest in enriching the diversity of the game. Monique at Nerds of Color talks about her role in the creation of Kaya, Ghost Assassin from Conspiracy: Take the Crown. A fascinating piece of writing, don’t miss it. 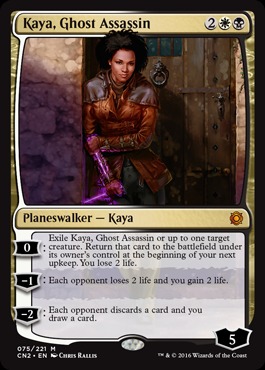 I knew Owen had a winner on his hands with this piece from the first paragraph. I’d always felt funny when I was accused of slowrolling, like I had to admit to either being too slow to figure out I had won (reality) or that I was being a jerk (probably also true, but for other reasons). Owen effectively lays out the damage this norm can cause, by costing you equity in-game and punishing the viewers at home when you’re on camera.

Top 8 Tips for Winning with Affinity

If you’re planning to play Affinity you can’t find a better way to prepare than a Frank Karsten article. He shares his latest list, sideboarding, and tips and tricks.

Andrea Mengucci’s love for Jund has placed him in the same midrange-obsessive company as Reid Duke and Willy Edel. He’s got a few big updates with Eldritch Moon in Modern, from Grim Flayer to Bedlam Reveler.

Dial It Back Six Months

I don’t get a ton of time to play Magic these days, but occasionally a writer inspires me to fire up MTGO, buy more cards than I should, and jump into a League. BBD’s article on Bant Eldrazi had me eager to play some Modern before GP Indy—see if it catches your eye as well.

How Dredge Made Affinity Better

Brian DeMars makes a compelling case for Affinity, based on the idea that with Dredge hate on the upswing, players will have to make room in their sideboards somewhere. Brian’s betting that artifact hate is the first slot they’ll trim.

Legacy would be a better format without Brainstorm? #FactOrFiction

From Uncommon to Mythic in #MTGCN2, is Berserk the only card to join Force of Will in this elite club? pic.twitter.com/9gQQ02gylb

Tags: This Week in Magic

Andrew Cooperfauss is an inveterate PTQ grinder who made his first Pro Tour appearance at PT Philadelphia, but remains intently focused on his true love—Cube drafting. He dreams of returning to the biggest stage in competitive Magic, to 0-4 drop and Cube throughout Day 2.