First of all, thanks for all the feedback on last week’s ban discussion, and I received a lot of requests to write about this new metagame. Everything has been in such upheaval, to the point that it’s difficult to say what the metagame will be. So let’s start with the obvious—Splinter Twin 2.0—the Copy Cat combo. What’s better than 2-card infinite combos? How about a shell that draws a lot of cards by blinking permanents?

Notably, there are 3 infinite combos here, the one between Saheeli and Felidar Guardian and… can you spot the second and third?

Throw in any other creature and you get… 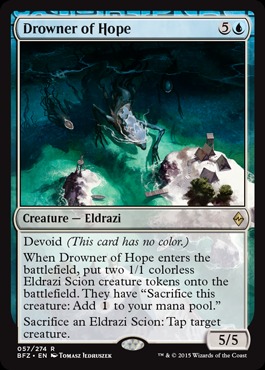 The third one: Panharmonicon, Drowner of Hope, and Eldrazi Displacer are a fun mini-combo for infinite mana and Eldrazi Scion.

This is without even trying to find creatures that are good with infinite blinks—all of these you were already jamming in the Panharmonicon deck in the first place. It creates yet another win condition in a deck that didn’t really need more. Aetherworks Marvel was another suggestion that could be slotted into a more energy-centric iteration of this deck, which would give it yet another digging option.

What’s unique about this take on the strategy is that the Panharmonicon deck was already well situated against aggro, whereas many of the other early iterations of the deck were not. Of course, losing Reflector Mage is a blow, and Vehicles still present a real clock. One of the biggest drawbacks to fitting in the Saheelis is just how useless she is early on, which adds to your clunky mulligans. While Felidar Guardian blocks well, it doesn’t actually trade.

You are also affected by one of the other recent bannings: Smuggler’s Copter was uniquely qualified for this deck because it was a good 2-drop. In case you didn’t notice from the previous format, the 2-drop options for this deck range from situational to complete trash. If you go the Bant or 4c route then you can jam Servant of the Conduit for mana-fixing, but the rest are pretty bad.

This is why I’m willing to try Harnessed Lightning to take out creatures early. Stasis Snare is another option, but that one is yet another 3-drop in a deck full of them. What this comes down to is how much you can afford to sacrifice in your curve, and I’m not willing to make it even worse for a marginally better removal spell. Of course, the fact that Snare stops the combo in the mirror may overwrite that concern and force its inclusion.

One option I considered but haven’t explored yet is the use of Ajani Unyielding or Nahiri, the Harbinger to dig and provide some punch. You already clog the ground well, and while Saheeli is a necessary evil, you don’t really have the means to look for your combo consistently. Most of the games you get going with Panharmonicon you’ll win by drawing 6-8 extra cards and out-resourcing them—the combo just cleans up quicker. If they can disrupt you, or if you need to find a Panharmonicon or a second combo piece, then these go a long way towards providing some consistent draw power.

You can also go the Brad Nelson route and test a build with Glint-Nest Crane and heavier artifact count. I’m sure someone will even try Metalwork Colossus and Copy Cat in the same shell. You can also run Gonti’s Aether Heart and have something to do with all that excess energy, setting up a Time Walk into a lethal attack, or simply spread out your combo while always having mana open.

That’s a lot of words on one combo though—let’s look at another option, building around Baral, Chief of Compliance. Assuming for a second that various flavors of Copy Cat are tier 1, why not build around a card that allows for an even stronger draw-go package?

I’ll be honest, I’m not sure just how good Baral actually is. If people move away from 3 damage removal other than Harnessed Lightning, then it’s a net positive for the Compliance Officer. An early-game wall that acts as a Medallion and loots is quite the set of abilities. Yahenni’s Expertise is here more for being a mini-Languish with a payoff rather than a build-around. Baral’s Expertise may actually be better at doing the same thing since you can play Glimmer of Genius or Kalitas, Traitor of Ghet off of it.

A number of people asked why I wouldn’t just include Copy Cat in control shells, and the main reason is that Twinless Twin is better than Twin in the mirror. You never tap out at sorcery speed and you can run more countermagic and removal. Letting Saheeli resolve isn’t exactly a scary proposition. Other shells have Wandering Fumarole or Shambling Vent, which make it even less of an issue.

If you want to skip Baral to turn off removal game 1 and include planeswalkers instead, that could be a dangerous proposition. Even against non-combo decks, tapping out on 5 allows the game to swing pretty dramatically. Sure, you could wait until 7 mana, but at that point why not just run Confirm Suspicions? Countering a play and eventually drawing 3 cards is reasonable when Aetherworks Marvel and Copy Cat both want to find an opening, and have to throw out some test spells.

The best anti-combo deck could be U/B Control, Jeskai Control, or sideboarding Copy Cat to win the mirror game 1 and play a mind game for games 2 and 3. I’ve already seen a few Aetherworks Marvel decks trying this plan.

Next time I’ll talk about aggro decks and what they can do about the unfairness of Aetherworks and Copy Cat.