Magic is big, but it is also small.

Grand Prix have thousands of players—hundreds of thousands of people worldwide enjoy the game, and millions of packs get cracked, but I am one person who still plays Magic with a handful of friends.

When I say that Magic is big, I mean that it is a global phenomenon. When I say it is small I mean that it is personal and played locally. The big and small attributes of the game are what make it both engaging and sustainable for so many individuals.

Magic content tends to focus on the big aspects of Magic: the global metagame, community issues, and discussion of large events and results worldwide. Today, I’m going to focus small.

Welcome to the secret shame of Tribal Assassins!

Years and years ago, Ann Arbor, Michigan had a pretty slamming local tournament scene that featured some really interesting players who were all friends and battled all of the random weekly events together: Ari Lax, Kyle Boggemes, Stuart Parnes, Alex John, Matt McCullah, Kyle Dembinski, Curtis Droge, Max Mcvety, Tyler Hill, Daniel Overbeek, and the Kai “the sleeping master” Ruan. Too many name drops, but I didn’t want to leave anybody out, although I’m sure I probably did.

It was a great group of players and there was a lot of fun to be had. One of the aspects that made this group so fun to be a part of was that there was a high level of gamesmanship among the members. Everyone loved to game and was creative about finding new and exciting ways to keep the grind fresh and exciting week after week.

Something as simple as going across the street to get milkshakes in between rounds quickly escalated into a complex credit card game where the “loser / buyer” gained the ability to mix and match the most disgusting combination of flavors (mint and P.B. & J, mmm….) and give it to a “winner” of his choice. There were at least two dozen random “games” with strange rules that were played day in and day out.

One of the most interesting games to come out of this group was Tribal Assassins.

Here’s how it worked. If you started an event with an 0-2 record you had to play round 3. If you lost round 3, you had to play a “Tribal Assassins” themed deck at the next weekly event!

The definition of a “Tribal Assassins” deck was open to interpretation. The more flavorful, the better. 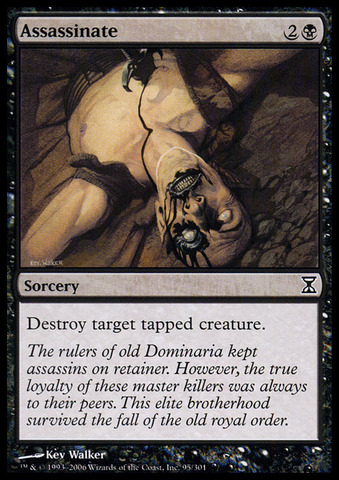 It’s not about being rigid and strict. Assassinate is more flavorful than Murderous Cut—basically, if you can argue how the card fits into the Assassin’s Guild, it’s good to go.

To be honest, I can’t even remember how this tradition got started or why it was Tribal Assassins. It could have been anything (even a boat… you know how badly we’ve always wanted a boat!), but it ended up Assassins. I asked around but nobody could specifically remember how or why it got started.

The reason I brought this up in the first place is because my friend Stuart Parnes relayed to me that a player was actually playing a Tribal Assassins deck at Monday Night Modern in Ann Arbor last week. The player’s name was Michael Bourgoin and his list actually looks pretty good.

As far as decks that exist for the purpose of penitence for an 0-3 go, this deck is gasoline!

When I mentioned that I was working on a Tribal Assassin’s article, I also got some interesting messages from other players. Invitational Champion Max Mcvety sent me his Standard Tribal Assassin’s list that he worked on with Tyler Hill.

I was super pleased that Max was able to send me over a list from 2015 that he had saved. He even mentioned, “The innovation of the main deck Self-Inflicted Wound was key…” which I assume means that Max may have had the misfortune of a few bad PTQs to have refined his Tribal Assassins so much…

I cannot overstate how important traditions are to any activity that hopes to endure the passage of time. I think it is amazing that some random goofy thing that people used to do years ago has been adopted by a new crop of players and continues to live on to this day. It’s pretty cool.

So in the future, if you sit down to play at your LGS and your opponent is jamming Assassins, be nice to that person because they 0-3’d their last event! Just don’t lose to them… because if somebody beats you with Tribal Assassins they pretty much own the bragging rights to you for a while.

I’ve been fortunate to have always been part of fantastic groups of players who are fun and interesting. I’ve been a part of a lot of cool traditions over the years. What kind of cool traditions and legacies are you and your friends passing on to the newer players at your LGS? I’d love to hear about them in the comments!