“Vial Smasher the Fierce is banned!”

Such wonderful news I woke up to today! While you may be reading this a few days in the future, I couldn’t wait to get writing about the new world 1v1 Commander is about to enter.

The July 5th MTGO Commander banned update has been a doozy—we saw 5 cards banned this time, including a general who has had nothing short of a chokehold on the format since its inception. Let’s start with that general, Vial Smasher the Fierce.

I’ve spoken at length about this vicious general in my last few articles, but finally, the reign of Vial Smasher Fierce has come to an end. You’ve had the crown long enough, girl—time to pass it to someone else.

Why It Was Banned

“Decks headlined by Vial Smasher have been an increasingly dominant part of the environment. While usually paired with Kraum, Ludevic’s Opus, it’s clear that Vial Smasher is the dominant factor in the success of these decks, providing too much damage for too low a cost. She is a clear rival to many of the Commanders already banned given her ability to win games essentially on her own backed up with a constant stream of disruption.”

I wholeheartedly agree with WOTC’s views here. Vial Smasher has been banned in Duel Commander for some time now and it’s easy to see why. Her triggered ability is unfair in the 1v1 format, as it was designed to distribute damage with equal chance to all opponents, not just the one victim. Removing the random clause simply pushed the adorable Tarkir Goblin too far over the top.

Her most notorious partner in crime, Kraum, was undoubtedly her most efficient ally, but it didn’t really matter who you partnered her with. Vial/Thrasios, Vial/Sidar, Vial/Reyhan. No matter how you sliced or diced it, Vial Smasher was the star of the show and she brought way too much pain to the stage. I do not have the data available that Wizards has, but I wouldn’t be surprised if Vial Smasher the Fierce was responsible for 1/3 or more of the 5-0 MTGO League results. 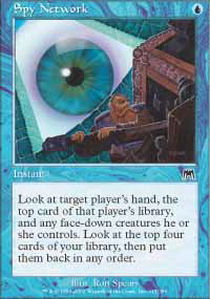 In a world without Vial Smasher, I wouldn’t be surprised to see another wombo-combo partner general take the reigns. Will it be able to apply the pressure and close games out cheesily like Vial Smasher? No, but that isn’t entirely necessary. I expect to see the powerful Thrasios/Tymna partner general pop up a bit more. Thrasios, Triton Hero is the most efficient partner general, costing just 2 mana and having excellent late-game utility. Tymna comes into play the turn after and on a board where Thrasios can peck in for 1 damage on turn 3, you can start drawing extra cards right then and there.

What is to become of Kraum, Ludevic’s Opus? Sadly for the Zombie monstrosity, I do think his usefulness has been slashed a bit without Vial Smasher present. Kraum was only useful for brainless assaults on an opposing life total that was already under pressure from his partner. Without access to such a broken damage dealer, his Stormbreath Dragon impersonation is largely irrelevant. I suppose if you ever have issues with planeswalkers, this general is strong to partner with someone. Additionally, blue and red are excellent colors to add to someone like Reyhan or Sidar Kondo.

Partner generals aside, I believe we will see more of our favorite blue friend, Baral, Chief of Compliance. Baral decks tended to have a tough time with the Vial/Kraum matchup, as that deck applied fast pressure and multiple threats to counter each turn. Without the huge pressure on his life total, Baral can happily sit behind his wall of counterspells until he can be grossly disfigured and transmuted into a huge, flying, tentacle monster. Vial/Kraum just won games more easily than Baral decks, so why wouldn’t you just play them? Without that option, and combined with the cheapness to build a tier 1 Baral deck, I can see this becoming the new (old?) biggest threat in the format.

Tasigur and Leovold decks would also jump in popularity… if not for another huge banning that took place. 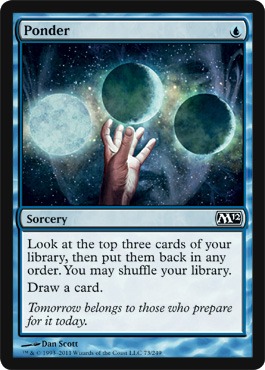 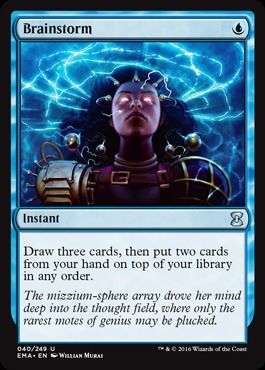 Ah, the three musketeers of cantrips: Ponder, Preordain, and Brainstorm have been central to competitive EDH as long as it’s been around. Do I love playing with these cards? Absolutely. Am I happy to see them go? You betcha!

Why They Were Banned

“There have been a variety of blue Commanders that have shown success with the same core game plan, and in aggregate they mean that the variety of game play in the metagame is lower than we’d like. In our May 24th update we took an incremental step towards weakening these decks, and this is a similar step. Further constricting the ability of these decks to power through their library should lower their consistency somewhat.”

I am all in favor of blue decks being the top dogs of the format. But I would love to see a little competition. What pushes these spells over the top? Well to put it in perspective, 98/99 cards are a lot of cards for a Constructed deck. Ideally, one of the fun aspects of EDH, even competitively, is the variation of gameplay. With so many cards, you are bound to have varying lines of play and board states to analyze from game to game. Sure, generals and tutors can both lead to repetitive gameplay, but every color has access to generals and tutors. Not every color has access to cheap, powerful cantrips that let you churn through the library to find the most powerful spells.

It’s perfectly fine for certain colors to have access to spells and effects others don’t, but blue already has access to counterspells exclusively, as well as the best card drawing and combo cards. Having the only premium cantrips just further extended their lead. According to MTGGoldfish.com, Ponder and Preordain were the two most played spells in the entire format. For the sake of giving other colors a chance by slightly nerfing blue card selection, I am in favor of these bans 100%. 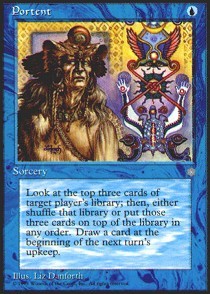 Serum Visions is only slightly weaker a spell than Preordain in 1v1 Commander. While the Visions is strictly worse when digging for an exact spell, it is actually often better than Preordain in the development part of the game. How so? Serum Visions allows you to draw a card and then evaluate afterwards. Let’s say you aren’t entirely sure how to balance your land versus spells ratio in the early stages of the game (this is common for many control decks). Drawing the card first further allows you to gauge from that information and then set up the next two draws depending on it. Preordain sometimes doesn’t paint as accurate a picture as you only get to see the two cards before making the crucial decision with the scry. 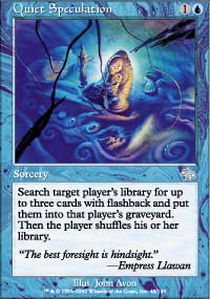 Portent is just Ponder-lite and should be an easy replacement. I could even see cards like Peek, Shadow of Doubt, and Thought Scour entering the fold more. Perhaps there will be room for Quiet Speculation along with its targets of Deep Analysis, Flash of Insight, and Think Twice in heavy-blue decks.

With less emphasis on cheap digging through the library, you may see fewer  combo decks. The rise of Baral and more pure control decks may be one contributing factor here, but the loss of these cantrips can’t possibly help blue combo decks. Additionally, Tasigur the Golden Fang enjoyed delving away these cheap cantrips, and losing all 3 of them at once may not sit well for our favorite banana man. Leovold may suffer slightly if decks don’t look to replace the cantrips with other cantrips. If bad tutors like Grim Tutor or Imperial Seal, or slow-trips (cantrips with “next upkeep” delayed draw triggers) like Mishra’s Bauble, Urza’s Bauble, Portent, and Clairvoyance take their place, Leovold loses some of his punch as well. 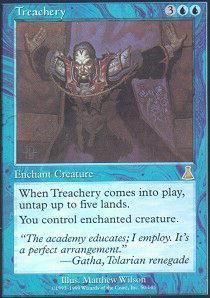 Last, and probably least, you have Treachery. This overpowered Urza’s Destiny Control Magic effect is one of the most backbreaking spells you can resolve in formats like EDH and Cube.

Why It Was Banned

“Aside from strong card selection, Treachery is one of the few cards played in nearly every blue deck, largely from its sheer power. When drawn, it’s a card that provides a tempo swing that’s often impossible to recover from, and when looking for ways to weaken this style of deck it’s a clear enough outlier in strength to warrant a ban.”

Meh. I can understand this banning, but Treachery wasn’t necessarily a card I thought was out there ruining games of Commander. Let’s face it—Treachery isn’t fun at all. When someone takes your general with it, it doesn’t even go back to your commander zone, so you are stuck in quite a conundrum. What’s interesting is that each color can actually answer a Treachery. Green and white can destroy the enchantment itself, black and red can kill the creature (and in turn, put it back in your command zone), and blue can bounce the creature back to you. What’s not interesting is the fact that Treachery allows the caster to untap 5 lands, allowing them to counter any response to it from the opponent. Unfair card is really unfair and after pondering it a bit, I can totally get behind removing this. Is Magic healthier with or without Treachery? Without is my vote. 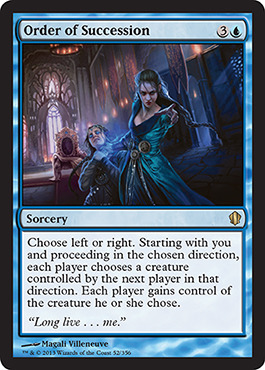 Unlike the banning of Vial Smasher and the cantrips, Treachery wasn’t necessarily making huge waves regarding the playability of certain archetypes and strategies. Other options could include Order of Succession, for decks with few creatures, Control Magic for decks with more creatures, or Gilded Drake for decks that have no issue dealing with the 3/3 flyer.

The removal of these 5 cards weren’t the only changes to the ban list, however. 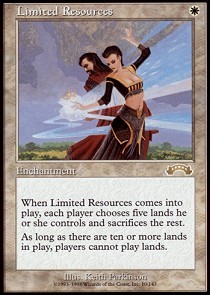 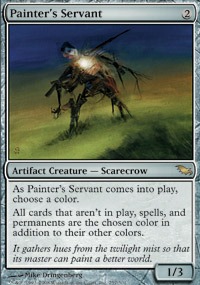 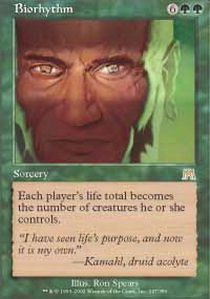 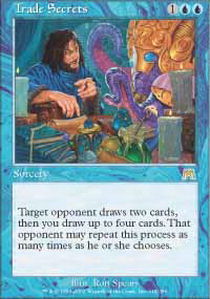 These 4 cards were removed from the 1v1 Commander ban list as well. The Hour of Devastation update finalized the separation of the 2 formats, Casual Multiplayer and Competitive 1v1, on Magic Online. These spells are primarily overpowered/unfun in multiplayer EDH and because of this division, they no longer pose a threat to this format.

I don’t expect Limited Resources, Biorhythm, or Trade Secrets to make any splashes in the format whatsoever. Painter’s Servant is a little more interesting because it combos well with Grindstone to mill an opponent out. 2-card combos, especially ones with little utility outside of the combo turn, have typically been unpopular in competitive EDH. While some may groan and complain about Splinter Twin or Painter’s Servant combo in casual EDH, this format is a different beast entirely. Still, artifacts are quite easy to tutor and abuse, so I wouldn’t be surprised to see Painter’s Servant pop up from time to time. Iona, eat your heart out!

So there you have it, my best predictions for the changes we will see in upcoming weeks. The next banned update isn’t until the end of August and I’m positive we will see some interesting results in the meantime. What were your thoughts on the banned announcement? What do you think will happen going forward? Let me know in the comments.

Only time will tell exactly what lies ahead, but you can rest assured I will be here to cover it all! Thanks for reading, and until next time, may your vials remain unsmashed.