Wizards of the Coast recently decided to remove foil promo cards as FNM prizes, and replaced them with foil double-sided tokens. I nabbed one of these at FNM last week (suck on that, Worlds competitors!) and created a little video about my experience over on YouTube.

I wanted to be excited about these and their potential, but after coming across them in the wild, I was anything but. It featured the exact same art as the regular tokens you can find in every pack of Ixalan, which fell flat when compared to the previous month’s alternate art Fatal Push. With an initiative change of this size, I have to assume that Wizards had plenty of time to prepare for this and make it feel extra special, and unfortunately, it didn’t. 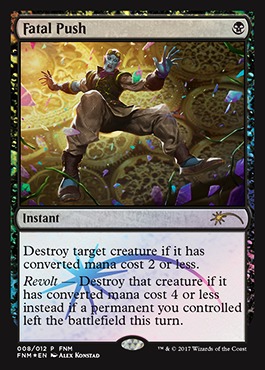 One of the common arguments in support of this is that I’m likely not the target audience, and that Wizards would try to steer me, a more competitive player, toward Premier-level events. If that’s the case, then that’s likely true for many of you as well. Judging from the comments, many of you are as competitive or more so than I am.

Despite having Top 8s in premier-level events, I’ve been a fairly regular FNM player for something like 10 years, if not longer. As an adult with hobbies aside from Magic, sometimes I prefer to spend a few hours on a Friday night playing Magic than commit an entire Saturday (and sometimes Sunday, depending on the event) to the game.

While I think that receiving playable cards as promos like Aether Hub, Incendiary Flow, and Unlicensed Disintegration is great, I also think that giving out tokens as promos could be just as successful. They just have to be implemented correctly. And after receiving one myself, I don’t think they are right now. To that end, I’d like to offer some alternatives as to what can be used going forward, and if Wizards ever wants to use some of these ideas, I, Frank Lepore, being of sound mind and body, grant full permission.

Pro Player Tokens: This past weekend we saw 24 of the world’s best battle it out at the World Championship. While Wizards has given out Pro Player cards in the past, they weren’t exactly tokens. They had no power and toughness, they had no creature type, and they had no abilities that would be represented in the latest sets. This has, however, been done by most of the major Magic sites. They’ve made their authors into tokens, complete with accompanying stats and abilities. What better Treasure token could you think of than a foil William Jensen in pirate garb, digging up the World Championship trophy on a beach?

These would be one-of-a-kind and Wizards could pick an event like Worlds to determine who gets tokens. There are 24 players, so distribute 2 new tokens per month throughout the year based on the sets they’re released in. With a new set every 3 months, that’s 6 tokens per Standard set.

Jace, Cunning Castaway Tokens: Whether you think Jace is a playable planeswalker or not, there’s no arguing that his new ability is unique and even revolutionary when it comes to planeswalkers. Heck, before the Ixalan rules change, it wasn’t even possible! I found it weird enough that Jace copy tokens weren’t found in packs, but I understood it—after all, it’s going to have to look very similar to Jace and that could get confusing. But I can’t think of a more perfect opportunity to make a Jace copy token than for these FNM promos. Considering that Jace has the potential to get out of hand, these could be collected like Relentless Rats by some, and traded by those who aren’t interesting in using the planeswalker.

Full Art Tokens: If there’s one thing I regularly, and I mean regularly, hear people lament, it’s the discontinuation of full art Player Rewards cards. These were full art foil versions of your favorite cards, like Cryptic Command and Wrath of God, that were mailed to your house in denominations based on how much Magic you played during the given “season.”

Wizards already knows that players love full art cards. This is why the lands are one of the main draws in Un- sets. This is why some of our promos are full art. This is why Zendikar had full art lands. I wouldn’t even mind if the FNM token art was the same, so long as they were full art. The point is that players want something unique and cool that they can’t get somewhere else, yet the current tokens feel like two completely regular tokens glued together.

Alternate Art Tokens: This one is simple and what FNM promos were already doing. This is, again, an instance where Wizards knows this has appeal. This one doesn’t really require much explaining, but I also think it’s one of the most basic (yet acceptable) alternatives.

Double-Sided “Rare” Tokens: There are certain tokens that are just rarer than others, due to where they were available, their distribution, etc. Marit Lage is the first one that comes to mind and one I keep repeating on social media. This would be an awesome token to get as an FNM promo. The biggest problem I can imagine is that newer players that we’re encouraging with these tokens don’t know who Marit Lage is or what the token is for. I present two counterpoints to this, however: 1) That makes it a great talking point where someone can explain an older, iconic card like Dark Depths to the newer player. After all, what player wouldn’t be interested in a 20/20 flying, indestructible ice monster? If I got this, I would immediately want to know where it came from. And 2) those players will still have whatever foil token is on the other side to use in Standard, presuming these are still double-sided.

Missing Tokens for Older Cards: This is another easy one. I have my own Cube built and I have all the tokens that the cards in the Cube can make sleeved up and ready to go. Unfortunately, some cards (I’m looking at you, Ophiomancer) don’t actually have their own tokens. So I end up using a B/G enchantment Snake from Theros instead, and it’s quite unfulfilling. There are plenty of older Magic cards that made tokens before actual token cards existed. This is a great place to make one side of these and one side of a Standard token.

These are just a handful of options and hopefully this has given you guys some insight into how many potential ideas there are out there for FNM tokens. The overarching theme here is to give us something we can’t get anywhere else. With the current offering, I only feel like they kind of, sort of did that, but not really.

The only reservation to any of these I can think of is that they don’t want to make the tokens too chase-y and risk having the competitive sharks come out for FNM. I believe this is what they wanted to avoid in the first place, making FNM a more welcoming environment for newer players. If that’s the case, they’re basically just admitting that their goal is to make the tokens unexciting. While I sincerely hope that isn’t the case, having an exact Ixalan token, only in foil, with another exact Ixalan token on the back as their first offering didn’t instill me with confidence. No matter what, I hope they’ll hear the feedback, and take it into consideration.