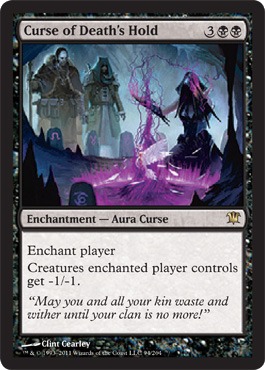 I remember seeing Curse in sideboards years ago, but somewhere along the line I completely forgot about it. Between destroying Lingering Souls decks, answering Affinity’s manlands, and hosing random strategies like Martyr Proc or Infect, the card has a lot of utility.

When a format has efficient answers (Path to Exile, Lightning Bolt), it seems crazy to consider a quasi-situational 5-drop that doesn’t necessarily kill everything. Still, it’s a combination sweeper and soft lock, and that’s a unique enough effect to consider.

Florian Koch Top 8’d GP Vancouver with a copy in his sideboard:

Just from looking at his numbers, you can tell that Koch plays a lot of Modern. A few months ago, Liliana as a 2-of would be inconceivable, but these days it seems like every deck in the format has had to adapt. Rather than get stuck with 3-4 copies in the Lingering Souls mirror, he runs the third in the sideboard.

Doran acts as Tarmogoyf #5, and there’s a decent chance to drop it turn two off of Noble Hierarch. Note that it randomly hoses cards like Cranial Plating and Rancor.

Speaking of Noble Hierarch, the extra mana is one reason he can get away with the more expensive hate cards like Fracturing Gust and the Curse of Death’s Hold.

The more I learn the types of decks that want Outpost Siege, the more I’m impressed by it. I don’t expect it to become a Modern staple or anything like that, but it could overperform in some archetypes.

In Tarmogoyf-type decks, Chandra, Pyromaster is better because it can force beats through and the ping can help grind away smaller creatures.

In decks with a lot of burn, the Outpost Siege makes more sense because it’s on the top of the curve (whatever you hit, you cast). In these decks, you have fewer blockers to protect a planeswalker, and fewer attackers to force through with Chandra’s ping.

It should fit in grindy Lingering Souls decks, taking advantage of both the Khans and Dragons aspects of the card.

I like how Outpost Siege functions as both a pain-free Phyrexian Arena or some kind of crazy Goblin Bombardment for Lingering Souls. The idea could be pushed even further in a more typical tokens shell with Spectral Procession, or maybe a base-red deck with cards like Mogg War Marshal, Goblin Rabblemaster, or Hordeling Outburst.

Thundermaw Hellkite is well-positioned at the moment, as there are a ton of Lingering Souls flying around.

Crackling Doom is a surprisingly good answer to a lot of threats in the format, particularly Boggles, and I’ve seen UWR decks splashing for it.

Max Walsh had a copy of Outpost Siege in the sideboard of his 22nd-place GP Vancouver list:

There’s a lot to like about this list. Murderous Cut solves some of the problems with UR Delver, as universal instant-speed removal is so good against Twin and Tarmogoyf decks.

Combining Thought Scour with any of the eight fetchlands, a Gitaxian Probe, or a second Thought Scour enables a turn-two Tasigur.

The Deprives are a rare choice. It’s not usually a turn-two play, though even there it’s fine if you’re missing your third land drop, and I like the synergy with Darkslick Shores. Deprive makes the deck way better against cards like Siege Rhino and Scapeshift, and Snapcasting it back gives you something to do with your land drops in the late game. By running Deprive, we don’t have to play situational counters in the main deck like Spell Pierce or Spell Snare, and we don’t have to sideboard a pile of Dispels, Flashfreezes, or Negates.

My main problem with the deck is that it’s still a little weak to Junk. We have some situational answers to specific cards, like Electrolyze against Lingering Souls or Young Pyromancer into cantrips against Liliana, but in general the deck is weak to those cards.

The sideboard looks scattered at first glance, but a slew of high-powered 1-ofs is ideal for a tempo deck because the critical mass of cantrips will help you see them more often.

I look forward to testing the Outpost Siege. It has me scratching my head, especially since Phyrexian Arena is in this deck’s colors. I guess it might get set on Dragons when you have an active Pyromancer, but if you have an active Pyromancer you’re probably already winning. On first glance, it looks worse than Blood Moon, as that card buys a lot of free wins against the decks worst matchups. Still, post-board Junk opponents are more likely to fetch out basics to play around a potential Moon, and a split between the two might make for a nice hedge.

My main concern with the Siege is hitting cards that are best cast on the opponent’s turn. Hitting a Deprive sounds like the worst, and I’d hate to Snapcast as a sorcery if it’s not ideal.

The Dragon’s Claws are depressing. After all, we have three colors to dip into for burn hate and this is the best we can do?

Overall, this deck should beat up on combo and be disadvantaged against Junk and Burn.