Recently, there have been several articles on how to identify the deck your opponent is playing based on their first land drop. While this is definitely useful information, I think we can go deeper—we can often identify a big portion of the contents of our opponent’s hands and sometimes even their game plan by the order they play their lands. In this article, I’m going to give you five scenarios where you should be able to draw valuable information from your opponent’s land drops. 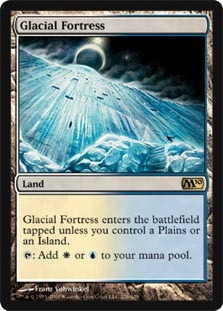 Imagine that you’re playing against Jeskai. Your opponent plays a turn-1 tapped Glacial Fortress. What do you know from their hand? The best way to figure it out is to put yourself in their position and ask what you would do if you had a certain card. If you’d do something different, then likely so would they, which means that they don’t have said card. With this opening, you can reason that:

In the end, there aren’t many lands they can even have in hand. If they’re playing the Jeskai version I played at the PT, for example, the only lands they can possibly have are Island, Plains, or Sulfur Falls. When an opponent plays a turn-1 Glacial Fortress, you know that they’re probably land-light. I’d guess they will usually have one more land in hand—they’ll rarely have two more, and almost certainly not three more.

Almost this exact situation came up in my match at the 2010 World Championship Quarterfinals against Jonathan Randle. He led with Glacial Fortress into Plains and Leonin Arbiter. On turn 3, he tapped his Glacial Fortress to play Preordain, which I Mana Leaked. He then passed the turn without playing a land, and I won the match in big part because of this play. I thought that because he played Glacial Fortress first, he was likely to be land-light, or at least blue-land-light, and he was. Had he started with Colonnade into Seachrome Coast, I would probably not have Mana Leaked the Preordain.

Once you believe that you have knowledge about their hand based on their first land drops, you can then take it a bit further. Imagine, for example, you’re playing against Jeskai. Your opponent goes turn-1 Glacial Fortress, turn-2 Sulfur Falls, pass. What do you know about their hand?

First, you know they’re unlikely to have a Colonnade, a Ravnica dual land, or a fetchland in this scenario. But you also know they kept their hand, and on turn 2, they didn’t play a Serum Visions. How many 1-landers is Jeskai keeping when the land enters the battlefield tapped and they don’t have a cantrip? Very few. If it’s me, probably zero. So either your opponent has Opt in hand (and it’s arguable they should have main phased it on turn 2 looking for a better land to play), or they started with Sulfur Falls in their opening hand already. Either that, or they have both Opt and Spell Snare.

Let’s assume that I pass turn 2 and my opponent doesn’t play Opt, which to me solidifies the conclusion that they had both lands in their opening hand. At this point, I know that they chose to play Glacial Fortress over Sulfur Falls turn 1. Given that, it’s much more likely for them to have Path to Exile in hand than it is for them to have Lightning Bolt. If they have both, they’ll want to cast Bolt turn 2, not Path, so the fact that they played the land that cannot cast Bolt means that they probably don’t have it. At the same time, they kept a clunky hand that is hand-light, so they have to have some form of early interaction.

So, at this point, you can deduce from their hand that:

That’s a lot of information from just their first two land drops!

Now, what happens if they play an Opt at the end of your second turn? Then the situation changes. I’m no longer that confident they had the two lands to begin with—they could have just kept a 1-lander with Opt. It’s a bit sketchy when the land enters the battlefield tapped, so there’s still a decent chance they had both in their opener, but it’s possible, so it’s still more likely that they have Path than Bolt, but not by that much. Instead, the chance that they have Spell Snare is increased, because they didn’t play Opt on turn 2. I know they are land-light, so they’re probably just looking for land, and there are some they would rather play on turn 2 than Sulfur Falls (such as a dual or fetch). Given that they didn’t mainphase Opt, they probably wanted to leave their mana up that turn, which makes it more likely they have Spell Snare, especially if by this point they already know what you’re playing (so they know if they want, say, a Lightning Bolt from the Opt or not).

It’s important to notice those things, but it’s also important to remember them. Let’s go back to the Glacial Fortress-into-Sulfur Falls scenario without Opt. Imagine that your opponent played a turn-3 Scalding Tarn and a turn-4 Flooded Strand. In this spot, they’re almost 0% to have Lightning Bolt in hand. You knew they didn’t have Bolt turn 2, and you also know that they very likely drew fetchlands on turns 3 and 4, because they would have played those if they’d had them any sooner. So because of how turns 1 and 2 went, you now have valuable information on turn 4! 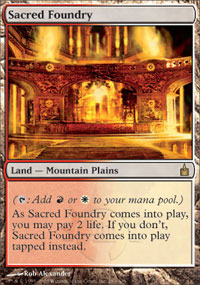 Now imagine that you’re playing against Burn. Your opponent leads with Scalding Tarn for Sacred Foundry and Goblin Guide. What do you know about their hand?

The most likely possibility after this start is that they have no other lands in their hand at all! I’d expect their hand to be all spells, many of which cost 1 mana (they did keep a 1-lander, after all).

Now imagine you’re playing against Burn, and their turn 1 is Mountain, Goblin Guide. Their turn 2 is fetch for Mountain, play Eidolon.

In this case, you know that they very likely have another land in hand, and that land produces white mana. Otherwise, they would almost be forced to get Sacred Foundry here instead of Mountain.

Now imagine that you’re playing against Death’s Shadow and your opponent’s turn 1 is cycle Street Wraith, Polluted Delta, get Watery Grave, Inquisition of Kozilek. What does that tell you about their hand?

To me, this sequencing means that they have a very land-light hand. The fact that they specifically cycled before fetching shows they want to draw land. If they didn’t want to draw land, they’d fetch before cycling to thin their deck. I’d guess that, with this opening sequence, they’re likely to have zero other lands in their opening hand. If I’m playing this match and my opponent does this, then I’m much more likely to counter an Opt or a Serum Visions next turn, for example. If it turns out they did have more lands in hand originally, then I’d expect their hand to have multiple copies of Snapcaster Mage, Liliana, Kolaghan’s Command and other 3-drops.

For the next point, let’s try a different scenario. You start the game, and your opponent plays turn-1 Urza’s Power Plant. On turn 2 they play Urza’s Mine and pass. You play Fulminator Mage. You don’t want to risk your opponent having Tron, so you want to destroy one of their lands. Which one?

Most of the time, when you have multiple equivalent lands in hand, you don’t think much about which one you’re going to play—you just play one at random. In a hand that contains 2 Urza’s Power Plants and 1 Urza’s Mine, if you’re choosing randomly, you’re twice as likely to play Power Plant first.

We also tend to avoid exposing the ones we have only 1 copy of because we don’t want them to be destroyed before we can use them. For example, in a hand of 2x Urza’s Mine, 2x Urza’s Tower, and 1x Urza’s Power Plant, you’ll almost always lead with Mine then Tower or Tower then Mine— you’ll never lead with Power Plant because if that gets destroyed, you don’t have a backup. If your hand is 2x Mine, 1x Power Plant, 1x Tower, then you lead with Mine, because you could draw a second copy of a Tron land, which means you play that turn 2, and then you’re protected from Field of Ruin, Ghost Quarter, and whatnot.

Of course this is not an exact science—some people will think about something else, and some will want to trick you and will play their 1-of first on purpose, but I believe that someone that starts with 2 Urza’s Power Plants and 1 Urza’s Mine in hand is more likely to lead with Power Plant than Mine, which means I think they’re more likely to have duplicates of whichever land they play first. This means that you should pay attention to which land they played on turn 1, and use that information to help you guide your plays later on. 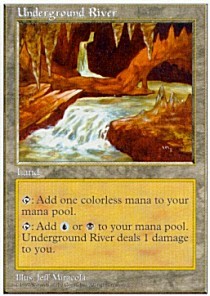 One last way of using land drops to gather information is by looking at the individual pictures or versions of the cards. I remember I was once playing at the World Championship against Masashi Oiso in the Faeries mirror. Oiso Thoughtseized me and wrote down my hand, so I made a note of what cards I had that he knew about. One of them was an Underground River.

At some point during the game, I drew a second Underground River. I then shuffled my hand and looked back at it, only to see two completely different Underground Rivers staring at me—one white bordered, and one black bordered. Which one had Oiso seen? I had no idea. At the same time, I knew he’d know. Left without a choice, I just played one at random and hoped it was the one he already knew about.

The lesson here is twofold. First, try to play the same copy of the card if you can, but if you can’t or don’t want to, then pay attention when your opponent looks at your hand. Second, pay attention to what your opponent is showing you! Sometimes you see a Forest in their hand, and then they play a Forest with a completely different picture, giving you free information. They won’t always do that, but you want to make sure you catch it when they do.