Last week the world got to experience the first wave of Regional PTQs worldwide. In a completely unprompted and somewhat surprising act of goodwill, Wizards decided to make every single deck list from the Top 8 of those events available to us.

Amid a sea of Esper Dragons, Mono-Red, Abzan Aggro and Abzan Control, there are a couple of very interesting decks that I think are worth talking about. Here they are:

Ian’s deck is the type of deck that I love—you pass with a bunch of open mana and they have no clue what’s going on. Depending on what they do, you react accordingly, and the result is usually good for you. This model has historically been good vs. control decks and bad versus aggressive decks, because it struggles to win if it falls behind.

Ian’s version has a lot of interesting things going for it, such as Raptors + almost infinite morphs, Boon Satyr + Den Protectors (makes it impossible to block) and Collected Company + Silumgar Sorcerer, which serves as a counterspell and an added threat at the same time. Collected Company will not hit many great creatures like Anafenza in this deck, but it will very rarely not hit two creatures.

There are some suspicious cards in Ian’s list, such as Chord of Calling. Chord is a good card to play the “pass the turn with open mana and then react” game, but in this deck, it’s always going to be an overcosted creature. There are no bullets other than Silumgar Sorcerer—everything else is only good if you morph or bestow it, and Chord doesn’t help with that. I’d like to see Chord go.

In place of the Chords, I’d probably include two Disdainful Strokes. They’re quite good vs. a huge percentage of the metagame, and they’re great cards to bring back with Den Protector. They also help with the pass-with-mana-untapped plan, of course.

I’d also try to up the Den Protector count to 4. It’s not a horrible turn-2 play, it has an added ability, and it’s great with Boon Satyr, which makes me think it’s better than the other 2-drops that the deck is playing. If I had to start testing this deck, this is the version I’d play:

Ideally you’d have some sort of spell that interacts with creatures, but blue and green aren’t well known for that—the best things I could find are Voyage’s End and Icy Blast, neither of which seem particularly great. Voyage’s End looks like it could actually be decent, though, since a lot of your own guys aren’t bad to bounce themselves.

Another option is to explore adding a third color. Having three colors gives you powerful spells to bring back with Den Protector and theoretically improves your sideboard, which is very one-dimensional right now. White could give you Valorous Stance, Dromoka’s Command, and perhaps Ojutai. Black gives you Ultimate Price and sideboard Thoughtseize, and red gives you an assortment of burn spells.

The Abzan Morph deck has been popping up online for awhile, and now has some real tournament results to back it up.

This is a very grindy deck—it plays a bunch of 1-for-1 spells and then hopes to pull ahead with Den Protector shenanigans. The difference from Tom Martell’s PT Dragons of Tarkir deck is that Daisuke commits even more to the manifest plan, with both Mastery of the Unseen and Whisperwood Elemental in his deck, which gives him an even better late-game.

One card that I’m surprised to not see is Courser of Kruphix. Courser is a great card in this kind of deck, since it’s good against both aggro and control—something not many cards can say. It’s also particularly good with Mastery of the Unseen, since you have control of what you manifest and you can more easily both dig for lands and use the lands you’ve found. This deck also has Satyr Wayfinder and Abzan Charm, both of which kind of help with Courser too since they give you more shots to find a land on top of your deck. I’d add 4 Coursers to this deck, removing one Sorin and three other cards (likely a Thoughtseize, an Ultimate Price, and a Whisperwood Elemental).

This is also another deck that showed up online a while ago and is only now showing up at tournaments. I actually played against it at the PT and was reasonably impressed—but that might have been a function of my opponent, Stephen Speck, being a cheater and getting disqualified the very next round for stacking his opening hand.

Hand stacking aside (and if you are adamant about stacking your deck, I’d recommend one that goldfishes before turn 7), I think this kind of deck has potential. It plays a normal, grindy game of attrition with solid cards like Siege Rhino and Courser of Kruphix, and then eventually, when your graveyard becomes big enough, you get a 5WW: “win the game” spell, since it re-triggers all your Siege Rhinos. You don’t need it to win, but it will trump most of what they’re doing if the game is slightly even.

One card that I’m surprised Jesse didn’t run is Mogis’s Marauder. Mogis’s Marauder makes killing your opponent much easier, since it can give haste to a bunch of your guys. A graveyard of Gray Merchant + Rhino + Rhino will deal 10 damage, but a graveyard of Marauder + Rhino + Rhino will deal 16 (albeit at sorcery speed). You could actually forgo some amount of Gray Merchants, or all of them, if you go this route. Another option is playing a more enchantment-based deck with Grim Guardian—the problem with this approach is that Grim Guardian as a card is very bad and I’d never want to draw it.

Lukasz Wlodarczyk played a similar deck in his RPTQ, and his version is more in line with what I’d like to play if I played this deck:

I’m a fan of the Raptor package there, since this is a deck that self-mills a lot, and then you can cut a Rally or even two. It seems counter-intuitive to cut the card the deck is named for, but when you have Den Protector and Nyx-Weaver, you’re going to find one eventually. It exiles itself, but you should only need one to win the game, and if it’s countered or Thoughtseized you can still bring it back.

Another change I’m a fan of is Elvish Mystic instead of Sylvan Caryatid. It’s going to be worse against cheap removal, but you have a ton of 3-drops and not many 4-drops, so you want acceleration on turn one. Here’s what I’d play:

Taylor’s deck is basically Bant Midrange except he splashes for four Crackling Dooms and one Dragonlord Atarka. He has six red sources, plus four Wayfinders and four Caryatids.

I think that Crackling Doom is not worth the splash. It makes your mana base slightly worse (at the very least you’re running trilands instead of Temples), and you don’t care about the damage part of the card very much, so you’re basically running a glorified edict. The fact that you can kill a better creature is offset by the fact that some amount of the time you can’t cast your card, and I’d prefer just playing a black edict.

Flores’s deck is kind of like Esper Dragons, except with less Esper and more Dragons. He has a full 10 of them, and casts them through Temples, Haven, and Crucible. 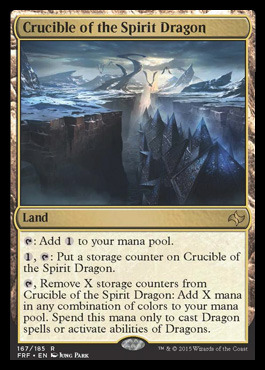 Crucible of the Spirit Dragon is the card that makes the deck—with it, you can play the waiting game, charge your lands, and eventually unleash a Dragonlord Dromoka + whatever you want turn. Dragonlord Dromoka is uncounterable and stops your opponent from playing further spells, so she can act as an expensive Silence if there is something you really want to resolve.

The question, of course, is whether it’s worth playing mono-blue spells to get all those sweet Dragons. My inclination is that it’s not. The cards you lose are just too powerful in a lot of matchups—Hero’s Downfall, Bile Blight, Crux of Fate, Drown in Sorrow, Thoughtseize, those can all be game-winning spells and Encase in Ice really doesn’t compare. You’ll have a big advantage game 1 in the “mirror,” since not only do you have charge lands and Silences but you also have more counterspells instead of removal, but I’m not sure this advantage remains once your opponent boards in 10 cards, and I’m not sure what else you’re advantaged against. Since you’re mono-blue, you don’t have access to Thoughtseize, Ashiok, and Tasigur, and I could see this combination making short work of you.

That’s what I got for today! See you soon,