Last week, in preparation for Grand Prix Bologna, I playtested a ton of Draft and Team Sealed, but after losing the last round to make Day 2, I decided to play all the Legacy side events on Sunday to prepare for Eternal Weekend and GP Birmingham.

After testing a bunch of combo decks, I am now firmly back on Deathrite Shaman plus Brainstorm, but I’m not 100% sure of the right shell: Delver of Secrets or Baleful Strix?

Last Sunday, I decided to try Sultai Delver, since I love how that deck can mutate post-sideboard by trimming Daze, Delvers, Force of Wills. It’s now a very versatile deck that fits my play style.

I went 2-1 and 3-0 in the two side events I played, winning one box and 20 boosters of Dominaria—underlining how great ChannelFireball’s side events are—I played versus every different archetype and lots of nice people. The deck served me well, and I tested a lot of different sideboard plans.

Against Miracles, I was keeping the Delver of Secrets + Daze package on the play and boarding it out on the draw. Dead Weight helped make Tarmogoyf bigger than Gurmag Angler and trigger revolt. Spell Pierce, while it’s worse against Chancellor of Annex, was great to counter Blood Moon and Chandra, Torch of Defiance.

The lack of Sylvan Library and Blue Elemental Blast was noticeable, though. Maybe I’ll find some space for them in my next event.

Despite playing a Delver strategy, my love for Liliana, the Last Hope continues, and I ran two copies. She has always overperformed against every kind of fair deck, from Death & Taxes to Miracles.

And since the real Liliana was wandering around the venue—escorted by Karn himself—I didn’t want to miss an opportunity to take a picture with my favorite cosplayer!

Original lists played four Tarmogoyf, as that was the mark of Sultai Delver, but I chose to trim one for Baleful Strix—I just can’t picture myself playing a fair blue-black deck without it. It raises the blue count for Force of Will and helps you against Delver of Secrets, since this deck doesn’t play that many removal spells for it. 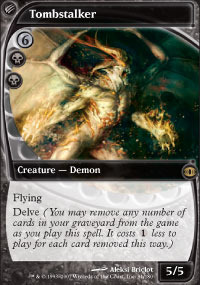 Tombstalker has always been a 2-of in this deck, but I trimmed one to make space for a Leovold, Emissary of Trest. While Tombstalker fits perfectly in the style of the deck, being basically unkillable by any Delver strategy or Sultai Deck, it’s nonblue and expensive, bad against white decks, and not that fast against combo. If you play Sultai colors, you have to play at least one Leovold, so here we are.

One of the critiques of Sultai Delver is that it doesn’t have enough spells to flip Delver of Secrets. In fact, I’m only playing 24. Though it isn’t that unusual to set up the top of your deck with Brainstorm, which might look like a bad play, but it grants you 3 damage. Sometimes you need to play Brainstorm plus fetchland in your main phase to get rid of extra lands or redundant copies of Hymn to Tourach and Force of Wills, but other times your hand will be already good, so shuffling just one card away is good enough to play it in upkeep.

The upside of playing only 24 spells, over the 27/28 that Grixis Delver plays, is that you get to play 20 lands!

The reason I don’t like Grixis Delver, and never find myself playing those strategies, is that it only plays 14 colored lands, and that’s so few considering that you need at least two to function properly. Lots of your games will be decided by mana screw, whereas this deck plays way better against those Wasteland, Rishadan Port strategies because of the extra lands.

Other than that, playing two extra lands provides a transformational sideboard plan that other Delver decks can’t afford to play.

Having access to Jace, the Mind Sculptor, Leovold, Emissary of Trest, Snapcaster Mage, Life from the Loam, and Hymn to Tourach turns you into a Sultai Control deck, leaving your opponent unsure of how to sideboard and approach the game. This is a strong weapon, especially if you can revert back to your original game plan for game 3.

If you run this kind of transformational sideboard, shuffle in 15 cards instead of just taking 9 or 10 and pulling them away—this is a strong signal that will help your opponent sideboard.

This weekend I’ll be in Paris, at Eternal weekend, battling Legacy and Vintage. I love Eternal formats, and I love that there are such big events supported by Wizards. I don’t think that they necessarily need to be GPs, and I love that this year there is even one in Asia, which I would love to attend!