Wow, 2016 has been a heck of a year. I left the site I had been with for six years. I Top 8’d the Pro Tour. And now we’re here. I’ve got to be honest: I’m not sure what else is even possible, and it’s only April! Truth be told, I might have some more big non-Magic news coming up in the next week or so, so be sure you’re following me on the appropriate social media channels as to not miss the announcement.

That being said, welcome everyone! For those that don’t know me, I’ve been creating Magic content for, as I mentioned, about six years now. I’m most well known for my videos (specifically things like Modern Monday), but I’ll be mixing it up a bit and producing a little more written content here as well. I’m also a streamer—I was a member of the Magic Online Community Cup in 2014, and I have a Grand Prix Top 8 to my name. I also host a podcast called Freshly Brewed with Ali Aintrazi. I guess you can say I know my way around some Magic and Magic content.

From here on out you’ll be able to find my work here on ChannelFireball multiple times per week.

Today I want to take a look at a deck I’ve put together for the new Eldrazi-Lite Modern format. It’s completely untested thus far, but I like the idea of it and it reminds me a lot of an old Tezzeret, Agent of Bolas deck I put together and loved back in Scars of Mirrodin Standard. Take a look:

The idea is pretty straightforward: be extremely greedy with your mana base in order to accommodate Glissa, the Traitor! (Of course I’m only half kidding there—ah, to live in a world where Glissa was double-black instead of double-green.) 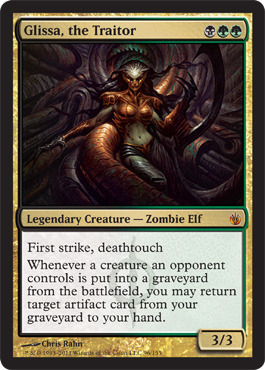 No, but seriously, a couple weeks back Zac Elsik was testing out a Modern BG Glissa, the Traitor list and it showed a good amount of promise. When she survives, Glissa is actually extremely good in this format. Deathtouch and first strike ensure that nothing really gets in her way, and being able to kill a creature and get back an artifact is pretty insane, especially with options like Wurmcoil Engine, Batterskull, Engineered Explosives, or a simple Executioner’s Capsule.

But Glissa is just one aspect of the deck. The main engine—as you could probably guess—is Thopter Foundry and Sword of the Meek (worth noting that Glissa is also able to get a destroyed combo piece back if need be). 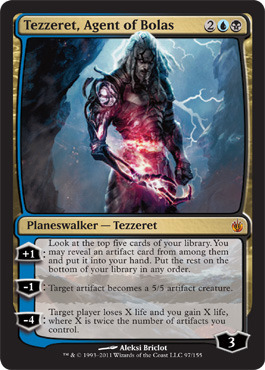 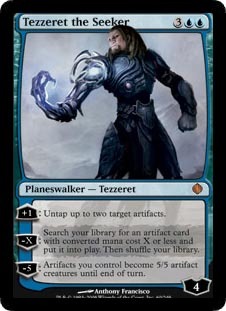 While it’s unfortunate that you can’t have both versions of Tezzeret in play at the same time, they’re both excellent in the deck and they both help you complete your combo or simply find a powerful artifact to solve your problems.

Four 2-mana signets seem pretty standard and they help ramp you to your 4- and 5-mana planeswalkers spells. I considered Mox Opal for a brief time, but you simply don’t run enough artifacts, especially considering the lack of Darksteel Citadel. 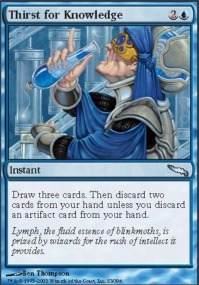 Thirst for Knowledge is one of the best draw spells you could ask for, allowing you to discard redundant combo pieces or expensive creatures, only to get them back later with Glissa, the Traitor. 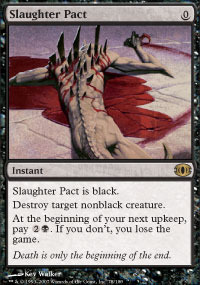 Meanwhile Abrupt Decay is one of the best removal spells available, allowing you to dismantle opposing Thopter Foundry combos, which I presume will be plentiful. One card that I’m heavily considering is Slaughter Pact. I do like the ability to kill a creature for free in response to a removal spell on Glissa, allowing you to get some value out of her. This is what’s known in the biz as a 2-for-1.

I’m pretty sure the best part about Sword of the Meek being unbanned in Modern is that it opens the door to numerous decks that contain the two-card combo. I’ve already heard rumblings of players combining it with Ancestral Vision in a control shell, combining it with Time Sieve for a dedicated artifact combo deck, simply playing UB by itself—along with the Sultai list I’ve been eager to try, you can see how many options are available by the unbanning of a single card.

It’s an incredibly exciting time to be a Constructed Magic player, albeit a rough time to be a video content creator. The fact that both Shadows over Innistrad is entering Standard and three huge changes are taking place in Modern means there should be no shortage of amazing ideas in the coming weeks. I guess it’s an amazing time to be a Limited player as well, what with a brand new Limited format to dive into. Thankfully Magic has Christmas over four times a year, and I for one simply can’t wait for these changes to happen on Magic Online so I can start making current videos again.

While we’ll still be waiting another week for Shadows over Innistrad, the Modern Banned and Restricted changes get updated on Magic Online this coming Wednesday (April 13th). Be sure to head over to my Twitch stream to check out Sultai Sword in action. Heck, even if it ends up being a flop, we’ll learn, adapt, and move on.

Thanks for reading, and I’ll see you guys again next week!