Throughout my time playing Magic, I’ve met a lot of great people, and found myself in a lot of funny situations. One of my favorite things to do when talking about Magic is to tell stories. This week, I decided to write an article to bring you a few of them. Here are the stories I find myself most going back to most whenever I’m trying to get a laugh:

At a Pro Tour in late 1998 or early 1999, we had organized a team draft. I don’t remember the exact teams, other than that both Jon Finkel and I were participants. This was at a time when Jon was considered to be the best player in the world, but also wasn’t nearly as self-confident as he is now. We found an empty table and started the draft. As seems to always happen, halfway into pack one, a judge walked over and informed us that they’d be needing the table to run a side event.

Being a smart ass, and attempting to needle Jon, I said to the judge, “Excuse me, but that’s Jon Finkel.” and pointed to Jon. Jon shook his head at me, embarrassed. At the same time, the judge took a step back and said, “Oh, I’m sorry,” and left. I had succeeded in embarrassing Jon, and as an added bonus we never had to move and were able to finish the draft.

At the 1999 World Championships in Tokyo, Japan, Matt Linde made Top 8 with a mono-green stompy deck designed by himself and Kyle Rose. Both Matt and Kyle aren’t too well known in modern Magic circles, but both had a great deal of Magic success. Kyle was a national champion, a Pro Tour champion, and has four total Pro Tour Top 8 appearances. Matt was one of my teammates in Pro Tour Boston 2003, where we took home the trophy—as well as also being a national champion, he has two Pro Tour Top 8s, the first of which was this World Championships.

The night before the Top 8, Kyle and Matt were testing Matt’s matchups for the following day. After finishing the first round of testing, they came to the round two matchups, specifically the one against Mark LePine and his mono-red land destruction/aggressive deck. The question was this: If Matt draws a Wild Dogs in his opening hand on the play, is he supposed to play it and risk losing it instantly if LePine has any of his Shocks or Mogg Fanatics? Wild Dogs cycles, of course, which means that Matt could wait and cycle it later in the game with minimal risk. But what if it was his only one-drop? Missing the early creature with an aggressive green deck is not where you want to be. 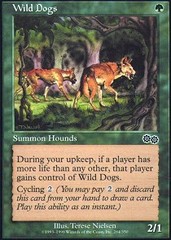 But then, luckily for Matt, Kyle solved the puzzle. Matt had two copies of Uktabi Orangutan in his main deck. Kyle suggested that if Matt drew a Wild Dogs AND an Uktabi Orangutan, he should cast the Wild Dogs because the parlay of Matt drawing a Wild Dogs and an Orangutan as well as LePine drawing a Shock or Mogg Fanatic was just too unlikely. Somehow, Matt was convinced, and the strategy was set. Unfortunately, I don’t think it came up, so we’ll never know if Kyle nailed it or not.

A lot of Peter Szigeti’s antics were mean spirited or over the line. But this particular time, he came up with something clever that to this day remains one of the funniest things I’ve ever seen. Late night at one of the tournaments, there were a lot of people team drafting, as was often the case at the time. Close by the many tables of team drafters was a guy who had just fallen asleep face down on a table. This gave Peter an idea.

Peter went around to all the draft tables and picked up a bunch of cards that people had left behind as garbage. Using those cards, he constructed two feasible, playable Limited decks. He then took the decks over to the table with the sleeping guy, and set up a complete game state. He gave both players hands, creatures, lands, a board presence, a scorepad with life totals, a graveyard etc. After everything was set he tapped the guy who was asleep and said, “It’s your turn.” The guy woke up and looked around very puzzled. He immediately began to survey his hand and the board with a look of astonishment. He clearly had no idea what to do or how to react. Peter said again, “I’m done, it’s your turn.” The puzzlement of the guy began to grow. He looked around in total disbelief. He paused again as he surveyed the situation. Peter said again, very calmly, “Go, it’s your turn.” At this point, the guy stood up, and walked away, with a look on his face that can only be described as a cross between complete terror and confusion.

My first ever Pro Tour was in Rome in 1998. I played a combo deck designed by Dave Humphreys that used Recurring Nightmare in combination with Great Whale and Priest of Gix to generate infinite mana, which could be used in various ways to defeat the opponent. The most popular deck at that tournament was Tolarian Academy-based combo. Sometime during the first day, I was paired against Janosch Kuhn. Janosch was a well known European player, and I expected it to be a pretty challenging matchup.

In game one, Janosch started to go off. He had been using Mind over Matter to repeatedly untap his Ancient Tomb to generate mana, and use that mana to draw additional cards. Unfortunately, I had nothing in my hand that could do anything to interact. From his use of Ancient Tomb, Janosch was at something like -6 life, but the rules were different at the time. You didn’t lose the game for having 0 life until the end of a phase, so combo decks would regularly abuse that fact, and do something like cast Stroke of Genius for your entire library, since if you needed to draw a card and couldn’t, you lost instantly. I knew I was done for, but was wracking my brain for anything I could do to win, as he was going off.

Then I had it. For no obvious good reason at all, I tapped all my lands and announced that I’d be adding five mana to my mana pool. Janosch looked very puzzled. He asked me to confirm that I added five mana to my mana pool, which I did. As players often do, he spent all his remaining mana, and declared his attack phase, with the intention of draining my mana pool (and making me take five points of mana burn). I said with a smile, “Okay, you’re at negative six life, you lose.” Janosch just grinned at me, realizing what had happened. I actually think he respected it, as he nodded, almost in approval, as he picked up his cards.

This story has nothing to do with Magic, but it’s one of my favorites, so I decided to include it anyways. In the middle of the 2000s, I was in Las Vegas for the World Series of Poker. I was playing an event the next day, and my friends with whom I was sharing a room decided to go out. About 30 minutes after I had gone to bed, I heard someone fumbling with the door knob. I figured someone had changed their mind and was coming back to the room. After about a full minute, I still heard fumbling so I decided to get up and see what was happening. I looked through the peep hole, and there was some guy that I’ve never seen before trying to get into the room. As I looked out, I saw the guy from across the hall was trying to help the poor guy figure out where he was and what was going on.

I opened the door and it was apparent that the guy was really drunk. The guy from across the hall asked him what room he was staying in, who he was staying with, which tower he was in, all the basic questions that he could think of to help the poor guy out. He was still wildly flailing his “room key” trying to get into the room, despite the fact the door was now open and I was standing there.

The other guy asked me, “Is this his room?” Naturally, I told him it wasn’t. He asked the drunk guy, “Where is your room?” The drunk guy pointed and said “Here” to which I replied, “This is not your room, also that is not a room key, that is an Outback Steakhouse Gift Card,” as I pointed to his “room key.” At this point he sulked over, defeated, and had us call security so they could help him find his actual room.

Do Not Bluff Jonny Magic

Pro Tour Dragon’s Maze in San Diego, California was a Return to Ravnica Block Constructed event. I wasn’t qualified, but I was helping my team prepare in Portland, which coincided with a Grand Prix. The deck the team ended up playing was a Bant control deck, featuring cards like Sphinx’s Revelation, Supreme Verdict, and the powerhouse of the format: Aetherling. One of the decks we spent the most time preparing against was the white/green aggressive deck with cards like Advent of the Wurm, Selesnya Charm, and Scion of Vitu Ghazi.

I was playing a set with Jon Finkel. He was playing the Bant side and I was playing the W/G side. In one of the games, Jon had fallen a little behind. Jon was forced to tap out on his sixth turn to cast an Aetherling. He wasn’t able to leave any mana up to protect it, but also he knew that I didn’t really have anything that could directly deal with it. I could only attack into it with my 3/3s and use a Selesnya Charm to get through it. Naturally, I knew Jon didn’t have much else to defend himself, since he would have probably played something else, and not played a naked Aetherling. Knowing this, I decided to attack with both of my 3/3s, to represent a Selesnya Charm. If I stayed back and did no damage that turn I’d have virtually no chance to win the game. I didn’t actually have a Selesnya Charm, though, so if Jon decided to block it would be very bad for me.

Jon thought for a little bit, and eventually decided to call my bluff and block. When I put my creature in the graveyard, Jon wanted to be sure that everyone knew what had happened and said, “Hold on a second” as he stood up. He then loudly announced to the rest of the team, “Excuse me, everyone! Can I have your attention for just one second? I would like to point out that I just decided to block Huey’s 3/3 with my Aetherling and he put it in the graveyard. That is all.”

I hope you were able to get a laugh out of some of these stories. Do you have any favorite Magic stories? If so, let me know in the comments. Coming up on my Magic agenda is the Invitational next weekend. After that, I’m heading to Grand Prix: Phoenix where I will try my hand at doing commentary alongside Matt Sperling and self-proclaimed coverage guru Luis Scott-Vargas. Commentary is something that I’ve been interested in for a while and it seems like something that I’ll really enjoy. Tune in to Grand Prix: Phoenix, presented by ChannelFireball and Cascade Games and let me know what you think!