Today I wanted to take a look at the most exciting new Cube release in a while, Conspiracy! Note this won’t be all the cards and I definitely could have missed or overlooked some potential breadwinners. For now I wanted to touch on a bunch of the potential playables or even just cards that look intriguing and different. Let’s get started. 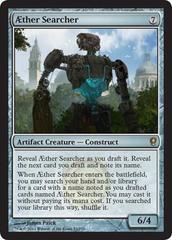 Rune-Scarred Demon this ain’t, but it’s the closest analogue I could find for the card. The major upside is that if you draw your potential tutor target you don’t get hosed. The first time I read the card I thought this wasn’t the case and was disappointed it’d only be an EDH card. So the fact that you can nab yourself a 6/4 alongside another massive creature or planeswalker for seven mana is a pretty respectable proposition.

The key drawback here is: “Reveal Æther Searcher as you draft it. Reveal the next card you draft and note its name.”

You only get one shot at hitting a card you actually want to put in your deck. This means seeing it late puts you in an awkward position if you want anything great out of your deck. If you wanted to make it more interesting in Cube, you could simply ignore that part and reveal it whenever, but right now we’ll go with how the card is written. This is one of the more high variance cards from Conspiracy and one of the better payoffs for drafting in a wacky way. The biggest issue is that if you do take it for a ramp deck or slow control plan, there’s no guarantee you’ll hit an on-color bomb to fetch up. Of course you could just take the biggest card in any color and just roll dem bones that you don’t have an early game dead draw and slam an Aether Searcher for Nicol Bolas or something ridiculous.

Here’s a card near and dear to my heart, back whe a number of Cube owners allowed players to call “Pack!” and take all the goodies. This is slightly different since timing restrictions are off the table, so you don’t have to commit early if you get a pack with 3-4 cards you like 5th or 6th pick since clearly nobody else is in that color. It also allows players to load up on cards for the inevitable black or white aggro strategy that many Cubes have. I’ve certainly seen plenty with a variety of black one- and two-drops just sitting and waiting for someone to take them.

This also allows people to get deep and take certain combos in the same pack. Want Kiki-Jiki, Mirror Breaker and Deceiver Exarch? Well now you can nab them without worrying about one tabling. It’s even better for storm players in powered Cubes since you already are trying to get the stars aligned correctly. I like this card also because it’s an actual 23rd card playable in aggro plans. Ideally you won’t play it, but from experience I can say you’ll be coming up short on playables if you “Pack!” early in the draft.

Notably this card is also close to dead if you see it after the first few picks of pack three. So because of this variance players may not want it in their Cube. While I understand that, I feel like such a sweet effect shouldn’t be overlooked.

This is one of those cards I feel is fun enough to go into a Cube since not having to invest anything into it past the initial cost definitely has me interested. Paying four mana for a delayed draw effect isn’t the best and you’ll never get the Akroma’s Vengeance effect unless your opponent wants you to have it. Still it’s effectively a one-sided Howling Mine (at twice the cost, granted) which is worth looking at in ramp strategies or durdle control. While I’d rather have one of the Jaces, I don’t hate settling for this against midrange or non-red aggro deck. Probably not fitting into small Cubes or people who don’t like colorless drawing, but I’d give it a shot in most. 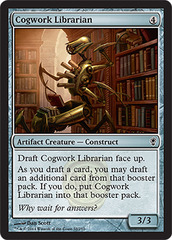 The ‘ol double drafting from a pack in Cube seems sweet and while you’re essentially trading picks rather than getting an extra one, I imagine in some cases it’ll feel very cheatyface. The aforementioned snapping off two piece combos from the same pack comes to mind and the same with reanimation plans where the cards clump together. One of the most common uses I imagine will be snagging a dual and a relevant card from the same pack since that’s one of the more common pick dilemmas. 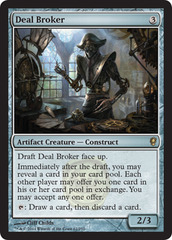 Great card or greatest card? How many times has this popped up in any Draft format where you just wish you could have gotten that one card from an opponent? This is why I really want to see Conspiracy in some Cubes, because the cool effects are just so different and fun from what we’re used to seeing. It gives a little more value to failed early picks or off-color lands that didn’t work out. Although I think it favors mono-red a bit much, since it isn’t hard for them to have 30-35 cards and then a good 9 or more cards to barter with afterwards. Whiff on Sulfuric Vortex, but have an extra Sword you aren’t all that interested in? Let’s make a deal!

As for Deal Broker itself, it’s just a looter, but frankly that’s fine in slower decks and being an artifact makes it easy to power out using whatever random mana rocks you have.

In my judgment, it’s doubtful many Cubes need another Oblivion Ring.

If you have a tiny gold section in your Cube this card won’t be exciting enough to expand it. For everyone else this is a sweet take on Clone by building in haste to the deal, letting you do really obnoxious things. Swinging with haste Titans, giant flyers or getting to use the ability of any utility creature before your opponent is a worthwhile investment. This would likely compete with Phantasmal Image and Phyrexian Metamorph for best clone effect in Cube with only the gold mana really standing in the way.

This creature is on par with power to mana ratio for aggressive decks and his ability puts him into Cube range. Being able to shovel out cards from your library that you’d likely never see and potentially getting use out of them is nice. While there’s a real possibility of whiffing multiple times, you can build your deck in such a way to minimize it and the payoff is huge.
Hitting cards like Shriekmaw, Mulldrifter, Kitchen Finks and so on are all living the dream. Even just snagging random 2-3 power creatures at no card loss is reasonable value. Again, while I understand some Cubes may not like gold cards, many of the ones in Conspiracy are solid and go in under-drafted archetypes.

This card doesn’t feel very impressive, but anything that translates life into mana is worth looking at. The fact that it’s attached to a body as well gives it a little more reason to exist thanks to how much equipment is typically floating around. This is probably just a freeroll for storm players against slow decks and not much else, but I could see some fun post-Wildfire/Armageddon/Upheaval turns if that’s what you enjoy.

As a green finisher, Realm Seekers isn’t particularly impressive compared to some of the other choices. At best you’ll probably net a slightly undercosted 7/7 or 8/8. Being able to dig land cards out of your deck at least makes the Seekers into a bootleg Primeval Titan. Normally not good enough, but since we can only run one Primeval Titan… The value of this card hinges entirely on how good you feel digging out non-basic utility lands is. If you value that effect highly, then it might make the cut for green ramp. If you don’t, then this creature doesn’t come close to meeting the requirements. I suspect it’s only a contender in rather large Cubes that run the full set of utility lands. 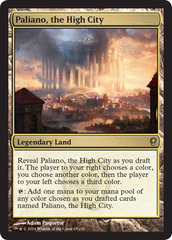 No matter what you’ll get at least one color in your deck, but it’s likely to get a no drawback two-color land. If you get very lucky or go five colors then you’ll have a sweet tri-land with no drawback. Of course if your opponents get lucky or you get forced out of your colors, then you’ll be looking at a card worse than a basic. Most of the time though, you’ll get a dual that you can safely play.

Some of the play here is going to be in team drafts where there’s a real incentive for your draft mates to figure out what you’re playing. The perfect time for this is going to be in pack two or three where there’s enough information to make reasonable guesses. If it pops up in pack one, those are the times I’d suspect someone will get to freeroll their dual land. Of course it’ll also tell the table at least what main color you are, which makes things awkward in team drafts.

As for the actual conspiracy cards, without playing them I’m not sure what exactly to think of many. Some are clearly very powerful and others just won’t work very well in a setting with only 1-ofs. Their effects really need to be tried before you can make any sort of reasonable argument one way or the other. Of course, before we get to that we need to decide if you even want to include these types of cards in your Cube.

The upsides is that like many of the Conspiracy cards, there’s such a wide variety and a sense of doing something different included with them. They also don’t need to fit directly into the drafting portion and can be included as a supplemental section if that fits better. It wouldn’t necessarily muck up any normal drafts and let conspiracies run wild as late-picks because people didn’t know what to do with them.

On the flip side they may just play too heavily into their own kind of variance, hands or archetypes that only work with specific Conspiracy effects and otherwise falter. They may unduly influence how people want to Cube and not be worth it to some owners. Personally I’m all up for trying these and seeing how they play out and then sidelining or tweaking the conspiracies included as necessary.

Anything that lets you get away with smaller deck size, massive card selection from opening hands, or turns all your stuff into utopia lands seems pretty warping. There are a few others that may also be a little too good for regular play, but hey if they weren’t powerful we wouldn’t even be considering them.

Until I get to play with them though, I’ll leave off judgment and I imagine many will do the same. Some will simply not want to touch cards that do something so unique, throwing them into the Unglued/Unhinged no-mans land and I can’t fault anyone for it. I just encourage people to give it a try. I’m looking forward to calling, “Pack!” once more.