It’s game 3. Your opponent just misplayed against you 15 times in a 20-turn game, and still won. After the hand shake you are treated to, “so the reason I killed your morph was that I had Ugin in my deck and it can’t kill colorless creatures.” Thanks for the tip.

I listen and nod, but one time I’d like to respond with, “Do you have any update on the Debilitating Injury that Jeskai Windscout suffered in the third quarter?”

“I don’t have any information yet. Our medical staff is going to take a look and we’ll go from there. Next question. Buster?” [points to Buster Olney who was watching game 3].

Buster Olney: “Any concern about the atmosphere in the clubhouse after you keep sideboarding in Bloodfire Mentor but Glacial Stalker still starts every match?”

“We rely on our veteran leadership in the clubhouse.”

Meanwhile at my press conference:

“This guy’s poorly built 4-color Sealed deck IS WHAT WE THOUGHT IT WAS, and we let ‘em off the hook.”

“Will the rebound cards in the set help you rebound from this?”

“We’re on to GP Cincinnati.”

“You never draw your Citadel Siege, does it still have what it takes to be drawn?”

“We’re on to GP Cincinnati.”

As a society, we should be tracking the angle shooters so communities can protect themselves. If a local shop in Philly knows that Joe Blow tries to counter uncounterable spells with no intention of pointing anything out, we can’t just let him relocate to Boston or play a Grand Prix without giving any notice to the new opponents.

I propose an Angle Shooter Registry that tracks known, registered angle shooters (enlightening definition, I realize). You got suspended for 1 year for claiming you didn’t draw a card yet to avoid a game loss? Congratulations, you’re now on the registry.

A registered offender must begin each match with a statement to the opponent and both neighboring matches that he is a registered angle shooter and cannot be within 500 yards of a sideboard outside its deck box during gameplay.

Here’s where things get really awesome. There is an app that displays a map of the pairings each round, with every table in the tournament depicted. Every registered angle shooter appears as a red dot on the map.

I’ve ranted about this before, so I’ll keep it short. Nothing has changed and it still sucks. You know what making Day 2 at 4-4 feels like? It feels like the head judge said to you, “all right, you can play day 2, but first you have to write a 2,000 word essay on the history of the missed trigger penalty guidelines.”

“Just don’t play Day 2, it’s optional.” This is the most annoying part. If you’re trying to get Pro Points, you can’t just sleep in when it’s possible to earn 15 points by winning out. This is not inconsistent with the desire that as a matter of policy, only people with a record of 5-3 or better be allowed to compete for those 15 Pro Points. File this argument in the same drawer as “people who want taxes to be raised can just cut the IRS an extra check.”

Remember, they don’t give out extra prizes, they just invite more people to Day 2 to compete for the same number of prizes. Let the Day 1 cut do its job.

How does an ability this similar to a set’s keyword not use the keyword? It would still be busted in Limited and about as powerful in Constructed, but would actually work the way you thought it worked the first time you play with or against it.

Why not have Heir of the Wilds get +1/+1 if you control 5 power and not use the word ferocious?

Did somebody submit the following card?

It’s a little different from morph, so it doesn’t use the morph keyword. Solid idea, this is a good way to spend our complexity budget in a set where there are 350 cards and 900 modes. Why use the set’s keyword?

6B. 5/5. You may pay 1 less to cast this for each non-planeswalker card you exile from your graveyard.

5) The State of Pairings and Standings and Results Technology

I show up to a tournament, and pairings are available on my smartphone only some of the time. So now I’m in a huge mass of people whose surname begins with S-Z and—oh my god, I have to mention this guy before I forget:

It’s cool man, nobody behind you between Smith and Stolzman needs to find their name. Just keep acting like it’s your menu at a restaurant. We can wait.

Then I go to check standings on the Wizards website (well, I don’t go to the website directly—I’m not insane. I go to Twitter to find the link from the @magicprotour account) and I’m taken to a page that contains no information other than what can be conveyed in a plain text table… and it somehow takes 60 seconds to load. Wizards has made a text list of names and point totals actually take up a considerable chunk of data and therefore load slowly. It’s probably the table’s layout that is large and slow to load? I’m not sure, but it’s just absolutely insane how small a problem or non-problem Wizards needs to create a poor user experience.

I’d love for them to post standings, pairings, results as .txt rather than .html and just forgo all formatting, which is a somewhat insane request in 2015. But I’m confident they could do it. Notepad is the tool I trust them to use. If they work hard and prove themselves, I’ll let them have Notepad++.

6) The Pick Heard ‘Round the World

When I heard of Pascal Maynard taking a foil Tarmogoyf despite it being clearly a worse pick for his deck in the Top 8 of Grand Prix Las Vegas it sounded like a really bad pick to me. I wouldn’t go so far as to say I was baffled, offended, or anything like that, but I did not like the pick. I’ve lost in the quarterfinals of a Grand Prix and I’ve lost in the finals of a Grand Prix. If that happened and I had the feeling, well actually the knowledge, that I didn’t try my hardest to win because I wanted to snag a chase rare, it would not sit well with me. Cards like Tarmogoyf come and go but I can tell you exactly how I lost any Top 8 match I’ve ever played at the GP/PT level.

That would be my approach, but I have to admit I’ve now spent more time thinking about it than the ~45 seconds Pascal was given to make his decision. The lesson for me was that the pro players on Twitter strongly condemning Pascal showed a real lack of empathy and were just acting pretty strangely about the whole thing.

They’ve mostly fixed the issues around creating a Wish List of cards you need if you’re trading FOR an entire deck or most of a deck. It works really well once you get the hang of it. But what if I want to trade an entire deck or loan it away? I have to go through my collection and add each copy of each card to my active trade binder. Guess where all the time is spent loaning a deck to a friend or transferring it between accounts?

Another drain on the time of this process is that in the trade window Select All + Add All to Trade is not available. You have to Select All and then drag the selected area into the trade multiple times, since 1 drag moves 1 copy. Shortcuts would be really helpful.

My overall progress report for the usability of MTGO is positive. At least with my computer (bad graphics but lots of memory and CPU), I rarely encounter problems that require a restart of MTGO. I got 35 QPs in the May season without many issues. If you’ve been staying away from MTGO until the stability of the technology improves, it might be time to check it out again (with at least 12-16GB RAM). If you’re boycotting until it gets overhauled, continue to do so since obviously this has not happened.

As much as I’ve enjoyed the stability of the gameplay, wow is the MTGO economy bad. 1v1 queues cost 2 tickets per player to enter and the winner gets a pack worth ~1.7 tickets.

Restructuring payouts is something else they could do, and an adjustment here might be needed if the packs have a floor value of 3. Starting with a reduction in payouts would probably feel pretty bad for established players, and if events don’t fire that’s a disaster for that offering (whatever it may be). Setting a floor does a better job of leaving most things intact while stabilizing the event payouts in terms of actual purchasing power.

The MTGO team might be concerned about Event Ticket inflation if they prop up the price of packs using event tickets. This is the concern that comes to mind if you think of Event Tickets as a currency and boosters as a sort of product/bond in the context of buyback-for-3. If Event Tickets get cheap, people won’t use the MTGO store, or so the theory goes.

I’m not an economist, but if they give out packs in ways that always consume tickets (require more tickets put in than tickets put out counting all packs as 3 tickets) then I don’t think the running of an event can be inflationary. If running an event isn’t inflationary, and that’s how non-MSRP packs enter the market, then where would the inflationary pressure come from? Having expensive packs would consume drafters’ tickets in the sense that it costs more to enter when entering with packs. I suspect this works out, and I strongly suspect it’s worth at least trying or modeling carefully given the tragic state of the current economy.

9) Free Cosplay Idea of the Month 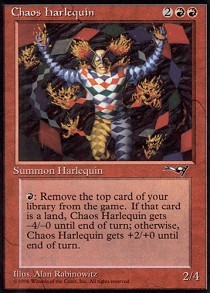 Let me know what you think about any of the above topics below in the comments or on Twitter @mtg_law_etc.