Magic: the Gathering is played turn by turn.

For example, let’s say you want to build a deck around Relentless Rats. 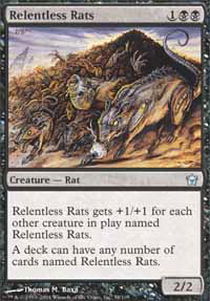 Let’s take a look at what this Relentless Rats deck looks like on a cost sort to see how it plays turn by turn.

The cost sort reveals your turn-by-turn plan to be lacking. You have nothing going on turns 1 or 2. On turn 3 you have only 1 option: Relentless Rats. Not until turn 6 can you possibly do 2 things, and that’s only to play 2 Relentless Rats.

This deck is not prepared to be competitive against any opponent, because it does not plan to play turn by turn.

Relentless Rats is not hopeless, however. The cost sort revealed a need for 1- and 2-mana plays to start the game and provide more options on turns 4 and 5. With this information we can make a competitive deck.

When building with Relentless Rats you are looking for 1- and 2-mana plays to fill out the deck. If you start creating your position or destroying your opponent’s position from turn 1, you can make a much more competitive deck.

Here’s what I’ve come up with.

How about Aether Vial for a turn-1 play? Aether Vial can start putting out a Relentless Rat every turn by the 4th turn. That’s 2 Rats a turn starting on turn 4. Aether Vial puts you a whole 2 turns ahead of turn 6.

If you’re stuck on only 1 or 2 lands Aether Vial can still provide a stream of Rats. This card is a must in a Relentless Rats deck as a turn-1 play.

Inquisition of Kozilek and Thoughtseize make for great destructive plays to start the game. Targeted hand disruption starting on the 1st turn can slow down any deck or tear certain decks apart.

Starting with discard on turn 1 is a great way to soften an opponent up for Relentless Rats. 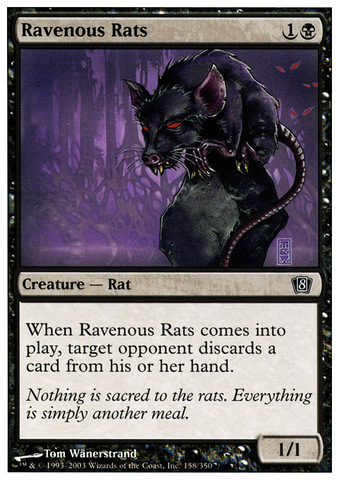 Pack Rat and Ravenous Rats are great turn-2 plays to follow up hand disruption. These 2-mana creatures also come out nicely on turn 3 from Aether Vial.

While Ravenous Rats can wear the opponent’s resources even thinner, Pack Rat can take the game over by itself.

The 3-mana activation option can get going from turn 3—it can replace your Relentless Rats plan or supplement it with the help of Aether Vial. 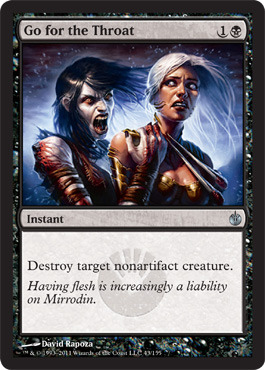 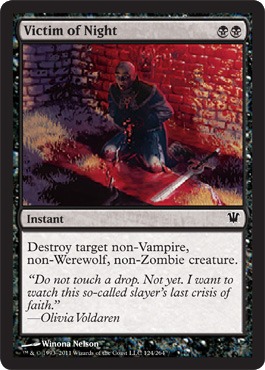 Creature removal to further disrupt the opponent or remove anything that slips through the cracks is important for a black deck. There are a lot of great removal options starting on turn 2 that can kill high-end creatures. 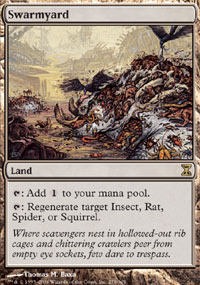 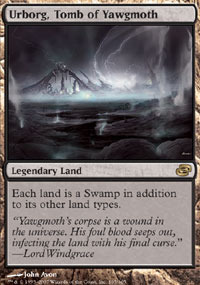 Swarmyard and Mutavault provide way more flexibility in mana options and are nicely supported by Urborg, Tomb of Yawgmoth.

Swarmyard is absolutely crazy at protecting a Rat army for 1 mana, and Mutavault is a nice extra Rat creature that can attack or block.

These lands offer significantly more options when you hit 4 or 5 mana than a mana base with only Swamps.

Finally, you can fill in the deck with Relentless Rats. I think 15 Relentless Rats is a good number. That’s 1/4th of your deck—you can expect to start with 2 and draw into your 3rd, 4th, or more.

If you can protect 4 Relentless Rats that’s 4 three-mana 5/5s. You don’t need more than that, and with discard and Swarmyard protection you can usually expect them to live.

This Relentless Rats deck is designed to play any opponent, turn by turn.

The cost sort reveals 1/4th of your deck to be black lands, 1/4th 1-mana plays, 1/4th 2-mana plays, and 1/4th 3-mana plays. We have some added flexibility with colorless lands, Dismember, and Pack Rat activations.

Whatever deck you build, build it turn by turn.

If you do not build on a cost sort, it is likely the single most useful thing you can do to improve your deckbuilding. You can make any deck competitive with this method—Relentless Rats, or anything else.

For those interested in the Rats deck, stay tuned for the video series this week. This deck IMPRESSES.

For the deckbuilders in general, I hope you found this exercise useful.

Sort your deck to reveal its turn by turn plan. Identify holes. Gather information. Fill holes with a variety of options to prepare your deck for a game of Magic: the Gathering with a real live opponent.

Let me know if this helps!