Given how many +1/+1 counters are floating around, I think this card is going to crush. It’s got a solid set of stats, and can just hang out and toss counters until the opponent is dead (or all their creatures are). That works for me, and I’m happy to pick up more riot or adapt cards than normal once I have this.

Cindervines is still a sideboard card, despite the ping effect being somewhat broad. It doesn’t do quite enough without having good targets to kill, so bring this in and treat it as a Naturalize with upside.

Clan Guildmage pushes the spears pretty well, but is somewhat lacking when you don’t have a good offense lined up. That, plus the need to spend mana each turn, makes me less high on this than some of the other Guildmages. Note that the green ability puts your lands at risk, so it’s not just sending in a 4/4 token if you use it.

Domri is good as long as he has some backup. So much for that Gruul independence, eh? Finding and playing a stream of hasty/large creatures is powerful, so try and stay ahead on board, and Domri will deliver.

Frenzied Arynx is a pushed common. It’s either a 3/3 haste or 4/4, both of which have trample, and in case that wasn’t enough, this has a pump ability. That is a ton of rate and abilities, making me think this got moved from uncommon at some point in the process. Either way, I’m in a frenzy thinking about getting decks with two or three of these, as they are huge threats at any point in the game. You mostly want this as a 4/4, but there are definitely games where the haste mode is better.

Gruul Spellbreaker is an elegant way to stop Settle the Wreckage in Constructed, or at least an effective way. In Limited, this is a beater, and I’d happily play it on stats alone. It’s mostly just a 3-mana 4/4 trample, which spells broken to me.

Nikya of the Old Ways

The asterisk there indicates that some decks just can’t play this card. If you have Nikya, I’d look to play 2-4 spells max, and hope you can use them in the early game. This effect is super powerful, and I think very good. Turn 5 Nikya, turn 6 dump your hand of creatures is a nice play pattern, and it isn’t like the opponent can ignore a 5/5 either, so you will unlock your spells. I could see Nikya being an even bigger bomb, deckbuilding constraints and all. Note that you can use the extra mana on adapt, which is absurd too.

You have a couple choices here, and all of them are great. This eats one of the opponent’s best creatures right away, and either cracks in as a 4/5 haste or sits there as a 5/6. Note that the fight does damage this, so you are less likely to want to haste it up as a result. I don’t think you can even pick the non-fight mode, so let’s save that one for Constructed.

Rhythm of the Wild

It will be awkward when you topdeck this late in the game, but it’s so powerful early that I’m willing to take that risk. Once your creatures start getting down with the Rhythm, your opponent is forced to either leave back blockers to fight against haste, at which point you just choose +1/+1, or try and race, at which point haste wins the day. Plus, it randomly hoses counterspells, which can be a nice upside. 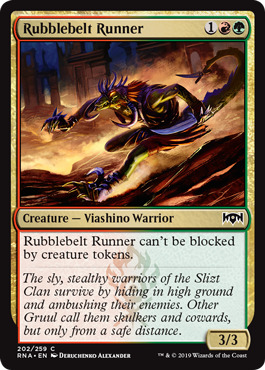 Not much to see here—you’ll run this, it’ll be solid, and every now and then it will avoid some Spirit tokens and you’ll get extra damage through.

I’ve been impressed with this so far (watching people play Sealed on Twitch), as this mostly leads to a nice smashing indeed. You get to kill just about any creature you want, and the +2/+2 means that you often have a nice attack afterwards.

The casting cost on these does limit them a tiny bit, but this is still a 4-mana 5/5 that’s hard to block. That goes a long way, and if you do smash them, you also get to smash an artifact or enchantment for additional value.

Gruul has a lot of overstatted monsters, and a 2-mana 3/3 definitely fits the bill. Sometimes Zhur-Taa Goblin will want haste, but most of the time you should just choose the Watchwolf mode. 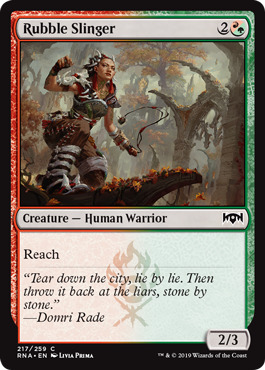 This is both defensive and mediocre, and Gruul is interested in neither. Maybe a Simic deck wants Rubble Slinger, but I’m still suspicious.

I’d always play Colossus in my R/G deck, and getting a free Plummet is a really nice bonus. This will usually trade up in mana and often get extra damage through, and is both a finisher and a defensive measure.

Thrash is an efficient removal spell, and isn’t even a fight card—your creature just pummels theirs. Add to that a 4/4 trample for 4 and you’ve got an excellent card. Both halves are powerful and cheap, which makes for a card that’s never bad. Two cards that would get a 3.5 and are good in different situations makes a 4.0—that’s just math.

Welp, this card is absurd, and perfect for the midrange/aggro Gruul strategy, while also being good if you end up in Gruul ramp/control. That’s the right kind of card to take early, and easily the best Gruul common.