Hey folks! I’m back with another entry in my 5 for 50 series, where we take the 2014 Commander precons and revise them with a total budget of $50 each!

$35 of that goes to purchasing a precon, leaving us $15 (or 15 tix, more accurately) to spend on cards to modify the deck. I will be using MarlonBot for all pricing for these articles—not because I like them in any special way or because of any endorsement deal, but because the web interface they have lets me search for any card and get its price in tix.

Last week we discussed my irrational dislike of Teferi and my totally rational dislike of the precon as compared to the others. This week, we’ll be exploring the world of equipment with Nahiri and her many friends. Let’s see what the Lithomancer can offer to a discerning planeswalker: 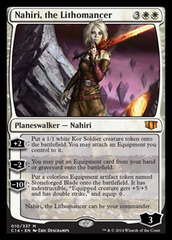 Nahiri’s +2 is fantastic. So often, the limiting factor of “Voltron”-style decks is that they spend turn after turn moving equipment from creature to creature. Nahiri gives us a little bit of a leg up on that, and she also helps to solve one of the other problems—reliance on a particular permanent type.

Her -2 is great for saving on payments for equipment, but its best use is probably bringing an equipment card back from the graveyard. Of course, her ultimate is very amusing. While the Stoneforged Blade can be exiled and is not quite as much of an “I win” button as, say, the Ob Nixilis ultimate, it’s quite satisfying to bash people to death with it. Lack of any evasion is a little sad, but we have other equipment for that, right?

Unlike the Teferi deck, this deck is pretty focused on a single theme. (All 5 unaltered deck lists are available on the Mothership—go see for yourself!) I’m sure we’ll end up cutting just as many cards from this deck as we have from the others despite how focused I’m claiming it is, but you know, there’s something to be said for consistency. Let’s check out what I think needs to be axed:

Whitemane Lion – I’m not sold on playing this in a deck about equipment. I’d call it Rescue Cat, but that’s apparently a Yu-Gi-Oh! card.
Containment Priest – Go be in a Legacy sideboard somewhere.
Angelic Field Marshal – The more I think about it, the more this is an unexciting lieutenant.
Adarkar Valkyrie – I think we can spend our mana on something that has more synergy with our deck.
Commander’s Sphere – There are better rocks, and we need more room.
Celestial Crusader – This isn’t a dedicated token deck, and Crusade is often mediocre in Commander. Plus, symmetry matters.
Midnight Haunting – We can get more from this slot.
Armistice – I know this deck will need to draw cards, but there are cards that aren’t completely horrible ways to do that.
Marshal’s Anthem – Our creatures are frequently too small for reanimation to be worthwhile, and the anthem effect is underwhelming.
Wing Shards – We don’t have a lot of ways to increase the storm during our opponents’ turns, so I’m not optimistic about how big this can go.
Sacred Mesa – I think you’ll like the card I’m going to replace this with.
Afterlife – I know we can find a better removal spell—probably something that exiles permanents.
Benevolent Offering – Sure, we can use the tokens a little better, maybe, but I honestly think we can solidify our theme a little more.
Karoo – Yep, Karoo.

Well, try as I might, I could apparently only cut 14 cards from this deck: 4 creatures, 9 noncreature spells, and one copy of Karoo. The Jazal and Nahiri themes align decently well—tokens are good at being expendable equipment holders—so I’m not particularly surprised that this worked out this way. Obviously there are some sweet cards we can add, so let’s not delay any further—what goes in? 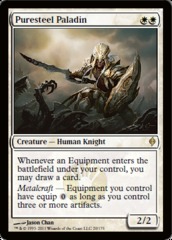 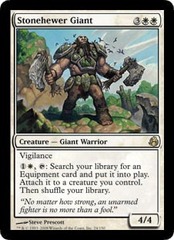 Obviously digging equipment out of our deck is going to be a priority, and Stonehewer Giant provides us a great way to do just that. Shoving the equipment directly onto a creature doesn’t hurt either, and it’s obviously very much in the style of Nahiri. The vigilance allows the Giant to participate in combat—probably while wielding many axes—and still grab some more equipment from his toolbelt, even during the fight! 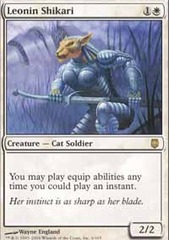 If we have Puresteel Paladin in play with metalcraft and Leonin Shikari alongside it, combat is actually going to be impossible for our opponents. Even without the Paladin, Leonin Shikari provides an incredible amount of flexibility as well as a reason to be scared of our open mana later in the game. 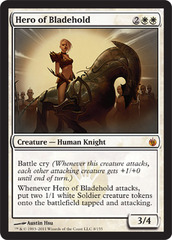 This card is the very definition of “army in a can.” If you keep the Hero strong and let her have access to the best equipment in your armory, you won’t go wrong and you’ll be able to support a large army of battle-ready tokens. It doesn’t hurt that she works well alongside Jazal either! 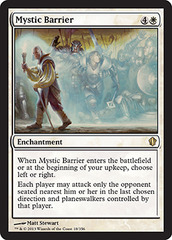 As an aggressive deck, often the ability to be beaten up on or the distraction of a split focus can be a problem. Mystic Barrier obviates the need for any pesky “thinking about who to attack” or wondering who you’ll have to defend yourself against. Of course, if this gets destroyed quickly, it’s quite a waste, but if you wait to cast this until your opponents have run dry on cards a bit, you’ll have much better luck. 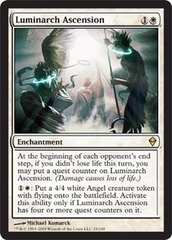 If you play this on turn 2, don’t bother playing other cards. Just make Angels until this gets blown up. You’ll get a ton of counters, so you won’t have any problem meeting the requirements. Be careful—my wife cast this on turn 2 in a 5-player game recently and got attacked pretty mercilessly (by me) afterwards, so the political ramifications can come back to bite you. (To be fair, my wife played the politics pretty well, attacking the player who reanimated Vorinclex twice until he died and then turning to me, so really, I was the problem, but I’ve seen it go bad before.) 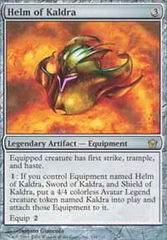 Obviously we don’t necessarily play this for the abilities it grants (although those abilities certainly aren’t bad)—we play it for the ability to make the Kaldra token! Helm is a little vulnerable without access to the Shield, so be careful when you play it. That being said, there’s really no problem with the Helm as its own card other than the fact that it’s a little expensive. 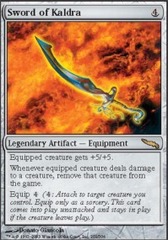 The least expensive of the three Kaldra bits, the Sword often acquits itself best when kicking around by itself. Compared to Godsend, it doesn’t let us block for exile value, but it does let us swing with a much larger creature. Honestly, I’d prefer to have this around most of the time, especially in concert with its two Mirrodin-block set symbol cohorts. 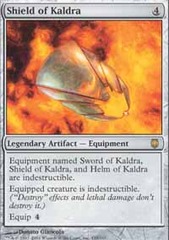 There are a lot of situations where we’ll want to make a suited-up creature indestructible (Kemba, anyone?) and the Shield is a great way to make that happen as a backup Darksteel Plate. Obviously it’s more than that when the other Kaldra pieces are in play, but some of the time it will be relegated to backup catcher. (Get it? It’s the Plate backup? Ha, ha.) 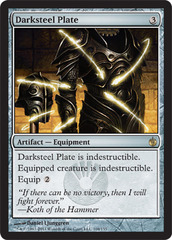 Like I said with Shield of Kaldra, making something like a Sun Titan indestructible certainly makes attacking with it more palatable, and making a big target like Kemba indestructible obviously has a serious effect. 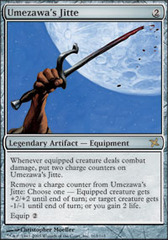 I couldn’t even fathom making a deck like this without a marquee equipment, and Umezawa’s Jitte fits the bill. It does whatever you want for little mana investment and no abnormal requirements (just attack people with the thing that has the Jitte!) Sure, it costs a decent percentage of our budget, but when compared to things like Swords that have to hit to have the effect you want, Jitte is probably the best investment we can make. (If you want to play the severely non-budget version of this deck, I recommend loading up on Swords!) 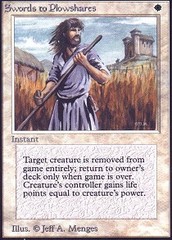 No, I didn’t mean to put an equipment in this slot, I was seriously saying Swords to Plowshares. Ordinarily I’d say Path to Exile would be good here, but that costs about 3 tix, which is a little rough for this budget. (That’s two thirds of a Jitte, after all.) Regardless, there will be the occasional threat that we simply need gone. 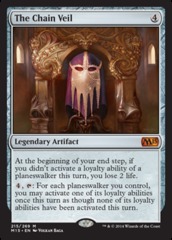 Can we just get this tattooed on all of the planeswalker commanders and move on or something? Seriously, this card is bonkers. Usually this will be used to go loyalty-neutral on Nahiri for the turn with a -2 to grab an equipment and a +2 to attach it to a token, but sometimes we will just want to plus to the skies in an effort to get the -10 going. 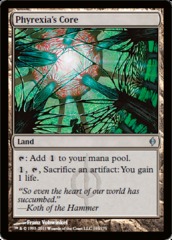 Use it to sacrifice equipment that are about to bite the exile bullet. Yeah!

Okay! We’ve made our modifications, so what does this deck look like now?

Okay! That’s it for this article and this go-round of the 5 for 50 series. Next week, I’ll be bringing you some holiday cheer!