After Theros block mostly failed to shake things up in Modern, it looks like Khans has dropped a heaping helping of Modern playable cards to really change the format. Monastery Swiftspear, Treasure Cruise, and Dig Through Time all have proven to be powerful enough for Legacy, and I think there are other new cards that will be making a splash in Modern very soon. What I want to talk about today is a brand new Modern combo deck that is powerful, consistent, and fast.

I was able to test this deck on Magic Online just after the set released (videos of which are going up tomorrow night!), but due to some card availability issues, I was only able to find 3 copies total of Ascendancy to play. It didn’t even matter—of the 2 Daily Events I played I won all 8 rounds convincingly despite playing an admittedly suboptimal list. The deck was incredibly consistent, winning on turn 3 if the opponent didn’t offer disruption, with turn 2 a real possibility (t1 mana guy, t2 Ascendancy and Probe for life).

It’s also very good at winning on later turns through lots of disruption thanks to the sheer volume of cantrips. I’ve had games where my opponent destroyed an Ascendancy or two in the same turn, but thanks to the amount of looting and Cruising I was doing, I was still able to get there. The plan of the deck is to get one or more mana dorks into play, get a Jeskai Ascendancy into play, and then play a ton of cheap cantrip spells. Each spell untaps your mana guys and lets you loot away excess lands or other mana dorks you’ve since drawn into. All the while, your mana dorks are growing with every spell you cast until eventually they’re large enough that you can either attack for the win or Glittering Wish for Flesh // Blood and shoot your opponent for 20+ damage. I’ll go through and break down some of the key cards in the deck:

This is the core of the deck, the engine that allows you to draw all those cards and generate all that mana. Most of the time it’s pretty easy to go off the turn you play Ascendancy, so no need to rush it into play if you don’t think you can get value off of it.

Glittering Wish works very well in the deck by acting as an additional 4 copies of Ascendency or as a great card draw spell while going off with Scarscale Ritual. Because of Ascendancy triggers, your creatures will be large enough to survive the -1/-1 counter put on them. It also allows you to have access to answers to hate in Wear // Tear, Fiery Justice, Reborn Hope, or Guttural Response. While it’s usually ok to loot away extra Wishes while going off, remember that you often need access to one after making your guy large so can actually kill them!

These are sort of the “typical blue cantrips” you’d expect to see in most combo decks, and they perform that role quite well. Before you go off, they help you dig for whichever combo piece you’re missing and while you’re going off they at worst are mana neutral and provide you with a ton of selection while looking for whatever you happen to need.

These are the “mana producing” cantrips. With Probe you’re playing it for life, allowing you to float a mana off your mana dork before the untap trigger. Manamorphose replaces itself mana-wise while also letting you filter your Noble Hierarch mana for red if you need it for Crimson Wisps, a second Ascendancy, or Flesh // Blood. Cerulean Wisps is probably the worst cantrip in the deck, but if it’s targeting a mana dork, it nets you a mana with Ascendancy in play or is mana neutral without one.

WOW. This is the card that lets the deck be so resilient. Imagine the following totally realistic scenario: Turn 1 Windswept Heath for Breeding Pool, play a mana guy. Turn 2 Cerulean Wisps your dork, cast Manamorphose, cast Probe, second fetchland, Serum Visions, Treasure Cruise exiling your graveyard. For those keeping score at home that’s a turn 2 Ancestral. The card is also phenomenal in almost any late game scenario, as well as being great while going off. All the free looting from Ascendancy as well as all the cantrips mean your graveyard can get pretty full in a hurry if need be.

This card lets you go off from an empty board or start netting mana off a second mana dork while you’re in the process of going off. It’s also not the best in games where you’re facing down a lot of hate, but I think it’s an effect you want access to in some number.

Often, going off will be relatively simple. You have all the cards and mana you need and just go through the motions until they’re dead. However, in the games where things get rough, it’s important to think about your outs. You’ll usually be constrained on just one resource, either mana or cards, which makes it important to figure out early which one you’ll want to prioritize. This should help inform whether you loot away that Manamorphose or Glittering Wish in the early stages of your combo. Don’t forget that the looting part of the Ascendancy is optional. There will be games where you’ve been disrupted some and you need to make sure you don’t get decked while getting your mana guy to 20 power. Finding and playing a second Ascendancy can also be helpful in these cases because you’re getting +2/+2 for each spell, making the overall number of spells required much lower. Lastly, don’t be afraid of getting “stopped” when going off. It’s not like Splinter Twin where you’re down a ton of resources if they kill your Pestermite when you go for it. Worst case you got 1-for-1’d and you have to find another piece.

Cards I Don’t Think Belong in the Deck: 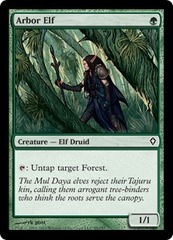 I think 12 mana guys is about the upper limit and Arbor Elf is a bit clunky in some draws where you don’t want to fetch Breeding Pool. 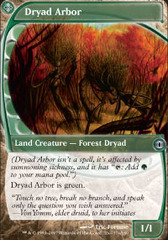 While this card sounds great in theory as a mana guy you can tutor up with your fetchlands, this deck is hard pressed to spend a pile of green mana very well. Also drawing this card in your opener will make you physically ill.

The Flesh // Blood kill is just cleaner and doesn’t require any dead cards in the main deck.

Cards that I Think are Worth Considering 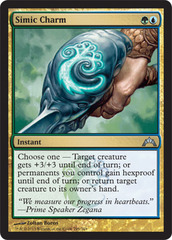 This one can counter Abrupt Decay on Ascendancy. The thing is, I’m not really convinced it’s better than just having a few instants available as you start to go off to respond to the Decay with and draw into a second Ascendancy. 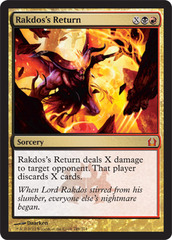 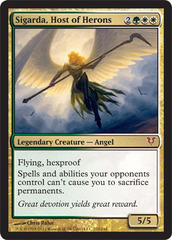 (again, in the board)

This would be for games where an opponent keeps a hand loaded with disruption, but without much of a clock. You just switch game plans and either kill them dead with Sigarda or empty their Abrupt-Decay-filled hand with Rakdos’s Return. 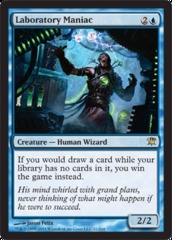 I think this is probably much, much better than Grapeshot if you’re looking for a win condition that goes in the maindeck because it can let you beat infinite life from a pod deck or some sort of scenario involving Angel’s Grace (you get the Maniac into play with no cards in library and 2-3 instants in your hand to win during their next upkeep).

Remember that this is a pure combo deck. You have no real plan for winning other than going off so be careful not to sideboard too much! Fortunately 7 of your cards can’t really be brought in because they’re Wish targets so that leaves you with probably only wanting to board in either Leyline or Swan Song (or neither!) depending on the matchup. It should usually be pretty obvious which one you want so that leaves you deciding what should be boarded out. In general, I think that Cerulean Wisps is the most cuttable card. Post-board games are generally going to go longer because your opponents will have additional disruption which means you won’t be as pinched on mana when trying to go off. Add to the fact that it requires a creature in play to cycle, and you’ve got an easy cut in my book.

Cards I Expect to Be Good Against Ascendancy

This deck is the real deal. Regardless of whether it’s something you’re personally interested in playing, you need to be prepared for it. Here are a smattering of cards I think you’ll want to have access to. 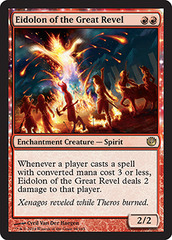 This is probably the best possible hate card. It provides a fast clock, will cost at least 4 life to remove (Wish + answer is 2 spells) and absolutely cannot be ignored. 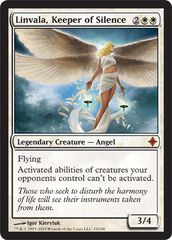 This is a very scary hate card because it constrains your mana so badly. It’ll probably take 2 turns to cast Glittering Wish and then cast the Fiery Justice you find, and it provides a pretty reasonable clock all by itself. The one silver lining is that the Pod deck can’t protect Linvala with Spellskite because you can put one of the Fiery Justice damage on the ‘Skite to prevent redirection. 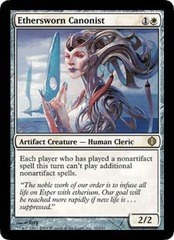 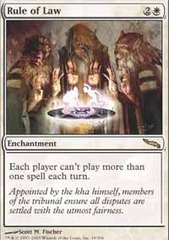 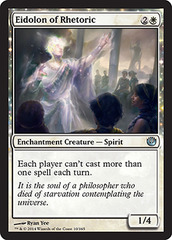 Because the deck doesn’t run Bolts, all 3 of these are roughly equal in terms of difficulty to remove. The deck is all cantrips though so if this is the disruption you’re packing be sure you’ve got a clock as well because they’ll find an answer sooner than you’d expect. 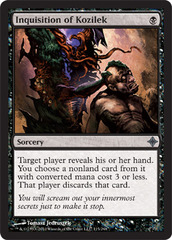 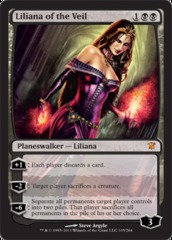 Hand-disruption-based interaction is not the best form of disruption against this deck because of Treasure Cruise in game 1 and Leyline in post-board games. You’ll rarely be able to select the Cruise with a Thoughtseize because of the threat of them comboing off, but the extra gas they find off of it will outpace the disruption. If you want to go this route, you need to also be presenting a pretty serious clock to make it all worthwhile or they’ll just cantrip into what they need and beat you anyway. 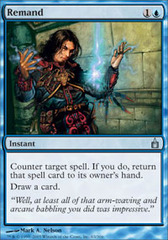 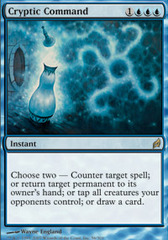 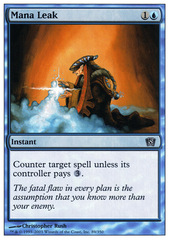 These seem like they would be great, but in my experience they have a similar problem to hand disruption. If you have a clock backing up your counterspells like a Delver or Geist of Saint Traft, I would expect them to be effective but otherwise the burden of having to hold up mana every turn just ends up being too much.

I’m very interested in seeing where the metagame shifts with this powerful new combo deck on the horizon. If there are any cards I missed as potential inclusions, be sure to talk about them in the comments!

And remember to check back tomorrow night for videos of me piloting this deck on Magic Online.