In Vintage, no cards are banned—aside from the ones that look like they should have come from an Un- set by today’s standards—but there is a long list of Restricted cards.

It would be the best format, were it not for 3 problems:

But aside from that, the format is fantastic, and I’m always excited to compete in a tournament. On top of that, owning the Power 9 is one of the greatest dreams of every Magic player—and I felt like I needed to fulfill that dream.

Yes! I was crazy enough to purchase a Power 9. I often play with some friends who only play Vintage, and I was so jealous when they would leave for a real tournament and I couldn’t attend because no one would lend me those ultra expensive cards. I told myself that it’s an investment, but the reality is that I wanted to cast a real Black Lotus for once.

The Vintage Super League is probably the biggest stage for Vintage at this moment, but it fires at 3 a.m. European time on Wednesday. You can look up recordings and deck lists, and that isn’t nearly as fun to follow.

Still, whether you’re playing online, watching the VSL, or competing in real-life Vintage tournaments, it’s clear that Paradoxical Outcome is the biggest card to hit Vintage in some time.

This card is the real deal, and there’s even talk of a possible restriction in the future. It’s a pure explosion of mana and card advantage alongside mana rocks, and you can build your deck so that this card is an auto-win if it resolves.

Reid Duke wrote an article about Paradoxical Storm—but I’m going to show you a different way to abuse the card:

Just because you don’t have Tendrils of Agony doesn’t mean that you can’t win in a single turn. As Reid showed in his latest video, this card is easily capable of drawing your whole deck by bouncing all of your artifacts and drawing that many cards, then you can play another copy of Paradoxical Outcome to go off. Here you can win “in a single turn” by casting Mentor, a huge number of spells, then Time Walk.

In addition to this draw engine, you have Thoughtcast, a card that is already abused in Tezzerator. Here you have a huge number of artifacts, and it’s not hard to cast it for 1 or 2 on turn 1.

Mental Misstep isn’t usually great in Storm, but this deck really needs to protect itself from Pyroblast.

After some testing and some tuning, we arrived at this final deck list:

A Couple of Changes

Bauble is definitely not a powerful card or anything—in fact, this is the card that is most likely to get cut after game 1—but it works well with Thoughtcast, Mox Opal, Paradoxical Outcome, and Tolarian Academy, and it can be cycled if you want.

Having 3 artifacts for Mox Opal is important since you play only 10 lands, and having blue mana can be a problem. I don’t like Chrome Mox at all since it works so poorly with Paradoxical Outcome and it’s card disadvantage. The same goes for Lotus Petal. 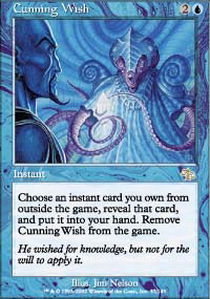 Cunning Wish is nice tech. It happened once that I lost against an Oath deck that boarded in Magus of the Moat, and I didn’t have Swords to Plowshares. I could not have lost if only I had a way to answer it, because I ended up drawing my deck, but my Monks couldn’t get through the Moat.

It’s the same when your opponent has a main-deck Sulfur Elemental. You can kill them with Monastery Mentor, but it’s way harder and some things can go wrong. It also happened that my opponent Extirpated Monastery Mentor after countering it. With Cunning Wish, I could have just gotten Brain Freeze to win the game.

It looks like a win-more card, but it’s just a very versatile 1-of that can get you out of bad situation, such as a main-deck Stony Silence that completely shuts off the deck. Now you are able to answer it with Wish into Disenchant. Stony Silence, Null Rod, and Ethersworn Canonist are annoying cards, along with all the Spheres in Workshop. That’s why you have the 3 sorcery-speed Fragmentize.

This deck is a real delight to play. It can go off on turn 1 often, and even when it doesn’t, it’s still a Mentor deck with cantrips and countermagic!