The best way to use a pack of Magic cards is in a Booster Draft. But sometimes you want to open some booster packs to get the good stuff inside while you don’t have enough time or enough people to start a Draft. What to do then?

One option is to just crack the pack and be done with it. But that’s pretty bland, especially when you’re with other Magic players and have some time to kill.

A popular way to get some extra mileage out of a booster pack is by playing a game of Mini-Master (also known as Pack Wars). In this 2-player casual format, each player opens a single booster pack, adds three copies of each basic land, and plays a game of Magic just like normal with their 30-card library. It’s a fun way to play a game of Magic while maintaining the excitement of opening a new booster.

But there are alternatives, and today I’d like to highlight one of my favorites: Pai Gow Magic. Gerry Thompson recently introduced this variant to me at the World Championship in Boston, and I instantly loved it. He learned the game from Alex Majlaton at Grand Prix Las Vegas, who in turn saw it being played at Pro Tour Nashville by Craig Wescoe. It didn’t have a name then, so Majlaton decided to call it Pai Gow Magic since it involves making piles in a similar way to Pai Gow Poker.

The game is fun and effective at improving your Magic skills. Here’s how it works.

I should mention that there are no “official rules” for this casual format—these are just my rules, and your play group can modify them however you like.

The best way to distribute your booster across 5 piles depends on the cards you open and on your opponent’s strategy, but I’ve found the following process to be useful as a guideline.

Suppose you open the following 15 cards. How would you distribute them across 5 piles of 3 cards each? 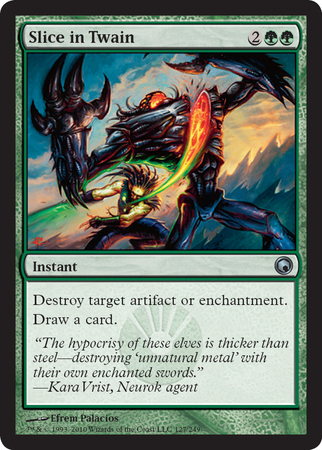 I’d start by identifying the best game-winners, which in this case would be Ancient Brontodon, Vance’s Blasting Cannons, Shapers of Nature, and uh, not sure what else. In terms of synergies, River Heralds’ Boon and Queen’s Commission allow for the most possibilities, so let’s start a pile with each of those as well.

Pile 2 – Encampment Keeper, Queen’s Commission, Fathom Fleet Cutthroat. Tokens and global pump effects are a tried-and-true combo, so it makes sense to put Encampment Keeper and Queen’s Commission together. A raid creature wants to accompany as many other creatures as possible, so adding Fathom Fleet Firebrand is natural. It even works perfectly alongside a chump-attacking 1/1 token.

These decks look reasonable. Given that the remaining three piles will feature one game-winner each, there’s probably no need to give up a pile.

Pile 3 – Ancient Brontodon, Rile, Slice in Twain. A 9/9 trampler should be enormous enough and probably won’t need additional creatures to win the game. I put Slice in Twain here as a nearly dead card that might prove useful in the corner case where my opponent has Pious Interdiction.

Pile 4 – Vance’s Blasting Cannons, Lookout’s Dispersal, Ixalli’s Diviner. You need two spells to flip the enchantment, but they don’t have to be good spells. Lookout’s Dispersal is actually perfect for this—you can just target your second spell, opt to pay, and transform into Spitfire Bastion for a two-turn clock. It’s nice to have at least one defensive creature so that you don’t lose to two 4/4s, which is where Ixalli’s Diviner comes in. Note that it will be a 1/4 because your library is empty.

Pile 5 – Shapers of Nature, Thrash of Raptors, Mountain. The uncommon Merfolk makes every creature arbitrarily large, so it doesn’t need much help and that’s why Mountain ended up here. I added Thrash of Raptors as a backup creature in case my opponent has a single spot removal spell.

Why is this a great format?

It teaches you to focus on synergies: By forcing you to think about possible synergies during deck building, you quickly learn to identify the ones available in the current Limited format. That’s a valuable skill for Team Sealed in particular. After playing several matches of Pai Gow Magic, you’ll immediately recognize the potential of Hijack plus Ruthless Knave, for instance.

It improves your combat math skills: Imagine you cast Tilonalli’s Knight, Frenzied Raptor, and Grazing Whiptail. Your opponent plays Anointed Deacon, Queen’s Commission, and Headwater Sentries, and passes the turn. Given that all information is out in the open, what are your best attacks, and who wins? Seriously, take a moment to work it out.

I believe that the answer is that you shouldn’t attack and that the game will end in a draw, but this question was far from trivial. These board states, which happen often in 3-card games, are excellent for training your mind to quickly work through entire decision trees where you have to think several turns ahead and figure out your opponent’s response for any action you might take.

It’s fun: Because you’re playing quick games with infinite mana, you’ll see a lot of big, whimsical plays that are often loudly enjoyed by a table of Magic enthusiasts. All in all, it’s an excellent way to get some extra fun out of two stray booster packs.

If I convinced you to give this format a try, then challenge me in Lyon this Friday! I’ll be at the spellslinging tables at the Grand Prix venue from 12-4 PM. I’ll have a Standard and Modern deck on me, but I’ll bring some boosters for Pai Gow Magic as well!