Ready to hear about one of the hottest new formats? Well, actually, “new” is probably the worst word to describe it. It’s a format where Birds of Paradise was never reprinted in Ravnica—because Ravnica hasn’t happened yet. It’s a format where cards like Mana Drain and Ancestral Recall are playable in the same deck as Flying Men. Perhaps best of all, it’s a format where you can play Chaos Orb and your friends can’t complain that it isn’t actually legal. Pop open your Time Vaults, folks—this is Old School Magic!

Now, Old School, also known as 93/94 Magic, isn’t exactly new—actually, it has been around since 2007 when some players in Sweden allowed the powerful force of nostalgia to take the wheel. Since then, Old School Magic spread in small pockets throughout Europe and eventually made its way out to the rest of the world. ChannelFireball ran Old School events at some of their Grand Prix events, and the ones I’ve seen have been some of the coolest events I’ve ever had the pleasure to witness.

Getting into Old School Magic isn’t necessarily cheap—many lists play dual lands and full sets of power—but if you’re looking to relive the old days of Magic with a small card pool and a lot of dedicated, innovative deckbuilders, it’s an incredible experience. If you’re ready to start building your deck, here are the rules you’ll need to know.

Some shops and groups use other rules, other legal sets, other banned lists, and so on, but if you’re going to play Old School at a ChannelFireball Grand Prix, this is the rule set they’ll be using—they arrived at it after a lot of discussions with players and a lot of thought about how they could make this format accessible. Of course, if you’re just playing with your friends, I encourage you to use whatever rule set makes the format fun for all of you! If you’d rather your game end in a sudden-death Chaos Orb flipping contest than a draw when you’re playing at home, that’s your prerogative.

In most formats, it’s okay to play other versions of legal cards. In ChannelFireball’s version of Old School, that’s partially true. This is actually one of the biggest points of contention between different versions of Old School—some allow only original printings, some allow things like Collector’s Edition, and some fall somewhere in between. Since this is something that can be divisive, I’ll tell you what they’ve chosen, and then I’ll tell you why.

Reprints of cards from legal sets are allowed if their art matches the art from a version of the card in one of the legal sets listed above and as long as they use the original Magic card frame [Exception: Revised Edition Serendib Efreet is legal]. Collector’s Edition and other gold-bordered cards aren’t allowed, and neither are foils. Here are some examples: 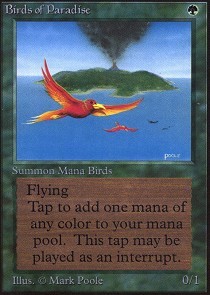 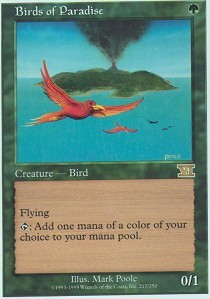 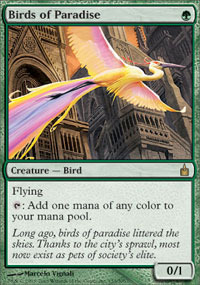 If you want to play Birds of Paradise but all you have is a playset of 6th Edition Birds, that’s fine—they use the same original Mark Poole illustration. Birds from Ravnica, though, have art by Marcelo Vignali, which, while lovely, doesn’t match the Birds in A/B/U—so they’re not legal. 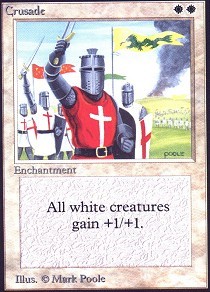 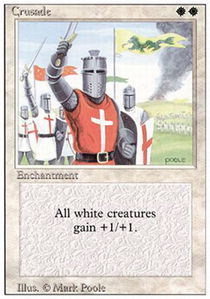 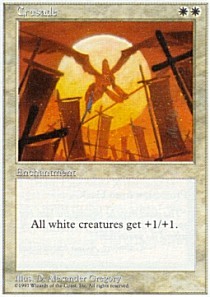 Similarly, playing a Crusade from Revised is fine, but the 5th Edition art is different, so that’s a no-go. 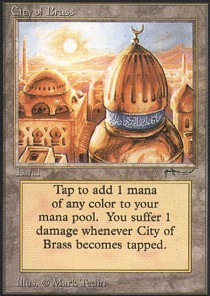 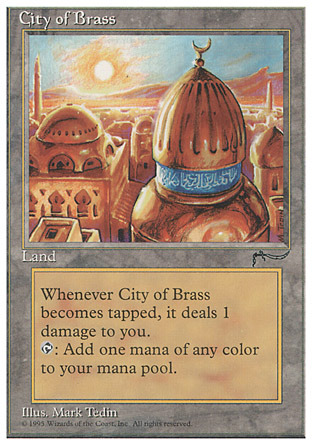 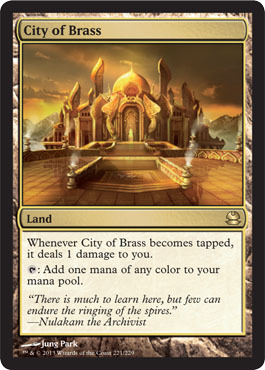 They’ve chosen this particular set of rules for two reasons: First, they want this format to be accessible to more than just a select few who can afford to play cards that exist in extremely low supply. This format is really fun even without the Power 9 or a full set of the restricted cards, and they want to share that fun with anyone who’s willing to play. That leads into my second point: a big part of the fun of this format is the nostalgia factor, and a lot of that comes from the look and feel of the old cards. They want to expand the playability of this format without damaging the aesthetic, and allowing foils, gold-bordered cards, or reprints with different art would damage that aesthetic. Once you get hooked on this format, you might find yourself hunting down black-bordered versions of your reprints, but they want people to have the opportunity to discover their love for the format, and that means creating some wiggle room for people to get their feet in the door.

Of course, some cards just won’t fly in a format like this. In the bad old days, you played for ante, but that doesn’t really work these days. Outside of some very specific and special circumstances, there’s a short banned list to adhere to in Old School events.

You’ll notice that this doesn’t totally match the list of cards in these sets that are banned in Vintage. Some of them will show up on the restricted list, but if you feel like having some fun, you can play 4 copies of Falling Star. It may not be a strategy that wins you tons of games, but sometimes the comedy option is the best option.

That’s pretty much it—except for a few little twists. Chaos Orb is notorious for receiving errata in off-beat formats (like pretty much any Cube I’ve ever played that contains it,) and Old School is no exception. Here’s what Chaos Orb looks like in Old School:

(NB: Players are allowed a “fair flip” on Chaos Orb, which means they can move the targeted card to the center of the table for the flip. Additionally, interfering with a flip – your own, or someone else’s – is not permitted. Apparently there are all kinds of crazy techniques that involve banking the Orb off of another object you’re holding. We’re not having any of that.)

Finally, one quirk of the old rules is back in Old School—mana burn makes a return. For those unfamiliar with the concept, here’s a quick rundown: when unused mana empties from your mana pool at the end of any step or phase, you’ll lose 1 life for each mana that empties this way. Try not to produce more mana than you need, or you could end up in a tough spot!

Other than that, the format uses the rules of present-day Magic. Using an old card pool still works, but the old rules have some problems—this is one of the cases where new is always better.

So what does this format look like in practice? You’ll be happy to know that the decks in Old School are magnificent creations. Here are a few examples. Keep in mind that these examples may not be from events using our rule set—they’re still a good starting point for testing, though!

First, I’ve got Martin Lindström’s “The Deck” (Yes, like Brian Weissman’s “The Deck”) from the 2016 “n00bcon” Top 8. I’ve heard the n00bcon tournament called the “World Championship” of Old School Magic, and there were 3 copies of The Deck in the Top 8. This one made the finals! Here’s the list, once again cribbed from the Old School Magic blog. (This list is based on a bit of a blurry photo—apologies for any errors.)

If you’re interested in control decks, The Deck seems to be one of the best options in the format. With strong removal like Swords to Plowshares and Disenchant, as well as great 1-ofs to dig up with Jayemdae Tomes, The Deck has very little trouble taking the game to a point where it can be finished up with a tidy Fireball. It may take a while, though!

Next up, I’ve got Jonas Rebenius’s WWr (White Weenie splashing red) from the Top 8 of the L.I.G.G., an acronym I personally have yet to decode. Is this what it was like getting tech on Usenet back in the day? Regardless, here’s the list, once again from the Old School MTG blog:

This is not a drill—that really is a Hammerheim. There’s not a lot of plainswalk in the format, so I assume that’s either anti-Goblin King tech or just a really adorable red source. If you’re looking to go to the face from the start and finish up with an Armageddon, this is a great list.

If combo is more your style, perhaps you’ll like MirrorBall! This isn’t the only combo deck in the format, but it does include some cards that ChannelFireball President and CEO Jon Saso wouldn’t forgive me for not shoehorning into this article. You’ll see what I mean when you check out Martin Jordö’s MirrorBall list from the BSK 2015 Top 8. Once again, this list is from the Old School MTG blog, and once again I have no idea what the acronym in the name of the event refers to. Here’s the list:

This list has it all. The combo kill uses Mirror Universe to give away your life total after spending it on Fastbonds, Sylvan Libraries, and Cities of Brass, and then Fireball to finish the job. Of course, you can always count on ChannelFireball combo for all of your Magic needs (see what I did there?) The sideboard is a thing of beauty, with hate cards for every deck that might exist and some that maybe aren’t even real yet. I mean, Sol’kanar! I love it!

If you’re looking for more information about Old School Magic, there are a lot of resources online. Here are a few of them:

This is just the tip of the iceberg—there are more blogs, Facebook groups, and forums that I probably don’t even know about. Heck, there probably really is a Usenet group. Sometimes, Old School is a way of life. If you’ve got more resources for this format, please drop them in the comments—I may add them to the post later. For now, though, start sleeving up your cards from back in the day, and get ready to have some Old School fun!