Today I’ll be taking one final look at three of the new planeswalkers before we finally get our hands on War of the Spark to play. Think of it as three quick spoiler spotlights around cards that aren’t going to be build-arounds, but could instead be useful role-players in Standard. 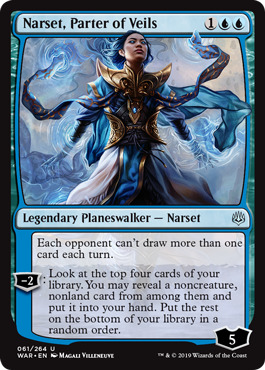 Many people are excited to play with the new Teferi in control mirrors or against Nexus of Fate decks, but I like Narset more in that role. Both disrupt Nexus strategies, but Narset being able to do a good Azcanta, the Sunken Ruin impression is a lot better than either of Teferi’s abilities in that matchup.

For Esper, things are a bit more interesting, since turning off countermagic feels better than only shutting down card draw. So in that context Teferi is a better play for the control versus control matchups. Of course, Narset versus Teferi is also a possibility, and Narset getting a couple of early impulse activations seems spicy. In essence, it comes down to how good you feel the static ability of Teferi is over the static and activated ability on Narset.

Of course, as both are very likely to be sideboard options, it’s difficult to gauge their overall strength until we see them in action. I look forward to seeing if I’m overrating the strength of denying card draw in a world where Search for Azcanta is the go-to alongside Chemister’s Insight. 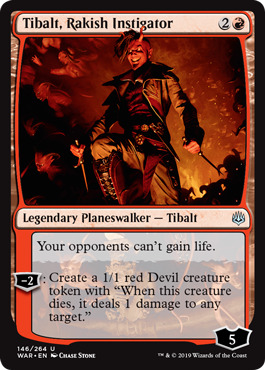 With the release of yet another Tibalt, perhaps he can become more than the punchline to Magic trivia questions. On its face, Tibalt reminds me of the first incarnation, a card that just doesn’t quite do enough to justify itself. But the more I think about the implications the more I believe that at a minimum Tibalt will have a place in BO1 play. Shutting off life gain is huge in matchups against Dovin’s Acuity and Revitalize, and generating blockers that can trade gives Tibalt value in small aggro mirrors. The card is never going to blow your socks off, but being consistently annoying in a variety of matchups is a good reason to try a card out.

For normal Constructed play, I fear Tibalt may just not have a real home when you can side in other cards. Still, if Aristocrats decks are good, I like this as a backup option. Zombies often side into a grindy slower deck against removal-heavy opponents. Tibalt generates two 1/1 pingers and helps devalue some of the usual anti-aggro options available unless they spend a card to deal. 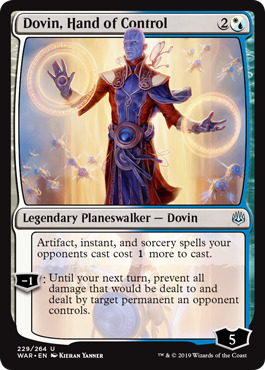 Is this the Dovin that finally breaks the running joke of “unplayable Dovin Baan”? For me the biggest difference here is the 3-mana mark, and the fact that you are not locked into Azorius. You can actually get value out of the activated ability against most Standard strategies while also disrupting a good chunk of decks in the format. Much like how Tithe Taker isn’t going to ruin any decks, Dovin doesn’t single-handedly shut down any strategies, but it can slow them down.

What Dovin does do is make life a lot harder for midrange archetypes. A deck like Drakes? Oh, my 4-mana threat is useless and all my spells that I’ve been throwing out for velocity are suddenly real investments. A midrange Gruul deck? Disrupts any burn getting thrown around while turning off Rekindling Phoenix or any other huge threat. Even against control where you think it wouldn’t matter, Dovin turns off Thief of Sanity for multiple turns while disrupting your opponent.

Of course, the biggest issue is that Dovin doesn’t actually do anything. It 100% supports your other cards. Dovin can’t actually remove a threat, let alone multiple threats; and the longer the game goes on, the less your tax actually matters. So ideally you either have a deck that seeks to end the game reasonably quickly like WW or the aforementioned Drakes deck, or you have ways to cash in copies in the late game with cards like Chemister’s Insight.

I doubt any of these are going to shape Standard, but all of them have the potential to see play and are definitely worth a look in the world of BO1 where they don’t compete with narrower (and often more powerful) sideboard cards.