The Mythic Invitational is around the corner, and I could not feel more honored to be a part of it. This tournament is a defining moment for Magic. Not only are prizes increasing, but the game is reaching more and more people through MTG Arena. Additionally, the game itself is changing. This tournament is the launch point for Magic’s future in esports.

The format for the Mythic Invitational? Duo Standard. Basically this is a combination of best-of-three and best-of-one Standard. You pick two deck lists to compete with, and play a best-of-three set. No sideboards.

My testing in the past has largely been about finding a good sideboard. Most of our testing time was used to slightly tweak known decks, and come up with good sideboard plans.

Testing for best-of-one has been completely different, for a variety of reasons.

I don’t know if there will be a lot of best-of-one Standard events in the future, but I can only assume it’s a possibility, and I’ve learned a lot about how to approach the format. Getting a feel for decks and doing light prep work doesn’t feel like enough. I’ve found it much more difficult to prepare for this event, despite having no sideboards.

The first thing I’ve noticed is that using MTG Arena to test for this event and keeping statistics seems more important than it was in the past. I was fairly lazy about it before, because I had a good intuition for how matchups felt. I could be winning more than 50% of the time with one deck against another, but notice when I got lucky, or my opponent didn’t draw their all important card, or my opponent made a misplay. I could also have gotten unlucky or made the misplay. It works both ways. Rather than document these stats and send them to someone else I’d simply write out my thoughts on the matchup, what felt important, and move on. My teammates trust me as I trust them, and when we had a disagreement on reality, we’d discuss it and try to figure it out. If we couldn’t, we’d go back to the battlefield to get more information.

With best-of-one, there are a lot of variables that make this less effective. MTG Arena has a hand smoothing algorithm of sorts that makes draws more consistent. Because of this, whomever is on the play has an advantage because they’re not stumbling or missing land drops as often. The person on the play usually draws first and last blood. So let’s say I jump into the BO1 queue with my trusty Mono-White Aggro deck. I play for a couple of hours and note to myself how I’m doing in specific matchups. I notice that I’ve played against Mono-Red seven times and that I’m winning a decent amount. I won five out of seven games. Wow, this matchup is decent. I’m casting Venerated Loxodon on turn 3 and their Chainwhirlers aren’t very effective. I finally finish my day of testing and report that white is actually good against red because they can’t beat Venerated Loxodon.

In reality what happened was I was on the play 6 of 7 times, didn’t note that because it’s not something I’m used to keeping track of when testing best-of-three, and realize that I’m a pretty big underdog on the draw, and a lot closer to even on the play. Overall, this is a bad matchup—not a good one—and normal game variance (which there is less of) plus the additional play and draw variance has changed my perception of the matchup because of the small sample I used and my “feel.”

To avoid this, I have to start keeping track of results, and if the sample is large enough, you can ignore the play or draw aspect because it’s likely to be close enough to balanced that you don’t have to worry about it. If you’re going to use a smaller sample like 20 games, it’s important you make sure you’re tracking play and draw to see if your “feel” aligns with reality or if it is possible that being on the play or draw more often biased your feelings in a way that you didn’t notice.

In BO3 Standard, I’m used to decks looking remarkably similar. You see people tuning their Golgari Midrange deck, changing the list from three Cast Downs to two and an Assassin’s Trophy to have an additional planeswalker removal spell for the mirror. This is such a minor change that it doesn’t really impact the decks at a fundamental level. In BO1, archetypes are constantly changing a dozen cards or geared to beat one specific deck. You’ll walk into the queue with your Mono-Red Aggro deck and try to play a few fast games, only to play against Esper with Revitalize and Basilica Bell-Haunt and lose badly. 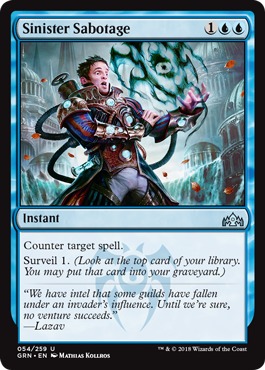 Then next queue you play against Esper with no life gain. Sinister Sabotage over Absorb, even. All of a sudden you’re a big favorite. Players are constantly changing their decks by a lot of cards to gun for specific matchups. This is best-of-one’s version of sideboarding. With different versions of every deck, it’s hard to pinpoint who’s a favorite in a matchup. If someone’s trying to beat your deck, well, they likely can. The tools are available for that. The idea is to try to cover as many bases as possible, and that’s what makes it so tricky. Identifying each archetype on its own isn’t enough. Sometimes you have to create subtypes for these decks like Anti-Red Esper.

The option to submit two different decks is also an interesting dilemma. Surely I could submit two of the same deck if I think something is so good that it’s favored everywhere. But absent that, how should I approach the situation? Should I submit two decks that cover each other’s bases? That is, find two decks that cover each other’s bad matchups as widely as possible, so that in the best-of-three scenario I have a shot at beating any two decks in a set of three? Or is this like choosing Jund in Modern, where I’m playing a deck that has no true good or bad matchups, so my overall win percentage influenced more by when I’m hitting the expected metagame just right? I’d be banking on guessing right, choosing my deck in the third game hoping to hit my good matchup instead of my bad. This feels like it could be a risk. Is it worth it? I’m not sure.

Alternatively, I could try to find some overlap that I think hits the exact metagame correctly, leaving some holes, but have the holes be matchups I’m unlikely to face. This would require an accurate metagame prediction and an extensive knowledge of the matchups. Knowing the matchups is doable, but predicting what other players are going to do in this event is a challenge. We have MPL players participating, and then the other invitees, some of which have limited tournament experience. This is a completely new environment to try to predict a metagame for.

Another thing that happens when preparing on the Arena ladder is that you face aggro decks a lot. Aggressive decks finish games quicker, producing more wins per hour than other decks if the win percentage isn’t substantially worse, so aggro decks are very popular to climb the ladder faster. Since this is the case, the metagame online is potentially warped, creating stronger incentive to beat aggressive decks since you’ll be playing them extremely often. The Invitational is not the ladder. All that matters is raw win percentage and getting a win each and every round. This means the best decks for the ladder aren’t necessarily the best decks for the tournament.

The tournament is a couple of weeks away and while I feel like I’m making slow progress, I haven’t come close to answering all the questions I have about how to approach this tournament yet. I’m not yet at the point of frustration, though I’m sure it’s coming. I’m more amazed with how much I thought I knew going into this event, and how little I feel I know at this point about a Duo Standard tournament. Despite having a nearly identical pool of cards to work from as the last event (RIP Nexus of Fate), this is a completely new format with challenges I hadn’t anticipated until I started to peel the onion.

While it may not be a popular opinion, I enjoy having these new challenges and embrace new ways of playing Magic through Arena. I do wish there was some Limited in this event (Omniscience Draft anyone?), but exploring uncharted areas is what I used to love about the old Pro Tours. Metagames weren’t defined. I couldn’t just pick up a deck and expect it to be fully tuned. I had to work to find something that could work for that weekend, and all that mattered was that weekend. I feel that way again about this Mythic Invitational. Is part of it the increased prizes? Of course. But there’s also a puzzle I feel I can solve, and I want to solve it.

The best part about these events, win or lose, is the aftermath. Finding out how teams approached the testing process, what decks were the correct choices, and seeing how your own theories and practice match up to how the tournament actually played out. What did I do right? What did I do wrong? How do I fix it? There’s going to be a whole lot of this at this event, especially with such a big prize pool.

Magic is not only expanding its player base—the ways we play the game are widening as well. I’ve done my best recently to keep an open mind and encourage myself to play the game in new ways by embracing change and exploring what there is to offer. I’ve yet to be disappointed. We’re always going to be able to play Magic the ways we have, and we should be excited about the new opportunities the game presents us. I’m hoping the Mythic Invitational brings together the community to celebrate what Magic is, and where Magic is going. Come watch, and wish me luck.