Last week, I looked at the cards from Ravnica Allegiance that had the biggest impact at the most recent Modern Grand Prix: Skewer the Critics, Light Up the Stage, and—bigger than both—Pteramander.

This article takes care of all the rest of the new cards that showed up in Toronto, and I’ll tell you exactly how they performed. Be aware that most of them proved very minor offenders, so data and win percentages are rather low. There were a few notable exceptions, though. Speaking of offenders …

Well, you’d better shoot the Deputy, if you want to keep your permanent record straight. Deputy of Detention made an appearance as part of several strategies in Toronto: a few tool box brews, a couple of Death and Taxes lists, some Humans sideboards, and a large number of Spirits main decks. 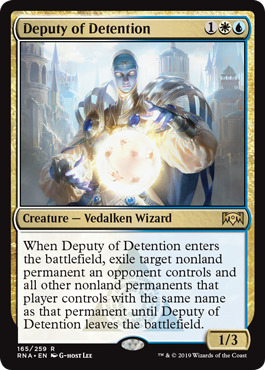 Deputy of Detention is grabbing permanents at a six-finger discount, which identifies this larcenous law enforcement officer as a Vedalken. As such, it doesn’t add to or benefit from any tribe’s synergies. Rattlechains, for example, will never counter a removal spell aimed at Deputy of Detention, and Thalia’s Lieutenant doesn’t count the creature when it comes to giving or receiving counters. Selfless Spirit, on the other hand, is so selfless that it doesn’t limit its altruism to the tribe it belongs to itself, and one Spirits player used Kira, Great Glass-Spinner for additional protection. Spell Queller too will give its new partner some cover.

So it’s no wonder that the Deputy most frequently patrolled the white-blue neighborhood of Ghost Town. About half of Toronto’s Spirits players had some Deputies in their main decks. This is based on a sample of 786 deck lists, which included 33 Spirits, 17 with and 16 without Deputy.

The most successful Spirits deck in the field, the only one to go 12-3, didn’t run Deputy of Detention. But the second most successful and the third and the fourth all did. The prime—as in highest finish—example:

Spirits with Deputy of Detention

Aunt Judy Is a Real Mensch (And So Is Tithe Taker)

Unlike Deputy of Detention, Judith, the Scourge Diva does have a creature type that makes her eligible for benefits. The Judy show also packs quite a punch. If you’ll allow me to engage in highly selective reporting for a second, I’d like to celebrate the fact that, as far as I know, 100% of all Humans players with two copies of the card in their main deck made it to the second day.

Humans with Judith, the Scourge Diva

Everyone who ran two copies of Judith, the Scourge Diva advanced to Day 2. All of them also went 10-5. This much is nothing but the truth. Although it couldn’t be further from the whole truth, because all of them finished in 117th place and all of them were, well, Jacob Altman.

In actual truth, Judith only showed up as the faintest of blips on the radar. In addition to the above, a couple of decks contained one copy, but they didn’t succeed or fail at any rate that allows any kind of inference as to the card’s merits, certainly no conclusion.

Tithe Taker was another card that barely registered and that players rarely registered. I could find a total of seven copies in all of 786 main decks, split between three lists, and three of those copies got stuck in Day 1. One full playset of Tithe Taker, on the other hand, started out 8-0 before falling to 10-5:

4 of 786 players tried to make Prime Speaker Vannifar work. One of them was rewarded with a 7-2 record on Saturday:

For something that showed a lot more promise, we turn to Electrodominance. Five players had four copies of Electrodominance in their main decks. Two tried to Restore Balance. One brewed up a Grishoalbrand variant with Living End. And two advanced to Day 2…

The second player, Anton Ziegler, finished in 170th place with a record of 9-6. Ziegler’s main deck shared four copies each of Curator of Mysteries, Desert Cerodon, Striped Riverwinder, Ancestral Vision, As Foretold, Electrodominance, Living End, and Remand, as well as three Cryptic Command with Archdekin’s version. This is an overlap of 35 nonlands. Both ran 20 lands that differed by a single card: Cascade Bluffs above, and another Island for Ziegler. Ziegler had Nimble Obstructionist, Faerie Macabre, and three Izzet Charm in the flex slots.

A combined record of 19-11 and a sample size of two isn’t exactly what anyone would call dominance or reliable, but it isn’t half bad. To reiterate, the only two players who ran these same 54 main-deck cards both qualified for the second day. For comparison: I don’t know about any traditional Living End players who made the cut.

The Wilderness Claims Another Format (Or Not)

The combination of Wilderness Reclamation and Nexus of Fate turned out to be quite oppressive in Standard. There even was a ban of sorts. You may have heard about that. So it shouldn’t have come as a surprise that people would try to port the strategy to Modern sooner or later.

It took me by surprise anyway when I tallied up Toronto’s deck lists and found a whole group of five players who all ran essentially identical versions. This was quick. The design wasn’t a group effort, though, or at least not this group’s effort. As far as I can tell, it was Magic Online user Ftzz who first popularized the deck with a string of 5-0 finishes in Leagues.

But fear not. Unlike its Standard cousin, the Modern implementation of Reclamation will never take all the turns beginning with its fourth. Instead, it starts off playing fair and happens to be one of the most interactive decks around. Here is the version that finished highest at Grand Prix Toronto:

There’s also no need to worry about Wilderness Reclamation taking over Modern any time soon. Being able to play everything except for the enchantment at instant speed, including mana acceleration in Growth Spiral and a nigh universal double tutor in Mystical Teachings, seems strong. But it didn’t prove strong enough in Toronto. None of the strategy’s followers made it to the second day. Two players went 5-3, and the others did even worse.

Growth Spiral also appears to have brought one old archetype back from the brink of extinction. Blue Scapeshift variants were last seen at the top tables back when Jace, the Mind Sculptor went off the banned list. In Toronto, one such deck made it as far as Table 2. In Round 8. Antonin Legault won to advance to 8-0.

Unfortunately, it went downhill fast from there, and the rest of this evolutionary tree’s growth didn’t spiral out of control either. Four other players combined Scapeshift with blue. All used Growth Spiral. None reached the Sunday rounds.

Light Up the Skewers Again

My article last week included, hidden among lots of other data, the information that five of 18 Mono-Red Phoenix decks made it to the second day. 18 equals 2.3% of the known field, which is the largest metagame share this archetype has ever mustered. Seeing five of them back on Sunday translates to a conversion rate of 27.8%, which is above average and much better than how the deck performed at Grand Prix Oakland in January.

You may recall that Skewer the Critics didn’t improve Burn’s performance appreciably, and that Light Up the Stage even hurt its win percentage. The same wasn’t true at all for Mono-Red Phoenix. All 18 players ran four Skewer and at least three Light Up the Stage. In fact, twelve of them ran the exact same main deck as the top finishers:

Noteworthy too is that the five Day 2 competitors all stuck to this recipe. Variation among them was limited to one guy deviating by three sideboard cards. Rarely do Modern archetypes exhibit such uniformity. Non-blue Phoenix decks didn’t either before the release of Magic‘s latest set. They weren’t even all mono-red.

Now Mono-Red Phoenix is the deck that uses the most new cards at the highest rate and with the best results. What a nice note upon which to end this series. We began this journey to the Modern applications of Ravnica Allegiance with rosy-red colored spectacles on our eyes and we’ve come full circle.