Ah, Smallpox. I’m all too familiar with you. While doing my research I discovered that I’ve covered B/W Smallpox decks in Modern about two other times, both in January, once earlier this year and once in 2016. While I’ve played similar archetypes where Smallpox was the centerpiece, all three decks, including the one I’m going to be looking at today, are quite different.

Most recently, Warren Woodward managed a 12th place finish at Grand Prix Vegas. This was definitely a surprise and has been the most exposure the deck has received… maybe ever! Ever since then, some version of B/W Smallpox has been present in the Magic Online Modern metagame.

While Woodward had great success (Borat voice) with his list, I was more of a fan of some of the variations it spawned. The deck I’m going to be looking at today is a little different. This list was played to a couple of 5-0 League finishes in the hands of Magic Online user Yoshumotto. Take a look.

Now this is a sideboard! Other than having no way to deal with Blood Moon, Ensnaring Bridge, or to gain life, I don’t really have many complaints. The problem is that that is a pretty big complaint. One thing I always suggest is having enough basic lands to cast your spells. As a black-white deck, only 1 Plains and 1 Swamp is just miserable here. If the opponent lands a Blood Moon and you don’t have your 2 basics and your single Anguished Unmaking, these are the spells you can simply never cast: Gideon, Ally of Zendikar, Liliana of the Veil, Never // Return, Smallpox, Damnation, Fulminator Mage, and Leyline of the Void. Also Bloodghast, if they’re not already in the graveyard.

That’s so many cards, although the mana base is something of a double-edged sword. I can see why you don’t want too many basics with such restrictive mana costs—you want a lot of your lands to be dual lands because you have so many double costs. That being the case, the aforementioned Blood Moon scenario still scares me. Let’s see if I can dodge it.

One thing this list was missing compared to the previous lists I’ve played was a form of card advantage. There were so many times in these matches where I was at the mercy of my deck with no cards left. The version I played in 2016 had cards like Myth Realized, Gideon Jura, and Erebos’s Titan, so you can see why that would pique my interest. Vault of the Archangel was another card that kept me in business. The 2017 list had 4 Dark Confidants in it, so both lists had ways to draw cards when they ran out of gas. 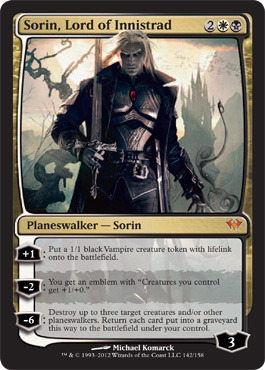 I’m also a bigger fan of Sorin, Lord of Innistrad than I am of Sorin, Solemn Visitor. Being able to make 1/1 lifelinkers every turn to chump block while also adding to his loyalty is huge. While the +1/+0 and lifelink for Solemn Visitor is great, if you have fewer than 3 creatures on board, it’s usually pretty bad. Additionally, making one 2/2 flyer while putting Sorin to 2 loyalty is pretty much a death sentence in this format.

I’m trying to figure out how I ended up with the record I did, aside from me just being terrible that is (definitely an option!). The conclusion I came to is that the deck simply isn’t doing anything better than other decks. Living End has a huge endgame that’s difficult to deal with along with versatile answers like Beast Within. Even that green deck was just more aggressive and focused, and and it wasn’t realistic to hope to draw enough removal for every one of their creatures. Meanwhile, I don’t have many creatures that can trade profitably before taking over the late game. I also drew none of my sideboard cards in either matchup, and I basically had nothing against Burn—I just had to survive until I could gain some life from my single Sorin. Not ideal, as you can imagine.

Anyway, that’s all I’ve got! Thanks a ton and I’ll catch you later!