The happiest time of the year is here! That’s right, the Vintage/Holiday Cube is on MTGO, and we all have the privilege of enjoying the purest form of Magic. Today, I’m going to give you a detailed look on how to Cube for fun and profit (mostly fun, especially if you draft Storm). Hopefully, this reduces the barrier to entry some, and makes what is a very daunting format a little less daunting, because Cube is honestly the best once you get into it. I know it can be hard to jump in, but that’s what I’m here for!

First, what is Cube?

A Cube is a set of draftable cards, and can be literally anything. It can include Unstable cards, all commons, only cards from Innistrad, 360 cards, 720, 2,000—whatever you want. Usually, Cubes don’t have duplicates, but that’s not a hard and fast rule either. If you’re making your own Cube, go nuts, and do whatever you think sounds best.

The Vintage Cube is made up of 1-ofs (though there are cards that are functional duplicates, with different names), and as the name suggests, draws from all cards legal in Vintage. The current list can be found here.

In order to master the Cube, you must become the Cube.

OK, that sentence doesn’t mean anything, but it is important to know how Cube works. This isn’t Draft, as such. The reason that everyone’s first Cube Draft (literally everyone) is something akin to Green-Black Goodstuff is because if you’ve drafted normal sets, then you draft Cube, you immediately just take “good removal” and “good creatures.” What you invariably end up with is Green-Black Garbo, as it’s commonly known. Cube is a Draft-Constructed hybrid, and to be successful in it, you need to know what the archetypes are and how to draft them. All the picks should point in a particular direction, because you are crafting an archetype, not just assembling a pile of good cards.

There are two points to really understand Cube drafting:

I’m going to tackle the first part today, and my next article will cover the decks. At the end, hopefully you’ll be a Cube hero, and if this gets anyone to try Cube who otherwise wouldn’t have, I’ll call it a success. Let’s get to it! 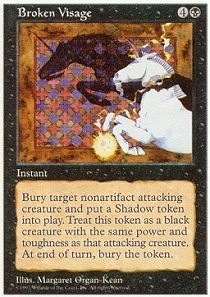 First, let’s talk broken. This is the fun part, the part everyone loves arguing about, and the part where you imagine always opening Black Lotus. I wonder what that’s like? I’m going to start with tier 0 cards, which are cards that you never pass except when you open multiple tier 0 cards. I have an order of these, but honestly it doesn’t matter that much, as long as we all agree that they are busted. Still, my order is objectively right, so you should use it.

The combination of Storm being actually good and how much I’ve liked mono-color decks moves Lotus to the top of my list, but like I said, if you take Sol Ring over Lotus, or Library over Mox Sapphire, you’ll be fine. Wrong, but fine. I am also really high on Mana Drain, because I find that it leads to a resounding victory so often.

After this short list of Magic’s greatest hits, I’ve got a few groups of cards. This isn’t in any strict order, because there are usually multiple viable paths and because pick orders change once you have cards in your pile. These also aren’t exhaustive lists, because the Cube is so big, but this should give you a good sense of what I mean (and in the case of the engine cards, I did a scan of the Cube, and these are what stood out). 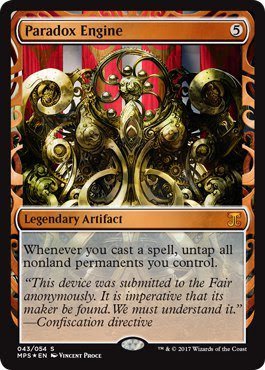 Here are the powerful engine cards I like taking early:

I’ll talk about the decks these go into in my next article, but these are cards worth building around and cards that give you a specific (and powerful) direction. The downside to taking these is that they can end up in your sideboard if you don’t draft their archetypes, so I usually prefer to start with cards from the next category when given the option. 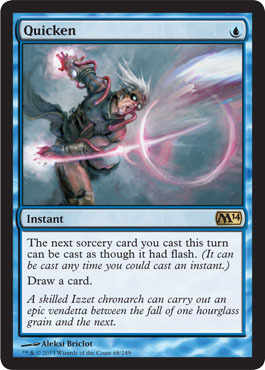 The next group of cards are the cheap cards that go into multiple archetypes. These are what I think of when I think of “good cards” in Cube—they aren’t broken, they aren’t engine cards, but they are cards I’m always happy to add to my deck.

This list is but a sampling because there are so many cards that fit into this category. The idea is to find cards that are efficient, powerful, and flexible. These cards go into many kinds of decks, and are effective at either furthering your game plan (via mana ramp, card filtering) or disrupting the opponent’s (counterspells, hand disruption). Note that creature removal and threats are not in this list. That’s intentional, and that’s one of the big wins you can get from this article. You want your threats to be whatever engine makes your deck work, and you really should devote very few slots to strict creature removal, because this Cube is not run on creatures.

Here are cards I’m happy taking early for their power and flexibility:

The list goes on, but the key attributes are:

Early in the Draft, knowing how to stay open without sacrificing power is really important, and lets you see the 5th pick Sneak Attack, Entomb, Frantic Search, or Natural Order and take it without throwing your first four picks in the garbage.

Between these descriptions and the example list above, you should be well on your way to identifying cards like this when you come across them. 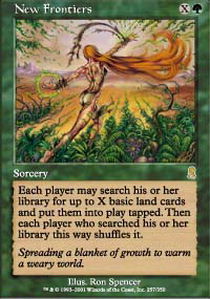 Next, we have mana. Cube decks live and die based on their mana, and if you’ve seen me draft, I have no qualms about slamming Volcanic Island or Flooded Strand first-pick. How you want to go about constructing a Cube mana base is tricky because there isn’t a pick order per se—instead, you want to build a blend of the options, because the way dual lands and fetchlands work together is a thing of beauty. 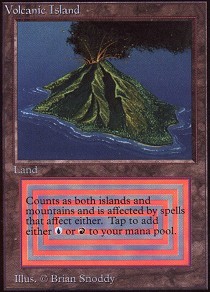 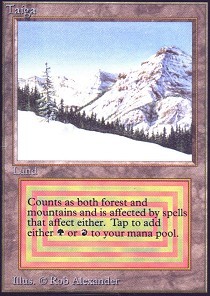 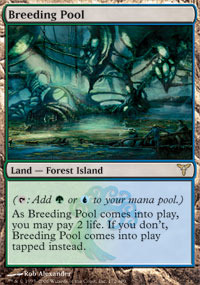 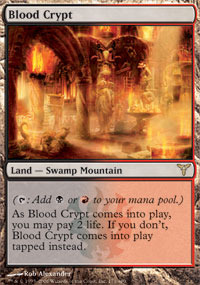 For our purposes, Alpha duals like Volcanic Island (yes, I know) and Ravnica shocklands like Steam Vents are exactly the same. Clearly you’d rather have the better version, but it doesn’t matter (and I’m just going to use the Alpha names from now on, but I mean both).

The goal is to maximize how good your fetchlands are, and that starts with dual lands. P1P1, the power ranking goes:

I’d pick the blue duals early, because blue is the best color in the Cube, and would ideally not pick the bottom six all that early.

Once again, there’s a gap between blue and nonblue. It is worth noting that the difference is smaller here, because which fetches you want varies wildly based on which duals you have. If you are blue-red and have Tundra, then Arid Mesa becomes better than Polluted Delta.

The Ideal Mana Base

Here’s where it gets tricky. You want to start with duals and add fetches, but you have to know how to combine them. As with the above example, you’re looking for the minimum amount of duals that covers all your colors and all fetches from there on out. The reason is that if you have Underground Sea in your blue-black-green deck, Misty Rainforest is now a tri-land. It gets blue, green, or black mana. For a 2-color deck, the dual of your colors is always the highest priority, followed simply by fetchlands that get it (Volcanic Island, then any blue or red fetch). In a 3+ color deck, you want duals that touch all your colors, then fetches that get those, plus other colors. For example, in blue-black-red, Volcanic Island plus Polluted Delta is better than Volcanic Island plus Scalding Tarn. 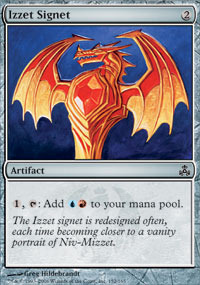 These are great early plays, and they fix your mana. I tend to put them just under the dual/fetch engine in importance, though if you have Tinker or an artifact theme, or lack early interaction, they become critical. Signets are great, and even half on-color ones are good.

Getting the hang of dual + fetch is the most important, and past that I just pick up lands like fastlands (Spirebluff Canal) or creaturelands (Celestial Colonnade) when I see them late. They aren’t high priority, though they do help your mana base, so they are better than marginal playables or sideboard cards.

Here’s a sample Jeskai mana base that I would say is good for a deck with lots of blue and red cards, splashing something like a Restoration Angel and an Armageddon. 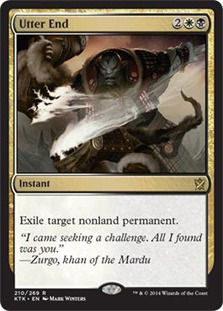 Next in the hierarchy are the finishers. These are cards capable of ending the game—your win conditions—but ones that aren’t necessarily engine cards you build around. Here are some examples:

These sometimes edge into reanimation territory, but I mostly mean cards that cost 5-7 mana, like the Titans. Near the end of the Draft, if you don’t have them, they move up in importance, but I start out by aggressively bypassing them in favor of broken cards, engine cards, cheap cards, and lands. It’s just so easy to win the game once you have disrupted the opponent or accelerated to 6 mana, so I tend to not worry about how I’m closing. Additionally, synergy decks don’t really need these if they have their own finishers, so Sneak Attack, Reanimator, Storm, etc., aren’t in the market for random Titans all that often. 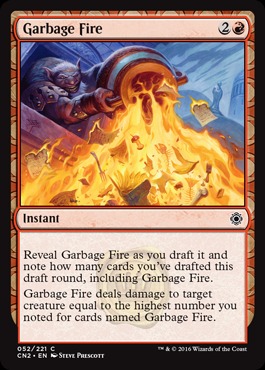 If you take nothing away from this article but the ability to identify the cards that largely suck, you will see a nice win percentage bump. There is a large class of cards that are not good, and trick people into playing them. These usually aren’t cheap, but don’t have the endgame power of a Titan. They aren’t synergistic, or have a synergy that doesn’t really win the game. They may also be narrow, such as removal. They are also disproportionally black or white, since those colors lend themselves more to this kind of nonsense (and because mono-red and mono-green have fewer random midrange cards).

Here are some winners:

Elspeth, Knight-Errant (and most non-Jace non-Garruk planeswalkers)
Angel of Invention
Master of the Wild Hunt
Magus of the Will
Linvala, the Preserver
God-Pharaoh’s Gift
Brimaz, King of Oreskos
Desecration Demon
Mizzium Mortars

Basically, cards that aren’t fast or powerful end up in the middle, which is a really bad place to be. Cube is about going big or being fast, and these cards don’t do either. I also will admit that Mono-White Aggro is actually not bad, but the midrange white cards still suck.

To sum things up:

Cube is a journey, but it’s a fun one, and hopefully these guidelines can help you start getting the hang of it. Next I’ll be diving into the archetypes, since once you learn those, you will be a certified Cube Master.

If you have questions about Cube, and which cards belong in which category, shoot me a comment here or on Twitter (@lsv) and I’ll be glad to help. If you have to ask if it’s crap, it probably is, but I’m happy to say why!