Magic sets these days contain plenty of cards that are interesting to analyze from a mathematical standpoint. Eldritch Moon is no exception. This week, I’ll go over Deploy the Gatewatch and Lupine Prototype, and next week I’ll discuss Liliana, the Last Hope and several other cards. 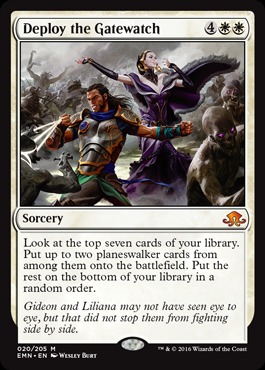 This new Collected Company for planeswalkers has spawned quite a bit of discussion. Collected Company is a format-defining card, but Deploy the Gatewatch has a bunch of downsides—it costs 2 mana more, hits a card type that decks typically aren’t filled with, and can run into the rule that you can’t have 2 planeswalkers of the same type on the battlefield at the same time. In exchange, however, there is no mana cost restriction on the permanents you can hit and you get to look at 7 rather than 6 cards.

What are the probabilities for a Standard deck?

When the card was revealed, I Tweeted out a picture of a simple spreadsheet.

But once you go up to 20 planeswalkers, the numbers get more exciting, with the probability of a complete miss falling below 5% and the expected number of planeswalker hits rising above 1.7. These numbers are similar to a Collected Company in a deck with 23 creatures.

When I Tweeted out that picture, I received requests for a similar table for Commander decks, so here you go. The table starts at the number of planeswalkers required for a 50%-or-higher probability of hitting 2 planeswalkers.

Based on this table, I would recommend at least 33 planeswalkers for regular Commander decks with Deploy the Gatewatch. But if your deck contains a lot of Brainstorm-style cards that aim to cheat Nicol Bolas and/or Ugin to the top of your deck, then you could do with less, although I would still be hesitant to go below 27.

What’s the impact of the planeswalker rule?

So far, I haven’t explored the adverse impact of the planeswalker rule that prevents you from having 2 planeswalkers of the same type in play simultaneously. To do that, you have to know how many 1-ofs, 2-ofs, 3-ofs, and 4-ofs you have of each planeswalker. In other words, you need to consider a particular deck composition. Since the issue is more prevalent with 60-card decks than with 99-card decks, I’ll consider the following Standard list.

This Abzan deck with a small red splash contains 22 planeswalkers, and I think that’s as far as you can realistically push it. This deck can surely be improved—for example, I could see a few Tamiyo or Nahiri instead of Liliana if you can fix the mana curve somehow. But the main purpose of this 22-planeswalker deck is to fix a deck composition that allows you to estimate the impact of the planeswalker rule.

For that, you can use the following formula, assuming that the board is empty when you cast Deploy the Gatewatch.

The results for my 22-planeswalker deck are as follows:

Note: The numbers get worse if you take into account the possibility that Deploy the Gatewatch hits a planeswalker you already have on the battlefield. The likelihood of that depends on the matchup, on how much your opponent is pressuring your planeswalkers, and on how you sequence your planeswalkers, so I left it outside the scope of my calculation, but it is worth pointing out.

For comparison, if you ignore the planeswalker rule, as in the first spreadsheet picture, then you have the following probabilities:

How Much Mana Can You Expect to Hit for this 4-Color Planeswalker Deck?

The result of this calculation is that Deploy the Gatewatch will hit 7.78 mana worth of unique planeswalkers in expectation. That is pretty good. In the long term, Collected Company tends to break close to even on mana (it’s 4.3 mana in a deck with four 1-drops, ten 2-drops, and ten 3-drops) but Deploy the Gatewatch gets you ahead by almost 2 free mana. That’s value!

As I showed, in the right deck you can achieve a level of consistency where Deploy the Gatewatch is worth the 6-mana investment. The problem, however, is that a Standard deck with at least 22 planeswalkers just doesn’t seem very good right now. The 4-color deck I built as a reference, for example, doesn’t look that impressive to me. It’s hard to obtain an acceptable mana curve, consistent mana base, and synergy with an all-planeswalker deck. It’s much harder than with an all-creature deck, at least.