I remember the first time I saw Decimate, back in Odyssey. It was one of the coolest cards I’d ever seen, but I soon learned that actually casting it was pretty tricky. 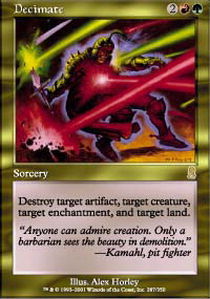 Now, thanks to some clever (or perhaps evil) templating, you can’t cast Decimate unless you have all the targets, so there needs to be a land, artifact, enchantment, and creature all in play. As such, this card ended up being more of a footnote than an impactful card, and my fledgling Magic: The Gathering player self soon moved on.

Cut to today, and Decimate is back, but it’s better than ever. Take a look at Casualties of War, care of Wizards of the Coast:

Not only has this been updated to include planeswalkers, it now doesn’t require all the types to be in play in order to be cast. “One or more” means you can just choose the modes that are legal, and you don’t have to worry about there being an enchantment in play to cast this. That’s a huge upgrade, and this card looks like it will do a lot of good work come Standard.

If you can frequently nab three things with this, you are getting some really good value, and you’re guaranteed a land no matter what. That means anyone playing artifacts/enchantments gets hit hard, and killing a creature plus a planeswalker is not difficult to envision.

Casualties of War is a powerful and flexible removal spell, and can help decks like Golgari or Sultai deal with opposing threats regardless of what they are. It’s also got potential in best-of-one, as this is wide-ranging enough that it can find targets no matter what. Of course, a 6-drop is still soft to aggro decks, but having this on top of your curve does answer anything from Teferi to Experimental Frenzy, and picks up extra value in the process.

This set looks exciting, and judging from the movie trailer, there will be casualties of war aplenty.