The first thing to note is that you are very far ahead. No matter what play you make (assuming you aren’t doing things like Lightning Bolting yourself in the face), you are a heavy favorite to win this game. That doesn’t justify making a bad play, but I just want to be clear that this is a matter of picking between favorable paths. That being said, a big weakness many players have is to play poorly when ahead, which is not a good habit. It turns out that losing even just 5 percentage point from games you are 90% to win is still a very bad thing, so let’s try and avoid that here.

Flashing back Kolaghan’s Command seems vastly superior to any of the other options, so I’m going to immediately dismiss those. Saving time when making a complex decision is important, and there’s no need to examine those possibilities.

I start by deciding that attacking is good. If the Memnite blocks either creature, we are happy, and putting the opponent on a two-turn clock if they don’t block is also great. Again, there are a lot of lines here, and I can’t really justify not attacking. This example is illustrative of how I tend to go about solving situations that have too many outputs to consider, because in a real game, you can’t examine every decision tree. It’s very clear that attacking is great (at least to me), given that it’s good if the opponent blocks or doesn’t block, and keeping Gurmag Angler back does not seem good at all. Delver attacking is less exciting, but still good given that you are happy to trade with it on the attack and have Snapcaster as a blocker if the opponent attacks.

Given that we are attacking, what can happen from here?

If the opponent blocks Delver, great. You just pass, the opponent goes to 5, and you can then Snapcaster Command to kill Ornithopter and force a discard of the Champion. The opponent can’t cast a topdecked Champion (no metalcraft), and any other creature they draw has to chump Angler.

If the opponent blocks Angler, you can send a lot of their cards to the graveyard.

One option is to deal 2 to the Ornithopter and make the opponent discard. Plating shrinks, and the Angler survives. The opponent is left with Plating, Mox, and the Glimmervoids. The problem with this line is that the opponent can draw a flier, and if you miss on your Delver flip, you can only attack them to 1, after which you may die to Plating.

Another option is to destroy Plating and cause them to discard. This leaves Ornithopter in play, and is now vulnerable to a topdecked Plating or even Ravager (you don’t die in one hit, but if you miss on Delver you die in two).

Both these scenarios leave you in good shape, but I think we can do better.

Destroying the Plating and dealing 2 to the Ornithopter leaves the opponent with just Mox and two Glimmervoids, so they can’t cast Etched Champion. Even if they do draw a land to cast it, unless it’s Darksteel Citadel, they won’t have metalcraft. At that point you can still kill them with Delver in a few hits if it flips, and they need to draw Plating or Ravager after drawing exactly Darksteel Citadel, which is much less likely than the previous examples.

If the opponent takes it and goes to 4, you have some options.

You can Command to make them discard the Champion and kill the Plating, but that puts you in the same scenario as above, where a topdecked Plating or Ravager (or even Etched Champion) plus a miss on Delver puts you in bad shape.

You can Command to make them discard and kill Ornithopter, but that loses straight-up to a topdecked Etched Champion (even if Delver flips).

The best plan is to just pass. 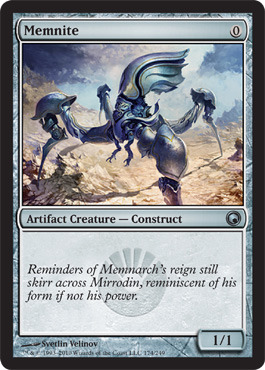 If the opponent attacks with Memnite, you have the classic Grixis play at your disposal (I did this a few times during the last GP). Cast Snapcaster, and target Command. Block with Snapcaster, and just let it die. You then have the option to flash back Command and get back Snapcaster, which in this case should be accompanied by dealing 2 to the opponent. On your turn, you get to Snapcaster + Lightning Bolt them for the win.

If the opponent draws a land, they may play Champion, then equip Ornithopter and just attack with that. In that case, you can kill Plating and Memnite, which puts the opponent dead to a Delver flip and leaves you in fine shape even if you miss on Delver. You get to attack the opponent down to 1 with your creatures, though you do die to Plating. This is the least good result of this line of plays, but it requires the opponent to not block, and to draw a land, and you to miss on Delver, followed by a Plating/Ravager topdeck. That seems like a lot that has to go wrong, certainly more than some of the other options.

In order to bolster my claim that this is the play, I present Frank Karsten’s post. I assume Frank ran the numbers, and that they told him this was the mathematically correct play, so it’s pretty hard to argue against it.

I’ll be back soon with another play, though I can’t promise it will have quite as many decision trees.

If you think you’ve got a play that can stump me or the readers, send it to [email protected] If I feature your submission, you’ll win $25 store credit at ChannelFireball.com*!