We haven’t had a dedicated control deck in Standard for quite some time, not since our friends Pearl Lake Ancient and Ugin, the Spirit Dragon rotated. I blame cards like Collected Company, providing creature-based decks with card advantage and ways to get around 1-for-1 removal and counterspells.

Kaladesh, however, offers a number of cards that could rejuvenate U/W Control in Standard. Today I want to look at some of the blue and white cards that could fit into the archetype (Keep in mind this is being submitted before the entire set has been revealed!).

Authority of the Consuls

This is an extremely useful card for 1 mana. It reminds me a lot of Blind Obedience from Gatecrash… only, without the life loss, the additional mana costs, and the tapping of artifacts. But let’s be real, the creatures entering tapped was the relevant part anyway. While cards like this are terrible topdecks, having one in your opening hand could be huge against aggressive decks. This might specifically be a sideboard card, but I have a strong feeling it will see play somewhere. Even in aggressive mirror matches, disabling blockers while pulling ahead in life could be great. 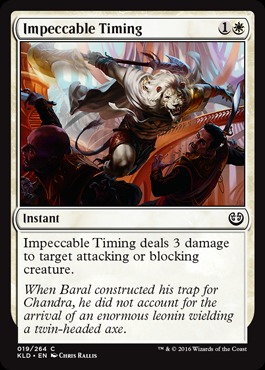 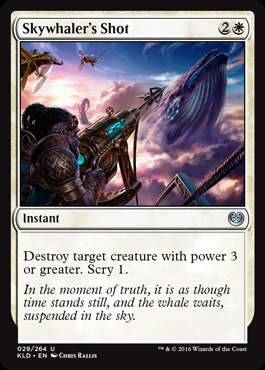 While fairly innocuous, I think both of these cards are great. Destroying a creature at instant speed with power 3 or greater is open ended—it hits a lot of creatures and nearly all of the relevant Vehicles. The scry is also a nice perk. Unlike Puncturing Light, Impeccable Timing is a much better option. Aggressive Constructed creatures usually have a lower toughness than power, so damage is a little more effective—think of new cards like Fleetwheel Cruiser or Ovalchase Dragster. For 2 mana this is a good deal, and is going to kill practically everything you want it to in the early (and sometimes even late) game, including p/t-altered Wandering Fumaroles! Cause come on, lands don’t need to be attacking people. Ain’t nobody got time for that. 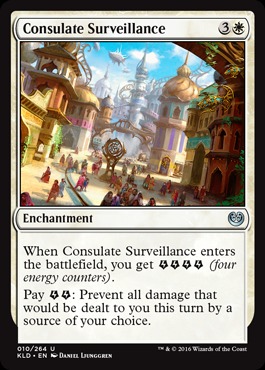 Another useful enchantment that could have even broader applications once we see all the cards that can effectively utilize or create energy. For an artifact set, there sure are a lot of useful enchantments. I think the only downside of this card is that it’s competing with a lot of other strong cards at 4 mana (Gideon, Ally of Zendikar; Dovin Baan; 4-mana counterspells like Summary Dismissal and Insidious Will).

One card it reminds me of a lot is Martial Law from Return to Ravnica. It always felt like a great control card, forcing your opponent to overcommit into a board wipe, but it never really caught on. I think the difference here, aside from being a completely different format, is that energy could be a very real strategy. We’ll have to spend some time looking at which shell is the most promising for control before we know.

People have been comparing this guy to Vampire Nighthawk. Let’s be quite clear: Nighthawk he is not. Deathtouch is significantly better than vigilance, and being able to take down something like a Grave Titan in combat (or nowadays a Gearhulk) is huge. That being said, a 2/3 flyer with lifelink and vigilance for 3 mana is still pretty great. It can crash into a lot of the good Spirits all day long and still keep his defenses up for blocking. And just like Vampire Nighthawk, the life gain can really add up, especially if a card like Aetherflux Reservoir actually becomes a thing. (Just kidding.) (Or am I?) (No, I am.) (…kind of.)

Remember that thing I was saying about a ton of good enchantments in the artifact block? That’s what I think of when I think of Glint-Nest Crane. You know what else I think of? Cards like Augur of Bolas and Sea Gate Oracle, two cards that saw a good deal of Constructed play. A couple differences are that the Crane only costs 2 mana (instead of 3, like Oracle), it looks at the top 4 cards rather than 3, and it has flying.

Granted, it would be a lot easier to find an instant or sorcery in a control deck than it will be to find an artifact, but it all depends on what the options are and how you build your deck. If Kaladesh gives us the tools, or maybe even Aether Revolt, and we’re able to put together a control shell with a ton of artifacts in it, this guy is an MVP.

I haven’t actually read what anyone does or doesn’t think of Dovin Baan yet, but I think he’s fantastic. His +1 ability is simply Jace, Telepath Unbound, only better. Much better in fact. So just like Jace, he does indeed protect himself. His -1 ability is… well, also Jace, but Jace Beleren. They both draw a card for -1, but Dovin actually gains 2 life as well. This can be extremely relevant in certain matchups. While unlikely to consistently activate, his Static Orb ultimate also seems pretty powerful.

While I think Chandra and Nissa might be more powerful, I think Dovin Baan is a solid utility planeswalker and I would welcome a number of copies in control or midrange decks. The only downside I see with Dovin is that he’s competing with Gideon, Ally of Zendikar for 4-mana planeswalker, but I do believe they could each fit into two entirely different decks.

Ultimately it looks like control decks have a ton of new tools, and they might also make us question the best ways to build them. It doesn’t seem like it will be as straightforward as it might have been in the past, what with energy and artifacts to take into consideration. Hopefully, I’ve given you guys some things to consider. Let me know if you see any sweet cards from Kaladesh that would fit right into a new control deck.

Thanks for reading, and I’ll catch ya later!