I downloaded Magic: The Gathering Arena after some much needed sleep following the marathon of stand-by flights that was Grand Prix Denver. Arena has been out for a bit, but there’s a reason for my tardiness to the party:

I’ve always viewed playing MTGO as homework. I liked school, so homework isn’t necessarily a bad thing, but I wouldn’t describe MTGO as a fun program to use. MTGO is a useful tool for me to practice for an event, but to say I enjoy using it would be a stretch.

Over the years, the obvious shortcomings of MTGO have ingrained the idea that Magic doesn’t translate well to an interactive, online platform. So when I heard about Arena, I assumed it was just MTGO with animation. I never gave it a chance. Also, the fact that Arena only includes Standard-legal sets wasn’t a big selling point for an Eternal enthusiast.

The reason I downloaded Arena was coincidental. In Denver, I mentioned finally being set up to Twitch stream. A few people suggested I look at Arena since it has been getting lots of views. Based on their suggestion, I downloaded it and have been nothing but beyond impressed with the system.

I don’t intend to be gratuitous in speaking badly of MTGO. I do it to illustrate a point that I hope will resonate with readers who share my aversion to playing Magic on a computer—Arena fixes a lot of the issues I don’t like about playing online and creates a more fluid and engaging play experience.

I’ve played Magic since 1995 but have zero experience with online gaming outside of MTG. I retired from video games after the SNES when I decided to buy Magic booster packs instead of a Nintendo 64. I regret nothing!

With that said, I found the startup tutorial useful. I know the basics of Magic, but a quick walkthrough of spellcasting and combat allowed me to hit the ground running once I was on my own.

The gameplay is intuitive and the graphics are high quality. I don’t necessarily need to see cards smash into each other and blow up during combat, but to be honest it’s kind of cool. I enjoy seeing new animations. I was lucky enough to rare draft a Vraska, and she talks infinite smack when she enters the battlefield or activates. I’m pretty sure she’d get an unsportsmanlike conduct at a real event. It’s an example of Arena exceeding expectations, which is something I’ve never encountered while playing online Magic before.

It’s also difficult to make manual mistakes in Arena since you are dragging arrows to connect a spell, ability, or blocker with its desired target(s). It’s very clear what is about to happen before you hit submit and thus there are fewer opportunities to make accidental mistakes. I love the fact that I’m spending more time and mental energy on playing the game than worrying about the many opportunities I have to make a mistake by misclicking.

Pros and Cons of a New Look

An upgraded gameplay system isn’t the only major departure Arena makes from MTGO. The cards themselves are no longer redeemable for paper copies in Arena. Instead, Arena opts for a system of earning and crafting cards through mechanisms such as drafting, crafting, and daily rewards.

The biggest downside of Arena’s system is that you can’t actually make money selling, redeeming, or trading cards or tickets. The biggest upside is that you’ll never have to deal with a bot! I’ve never played online to grind a profit. I primarily use online play to practice and prepare. I’m typically lucky if I can get through a full Draft without a misclick, so I like the upside more than I dislike the downside.

Also, because the cards themselves have no intrinsic redeemable value it costs much less to “do a bunch of Drafts” on Arena. It’s easy to chain one Draft into many since you only need to go 6-2 in games to come out ahead. Also, keep in mind that doing the daily tasks generates gold, which can be redeemed for Drafts.

The play experience is different. In particular, a match consists of just one game. There are pros and cons. The biggest con is that you don’t get to experience sideboard games. The biggest pro is that you don’t have to spend a long chunk of time playing against the same deck for an entire match. It’s easier to sit down and jam one quick game between doing things on a busy day.

Getting Started with Open Play

Every Arena collection begins with five mono-colored decks and a bunch of ETB tapped duals. You can play these decks “as-is” or customize them. I immediately built an Abzan deck using the best cards from three of my five decks and my duals to fix the mana.

As you continue to play there are tons of rewards to be unlocked, and free cards and product to be earned and added to your brews. You can also earn new and more powerful precons to build around. The precons include powerful rares and mythics like Vraska’s Contempt and Carnage Tyrant and are helpful boosts towards building a collection. 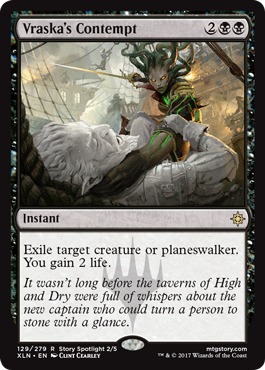 Arena pairs you against other players who are in the same boat as you with regard to their rank, which means that you play opponents with similarly powered decks. As I’ve been drafting and winning rewards, I’ve been able to upgrade my humble Abzan deck into a formidable Golgari Midrange deck. I’ve still got a ways to go before this deck is Standard competitive, but I’m enjoying the process of leveling it up one card at a time:

Legend of the Chupacabra

I opened a Ravenous Chupacabra as a reward and it was so obviously the best card in my deck that I decided to use three uncommon wild cards to complete my playset. I’ve found that “managing resources” and trying to get the most upgrade for my investment is a fun subgame.

There’s also a metagame at the lower tier, which is kind of neat. There’s a lot of B/W Vampire and U/G Merfolk (since those are two of the most powerful preconstructed decks). I’ve taken advantage of the fact that aggro is so good in the low level metagame by building a sweet midrange deck to level up and reap daily rewards.

I considered dumping money into the game to have everything, but I’m enjoying the level up process so much that I decided to take it easy. Also, I like the fact that Arena can be played without actually having to spend money if you are willing to level your account up over time.

Arena reminds me of when I started playing back in middle school. In particular, the aspect of buying a new pack and adding the best cards to my decks.

I’m really happy with the direction Magic has been going lately and I’m a big fan of Arena. The only issue I have with the product is that it doesn’t include older cards and sets, but I hope that is an avenue Arena will explore in the future. If not, I’m content to explore Standard and enjoy leveling up my character.

I think Wizards really hit a home run with this offering. It’s a lot of fun and I highly suggest downloading it and giving it a try for yourself. Or, feel free to drop in on me on Twitch to get a taste of what it’s like. I’ll be online drafting and leveling up my brews all week long.