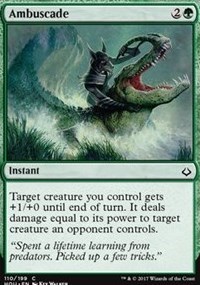 It feels like green gets half fight cards and half bully cards, where the target doesn’t fight back. Ambuscade fits into the latter category, which makes it much more powerful. The most common case for this is that you kill one of their creatures and deal an extra point to the opponent, but sometimes you’ll set up your 3/3 trading for their 4/4 while eating another 4/4, and that’ll be a big game. 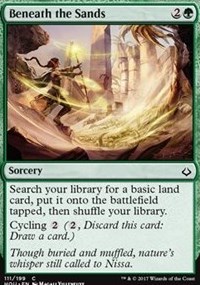 I get that you can cycle this when you have enough lands, but a card that’s inefficient to cast or cycle isn’t one I’m happy to play. In a 3-color ramp deck, I can get behind this, but I’d avoid it otherwise. 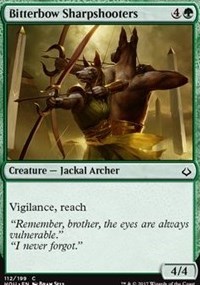 I like cards that can play both sides of the court, and Bitterbow Sharpshooters does a good job on either offense or defense. Solid stats with two good keywords is a recipe for success, even if you don’t need to prioritize 5-drops all that much. 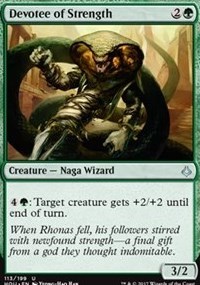 This messes up combat significantly for the opponent, and is a strong play on turn 3 or turn 9. That’s a good deal for 3 mana, and I’m glad to play this in any green deck, regardless of my level of aggression. 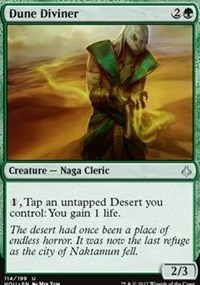 If you have a couple of Deserts, this is a mediocre blocker that can gain you a life or two each turn (at the cost of essentially 2 mana per). That’s not inspiring even when it works, and makes this a card I would only play if I needed a curve-filler. 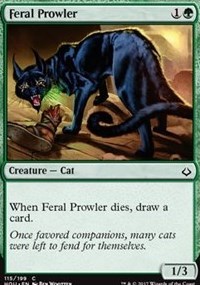 This isn’t the best in beatdown, but it blocks well and is annoying against any deck trying to attack on the ground. While I don’t think I am going to cut this very often, I could see green decks that would. 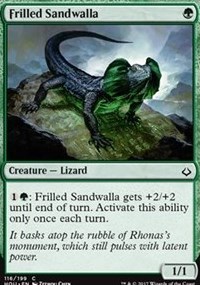 I was going to say that this is at its best in a no-frills aggro deck, but that may come off kind of confusing. Either way, this is a legit threat in a beatdown deck and a poor addition to midrange or control. You don’t want to leave mana up and have this be a blocker—you want to be attacking and pumping this or threatening to do so. It has enough stats to be worth it, though it also isn’t the kind of card you want in great quantities, because it does tax your mana. 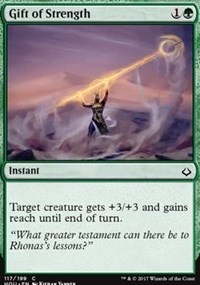 This is a perfectly fine combat trick, and every now and then you’ll get to ambush a flyer. 2 mana for +3/+3 is not efficient or powerful enough to make me excited, but it is good enough to fill out a deck if you need tricks. 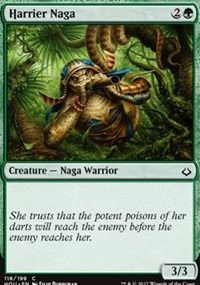 There’s absolutely nothing wrong with this card, and I expect to play it as a matter of course. It fits well into aggro, midrange, and control, and does a good job blocking or attacking. It’s not exciting, but it doesn’t need to be to do a good job. 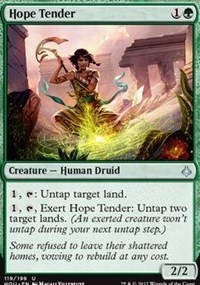 A 2-drop that ramps you every other turn is pretty good, and it can even fix your colors by giving you double color off just one source. I’d hope to be drafting ramp to maximize this, but it’s solid in any kind of green deck.

In a deck without Deserts, this is a bad expensive ramp spell. In a deck where you have the promise of getting Zombies, it becomes quite strong, and worth doing some work for. I’d want 5+ Deserts before playing this, and ideally a high curve to use the mana, at which point this is a good 5-mana play. 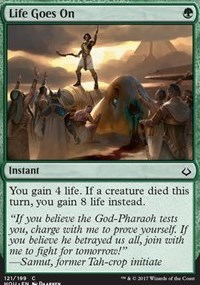 Life does not go on—not on my watch. Even gaining 8 isn’t enough to tempt me, as pure life gain does not accomplish much unless your opponent is on the all-burn plan. Maybe you’ll sideboard this in once during the format, but I’m not optimistic. 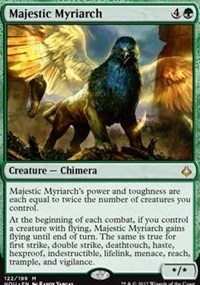 This is huge and will have random sweet abilities. That is definitely worth 5 mana, making this a majestic beast indeed. Make sure you have a creature-heavy deck and you should be in good shape. I wouldn’t play random, bad creatures with abilities for this, though it does make me more inclined to prioritize keywords in Draft. 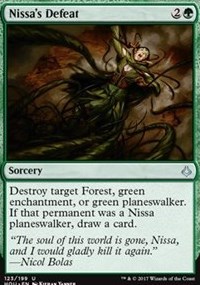 Unlike the rest of this cycle, I’m not really looking to pick this up. Killing lands or enchantments is marginal, though I guess I would actually board this in if I was looking to remove Nissa’s feet. 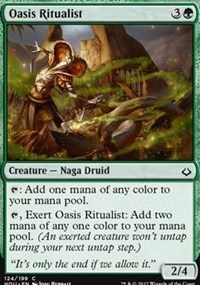 I’m really hoping green ramp is a thing in HOU. Oasis Ritualist takes you to 7 nicely, and supports a plan of playing giant monsters and other sweet cards. It’s got a respectable body, making it relevant even when you don’t need the mana. I like this card in most green decks, even if it won’t fit into a low-curve beatdown deck. 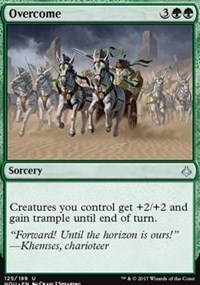 The strategy with this is pretty simple: Overrun the board with creatures, then cast this and send a stampede the opponent’s way. As long as you have 3+ creatures in play, this deals a ton of damage, and if you’ve successfully gone wide this will finish almost every game. Trample is huge here, and makes this a threat even on smaller boards if you’ve got sizable creatures. 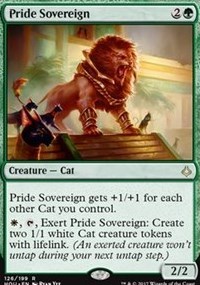 This makes two 1/1 lifelink tokens every other turn, and grows while doing so. You can even go off with untap effects, though that’s not necessary in the slightest. Pride Sovereign is one of the best cards in the set as it’s cheap, brings you back even when behind, and can provide a fast advantage if left unchecked for even a turn. 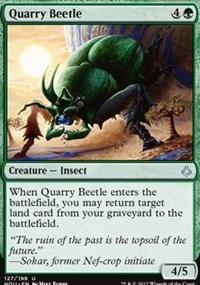 The natural combo here is with Deserts, which often sacrifice themselves or cycle for value. Quarry Beetle is also sizable, making this a solid deal that’ll make the deck more often than not. 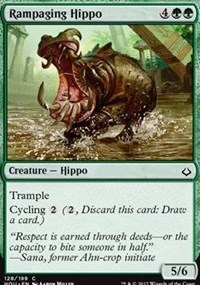 Hopefully the format is a little slower than triple-AKH, because this might actually live up to what Greater Sandwurm seemed to promise. A cycling finisher is something ramp decks like to see, and Rampaging Hippo does a good job at filling that role.

If you can pick up some sweet Deserts, this can dig up a lot of value for you. You aren’t even paying much for the ability, and I’d play this with as little as 2 cycling lands and hope to spike. It gets pretty gross with cards like Grasping Dunes, and is a potent build-around if you draft it early enough. 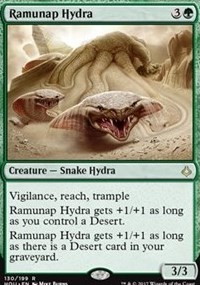 This loses about half a grade if you don’t have any Deserts, but in a deck with 4 or more it becomes quite the beast. A 5/5 vigilance, reach, trample is absurd, even if you have to wait a few turns until it becomes its final form. 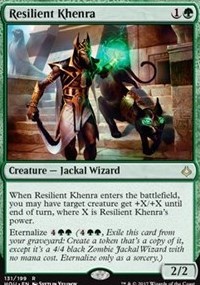 A bear that forces through some damage is pretty sweet, and this coming back as a 4/4 that gives +4/+4 is awesome. It’s good early, good late, and offers a resilient threat that fits into any style of deck. 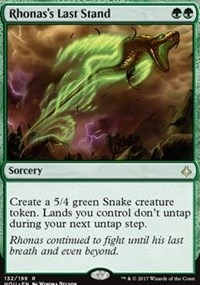 On turn 2, this card is going to feel like complete B.S. Even later, it’s a solid play, though the drawback becomes more real. This is a reason to go green, and offers a ton of stats at a very low cost. 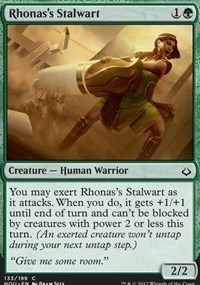 While not quite Gust Walker, Rhonas’s Stalwart still attacks for a substantial amount of damage early, and has a little evasion late. Stalwart is a beater, and will make the cut in any beatdown or midrange deck. 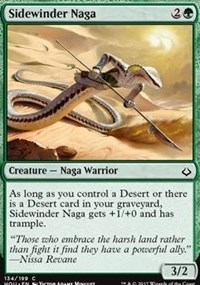 In a deck without Deserts, this is a curve-filler and nothing more. In a deck with Deserts, it represents a lot of damage, though it still dies easily. The dream of playing this as a 4/2 and backing it up with removal and tricks is a real one, and this could make a green beatdown deck tick. 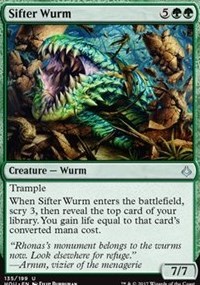 Sifter Wurm is exactly the kind of card you can build a control deck around, as it’s a huge threat that comes with a ton of life to catch you back up (plus a little card selection). I’m hoping this is worth doing, as the payoff here looks real. 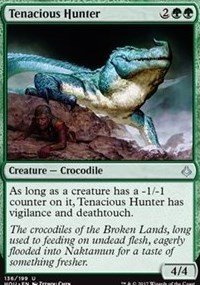 There’s still nothing wrong with a 4-mana 4/4, and it picks up some solid abilities as long as anything is wounded. Note that it doesn’t care where the -1/-1 counter is, even if it’s on your side of the board. 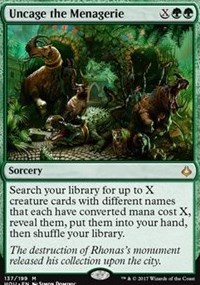 While this is a bizarre card, I think you can cast it with X=3 and be happy. If you get three 3-drops for 5 mana, then untap and play 2 of them—that seems good enough. Casting it with X=2 is not quite enough of a reward, and I doubt you will have 4 different 4-drops to go get (though if you do, that’s not bad either). Most decks won’t be able to run this, but when it does fit into your deck, it is powerful.

It’s possible that green wants to be ramp enough that Stalwart doesn’t belong in the top 3, and instead Bitterbow Sharpshooters or Oasis Ritualist sneaks in, but I’m happy enough starting here and adjusting if necessary. Green got a solid removal spell and decent low and high drop creatures, which is not a bad place to be.