Spoiler season is over. Prereleases are over. It’s time to play Standard!

Hour of Devastation is upon us and I’m excited to see how the new release will shake up Standard. The banning of Aetherworks Marvel opens up a lot of new space for other cards to shine, and with a new set added to the mix the metagame is up in the air.

Today, I’d like to talk about what I see as the best Standard card in the set:

Let’s make a card with the same name as the set! That won’t be confusing…

“Hour of Devastation is awesome!” Um, did you mean the set or the card? Nobody knows. 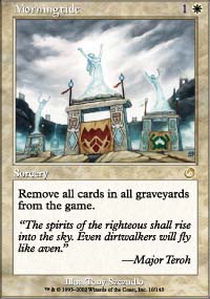 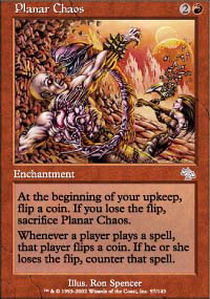 Cards so awesome they had to name future sets after them.

I suppose that if you have to name a set after a card, at least Hour of Devastation sets the tone. Bolas is coming and he’s going to burn it all down (well, except for himself, that is).

The card is crazy good. It’s a 5-mana board sweeper that clears out most creatures and planeswalkers for 5 mana. We have seen functionally similar cards to Hour of Devastation in cards such as Planar Cleansing or Perilous Vault—both of which were strong Standard control cards in their day. But Hour is unique. It’s red, and significantly cheaper at 5 mana than previous similar cards.

The obvious home for Hour of Devastation is likely to be an Izzet Control deck.

U/R Control is nothing new in Standard. The deck was already quite popular in the Marvel metagame and looks to improve with some solid printings from Hour of Devastation. It’s funny that Izzet Control feels a lot like a traditional U/W Control deck and the addition of Hour of Devastation as a wrath effect really brings that comparison home.

Obviously, U/R Control doesn’t have creatures or planeswalkers that can get caught in the wake of Hour of Devastation. In fact, the only creatures in the main deck—Wandering Fumarole and Torrential Gearhulk—both survive the fire!

6 toughness to survive the power hour.

U/R Control has always struggled to beat a resolved Gideon, but now the deck has a solid answer to it. It’s also cute that since Hour of Devastation takes away indestructible, not even Archangel Avacyn can stop the dragonfire.

I’d like to highlight a few other cards that I think will make a splash in the deck alongside Hour of Devastation.

The new and improved Izzet Charm.

Abrade is an insanely useful Standard card. Remember that an entire block of Standard is explicitly artifact themed. 3 damage to a creature at instant speed for 2 mana is already a good deal, but when you tack Shatter on, you’re looking at a big time card. There are a lot of great targets floating around Standard: Gearhulks, Heart of Kiran, Oketra’s Monument, Dynavolt Tower, etc.

The ability to answer Oketra’s Monument and Heart of Kiran on curve seems really important to me, and the combination of Abrade and Hour of Devastation could spell bad news for Mardu Vehicles. 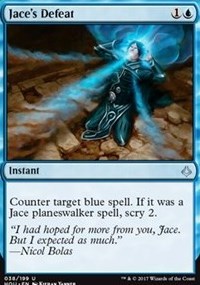 “Just beat it, beat it..
No one wants to be defeated.”

Sorry Jace… you’ve been defeated. Gainsay has traditionally been a good Standard card for control mirrors and this version is no different. Blue is good and so blue hate cards are also good.

Last but not least:

Champion of Wits could be a solid control mirror match card. A cheap creature that lets you filter draws is pretty sweet, and eternalize is a mirror-breaking effect from the graveyard since it is uncounterable and draws lots of cards. I expect that control mirrors will be a big part of the format and this is one card I’ve been impressed with so far. I’m not sure if it is the best possible option, but I like that it is good as a turn-3 play and as a late-game card. It does the kinds of things that are good in a control mirror at every juncture.

I’m a fan of control decks, and this sort of strategy is one of the major archetypes on my radar for the PT. Hour of Devastation really delivers!

Wait, did he mean the card or the set…?

Answer: They both look great!

I’m seriously looking forward to burning and/or countering everything. Time to dust off those Torrential Gearhulks.