Last weekend I attended the Vintage Power 9 event at SCG-CON. I managed to crack into the Top 8 playing a Mishra’s Workshop deck, despite the fact that I haven’t had the opportunity to play much Vintage over the past few years.

The format is a delight and the games were as fun and dynamic as I remember them. It was a blast to reconnect with players I used to hang with back in the day, as well as meet some of the new stars of the format.

I’ve always said that Vintage players have the best time in Magic. After Day 1 of the event, a ton of Vintage players all decided to go get BBQ together, have some drinks, and watch Lebron get steamrolled. At least 20 players showed up. The Vintage community is an absolute treasure. It was probably the most fun I’ve had at a Magic tournament in three years.

Yet, for all of the fun I had at the event there was one distinct element of my experience that caught me off-guard and made me extremely uncomfortable—the value of the cards in my deck box. I haven’t played a paper Vintage tournament in a couple of years, and the value of the cards has increased astronomically since then. In particular, speculation on Reserve List cards has led to crazy surges in price. Moxes are over $1,000 for played Unlimited editions. The Tabernacle at Pendrell Vale is more than $2000. Even something as innocuous as Revised Underground Sea is pushing $700 USD. These cards are expensive investments.

Once I got to Virginia and was playing in the event I felt like kind of an idiot for actually walking around with that much value worth of collectibles in a small box. It could get lost, it could get stolen, I could get robbed—spending two days walking around with that much money worth of cards felt like really poor judgment on my part. It’s one of those situations where it’s fine 99.9% of the time, but that 0.1% would be absolutely devastating.

It’s not even a matter of “just don’t be a klutz.” I had a friend get his deck box with his Legacy deck swiped off his table while he was getting his score pad out of his backpack before a round. I’m all for constant vigilance, but it only takes one second for something bad to happen. There are simply circumstances that are beyond your control.

I don’t know. Maybe I’m in the minority here, but I’m getting to the point where I just don’t feel good about having to travel with that much money worth of cards just to play a game I enjoy.

One of the best answers is simply to protect yourself. If you are an Eternal fan and plan on traveling and playing with expensive Reserve List cards, it makes a lot of sense to look into getting your collection properly insured.

I don’t know the specifics of insuring a collection (I assume there are different policies and variations), but EFro posted on my social media that Magic cards are covered even at tournaments under some homeowners’ insurance policies. It’s important to double check and make sure that your collection is properly photographed and documented for verification. It’s something that I’m going to look into before I decide whether or not I’ll be playing paper Vintage events again.

Look into it if you play Eternal.

Back in the day, the SCG Power 9 Series was always run with a 10 proxy limit, but this particular tournament did not allow proxies. For what it’s worth, while I think proxies are great for Eternal players, they do provide new challenges for TOs that were not relevant back in the day. In particular, they are awkward for video coverage, which didn’t exist back then.

Proxies are a murky issue and WOTC’s tournament policy does not support them. It makes sense that they would want players to use their product in the events and proxies are a slippery slope.

For a format like Vintage, there is very little difference between being sanctioned vs. unsanctioned. It’s not like there are Vintage Grand Prix, Opens, or RPTQ that are qualifying people for Pro Tours or Invitationals. For the most part, paper Vintage tends to be events that people play for their pure love of the game and to hang out with other fans of the format.

I’d love to see more proxy events. The benefits are twofold. First, it makes the format accessible to more players. With Moxes, Workshops, and Bazaars all over $1,000.00 there are basically no budget options. Are you rich? No? Sorry, you can’t play. That sucks, and I can’t get behind rules that require people to spend tens of thousands of dollars to participate.

Secondly, it’s gotten to the point (as I noted earlier) that the cards are so expensive that even if you have them, it feels uncomfortable to walk around with them.

Personally, I feel like Reserve List speculation has been bad for the average player. Vintage and Legacy cards are unrealistically expensive for 99.9% of the people who play Magic to buy now. Die-hard Eternal fans will pay, but you’ve got to be seriously committed to start from scratch now!

I didn’t buy my Eternal cards as a get rich quick scheme to exploit a broken Reserve List situation. I bought most of them a decade ago because I loved the cards and because I wanted to play with them. Yeah, they are worth a ton of money now, but they are becoming increasingly worthless to me because I feel like I can’t actually play with them, which was the intention behind owning them. Not to mention, every time I shuffle them I’m losing value on condition!

I’d love to see a rule that offsets the obstacles the Reserve List imposes on the average player where Reserve List cards, specifically, are allowed to be proxies so that:

I’d love to see Wizards come out with a product that is essentially a booster pack full of attractive, official proxy cards. It would be a nice way to get around the Reserve List without breaking the promise to collectors, while allowing players to enjoy the game.

The idea would be a booster pack that essentially comes with two blank cards of each color, artifacts, and lands. I imagine that these proxy cards would basically look like a Magic card with no text or image and have a Magic card back. Players could write in the name, type, casting cost, power/toughness, and oracle text themselves and draw in their own image, or get their favorite illustrator to do a drawing for them at a Grand Prix. How cool would that be?

A friend and I were spitballing that idea as a way to adapt Eternal tournament Magic for a world where the cards are just too expensive to play with. I’m sure that there are reasons this wouldn’t work, but honestly I’d love to have something like this in place to help foster growth in Eternal.

And before somebody chimes in about how proxies would tank the value of Reserve List cards, consider that Alpha “Web” is like $300.00. 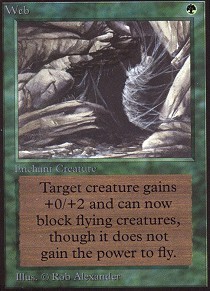 The value of these Reserve List cards are much more closely linked to their value as collectible/rare objects than their Constructed playability.

It would be sweet if more people could play these great formats without being priced out, or in my case, weary of taking their cards to a tournament and risk something bad happening to them. I obviously have a perspective that is strongly slanted towards “I just want to play the game I love and all the cost detracts from that,” but I get that there is an investing side to it all as well and I respect that.

No matter your stance on proxies, Reserve List, etc., I strongly recommend you check your insurance policy and make sure that you are protected in case the unthinkable happens. It’s a complicated topic, and I’d love to hear your thoughts in the comments. There are a lot of sides to this story, but one thing is very clear to me: The absurd cost of Eternal Reserve List cards is changing the game in a way that is not good for people who actually want to play the game.