2 mana to kill anything is quite a bit better than any common or uncommon removal, and by the time you use this you won’t be giving up much by letting the opponent get a free land. Even though you want to use this later in the game (on bigger things), the fact that it costs 2 is a big deal. You can leave up mana to use this as a trick, and cast this plus a spell on the same turn. I’d try and avoid firing this off before turn 5 or so, as earlier does make the mana ramp relevant, but if you have to do that to survive, by all means do so. 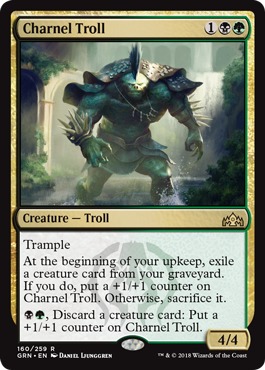 There is a real risk that this runs out of food, and it does weaken your other undergrowth cards, but you do get quite the beefy body in exchange. Think of this as a 6-drop that lets you double-spell on turn 6, as you are rarely running it out early. Even under that constraint, it’s still a great deal. This demands a fast answer, so the drawback isn’t likely to be around for that many turns, and it is a lot of stats at very low cost.

There’s also a CharnelFireTroll.com joke here, but this has been a long week. Assume it was great. 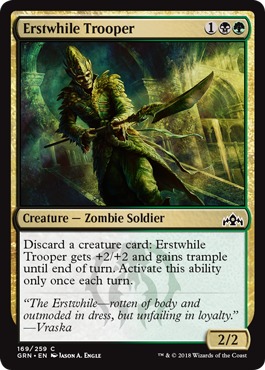 Erstwhile Trooper is going to play well in most Golgari decks. You need a high creature count (16+) to make it good, and once you have that it’s quite the brick wall. Imagine dropping this against a Boros deck on 3. If they don’t have a trick, they will rarely be able to attack into it, and even some of the tricks lead to a 2-for-2 trade. It also fuels undergrowth as needed, and even gains trample, so it can be a good way to start closing out games. 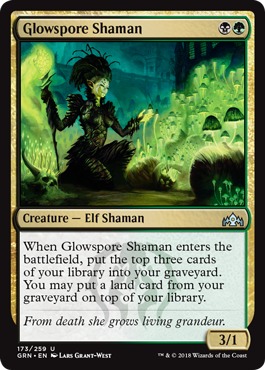 There’s a lot going on with this 2-drop, and I suspect that it will be one of the better (and few) undergrowth enablers. First of all, it mills 3 and is a 3/1, so it can get 1-2 creatures into your bin fairly soon, which is perfect when you’re trying to aim for a 4/4 Rhizome Lurcher on turn 4. It also can help you hit your third land drop, albeit at the cost of a draw step. That’s a good little package, and Glowspore Shaman is going to be solid in any Golgari deck. Even without a big undergrowth theme, a 3/1 for 2 that gives you mana screw insurance is a fine pickup. 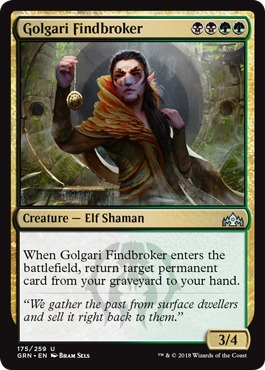 I’m pretty high on Findbroker. Golgari is already interested in self-mill, between surveil cards and things like Glowspore Shaman, making this ability much more than just draw a card. It also has a good stats-to-cost ratio, making it both card advantage and tempo advantage. I’m all over this, and even the difficult mana cost doesn’t give me pause. 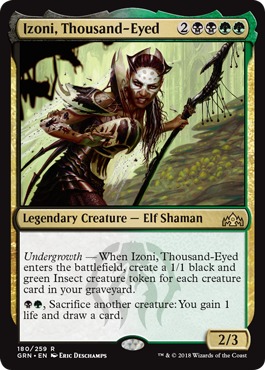 It may take a little work to get Izoni up to a 4.5, but even in a deck with little support she is a 4.0. Making just two bugs (and I have the perfect token for you) is enough, as that’s three bodies, good total stats, and a powerful sacrifice ability. Once you are getting 3+ bugs, Izoni will take over the game, and that shouldn’t be too hard to pull off by turn 6. Having a bunch of chump blockers that you can crack for a card and a life draws out the game more, and plays nicely into Golgari’s grindy strategy. I’ve got my eye on this, and think it could be one of the best cards in the set. 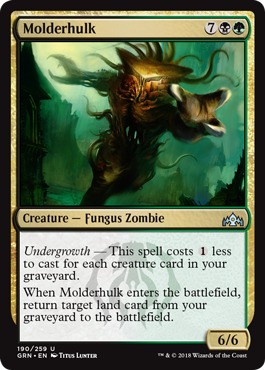 This, on the other hand, is not the kind of payoff I’m looking for. It’s rarely cheaper or faster than a Siege Wurm, and the enter the battlefield ability is basically irrelevant. By the time you have enough creatures in your bin to cast this, you probably don’t need a land, and it isn’t clear that you’ll even have one to target. In a really dedicated undergrowth deck, maybe this is a passable top-end card, but I’m skeptical of how often you’d cast this for 5 mana on turn 5 or 6, which is where I’d want it to be before I felt I was getting an advantage. 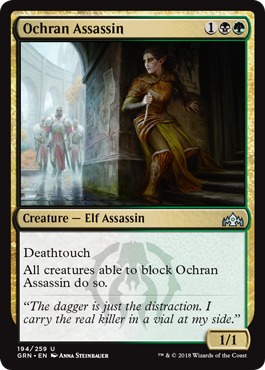 Golgari isn’t normally in the market for pump spells, but this certainly changes the equation. If you give this +3/+3, it can potentially take out four creatures, and even without the dream setup, taking out two or three is realistic. By itself, it also acts as targeted removal, with the only thing it can’t kill being flyers that already got to attack (it can block ground creatures or kill any untapped flyer). It also makes it so the rest of your squad gets through, and all that added together is a lot of action for a 3 mana card. 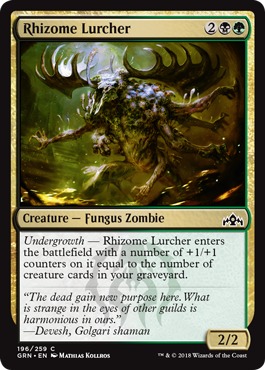 As one of the common payoffs for undergrowth, Rhizome Lurcher is solid. You just need two creatures to have died for this to be above rate, and any more than that puts you well ahead of the game. That seems doable, even if undergrowth isn’t fantastically well-supported, and Rhizome Lurcher is a bright spot (of mold) for Golgari decks. 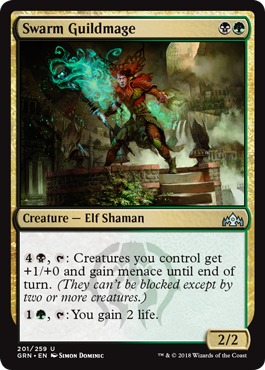 This is the Guildmage where the tap symbol hurts the most, as you’re giving up a 3 power menace creature when you use the ability. Still, this works when you’re behind or ahead, and is great on stalled boards, making it a good deal for just 2 mana. 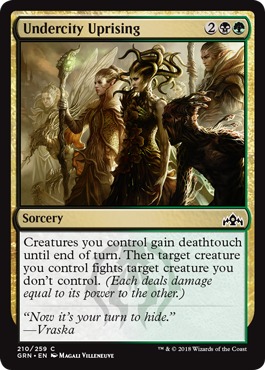 If you have a ton of fodder (Burglar Rats and Generous Strays) this goes up in value, as it’s essentially “sacrifice a creature to kill target creature”. It can also open the door to attacks by giving the team deathtouch, and remember that deathtouch plus trample is a mondo combo. 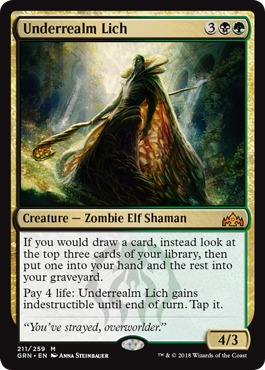 Underrealm Lich is very hard to kill and gives you consistent draw-fixing as long as it lives. It fuels undergrowth nicely, and acts as a good attacker or good defender as long as your life total isn’t too low. The combination of card selection and resiliency makes this a premium card, and one I wouldn’t pass up.

Vraska is quite good, as she can kill small to medium things and lets you cash in your excess permanents for value. She comes in with high loyalty if you use the +2 ability, and all that’s really lacking is her ability to defend herself against larger threats. That’s all that’s keeping her from being a bomb, as she’s not a great play into a 4-cost flyer or a Siege Wurm if you don’t have a bunch of other ways to defend her. Her ultimate is also the same Vraska ultimate we’ve seen three times, which is fine for game play, but it would be sweet to hear a new story. 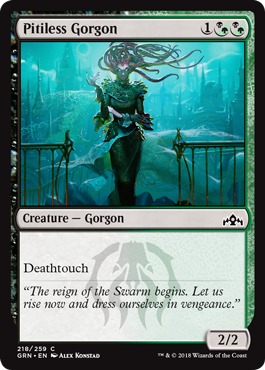 Pitiless Gorgon is a good defender and very easy to cast in Golgari, while being a solid card in either Selesnya or Dimir. It can even attack and prompt a trade eventually, while not worrying about any combat trick save Sure Strike. This fits Golgari’s themes well, and is a solid pick as a result.

This is a brutal split card. It’s a 2-for-1 later in the game by casting double Raise Dead, something Golgari can use easily, and if needed it’s a really powerful sweeper. Giving one of your creatures permanent +2/+2 makes it quite likely to survive the -4/-4, and that’s a big enough minus that almost everything else should die. That’s a powerful set of cards to be combined, even if both lend themselves to late game play.

A cheap combat trick plus a removal spell is the same recipe as Integrity // Intervention, and both will play very well. This wins a combat for cheap, and can really wreck some double or triple blocks, while also being an unconditional removal spell.

This encapsulates Golgari’s game plan perfectly, and is powerful enough to be worth working for (while also not taking a ton of effort to be solid). I still feel like Golgari could have used a little more support, but it’s not Lurcher’s fault.