Team events are the best that competitive Magic has to offer. They give you a chance to play with your friends (or with a mercenary squad of the best players you can assemble), they lead to deep and interesting matches, and they are a prime opportunity for unbiased rankings. I put out a call on Twitter for teams attending the event, and I’ll be ranking the teams that confirmed they were coming. I did get a lot of submissions, so I’ll be sticking to the teams that I judge to be the top contenders, based on my knowledge of the players. If you don’t see a team on here, it’s probably because I didn’t know enough about the players to be confident in my rankings of them. Treat that as incentive to prove me wrong, and crush the teams that I think are the favorites.

The best deck in the format. 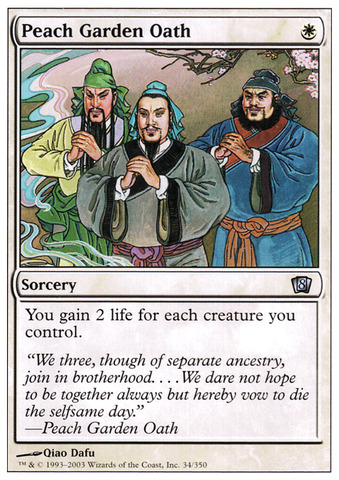 In what can’t be a huge surprise, I’ve got the Peach Garden Oath as my number one team. This team features two Hall-of-Famers (somehow, Owen is one of them—I’m still not really used to that), and a Platinum Pro with a long list of accomplishments, as well as being incredibly close friends. That’s a blueprint for team success, though there are some new factors at play here: Infect is no longer good, and that’s Owen’s bread and butter, but it is Constructed, and I actually like this team better for Constructed than Limited (I’ve watched Owen’s stream). Still, I wouldn’t bet against PGO.

Again, despite recent streams as counterpoints, this team is more formidable than you would expect. Sam and Matt Nass recently took down a team SCG Open, and both Sam and Jacob have impressive accomplishments in Modern (Grand Prix wins, a second at Pro Tour Born of the Gods, and more). Matt also has played Modern. I expect this team to have good decks, good preparation, and very good team synergy, making them my choice for 2nd going in.

Two of my former teammates picked up Andrew Cuneo, and ended up with one of the best teams in the tournament. Both Eric and Ben lose a bit in the transition from Limited to Constructed, and Cuneo is another victim of Infect losing ground, but this is still an incredible squad. I don’t know the level of preparation they have put in, but given the talent here, I have them firmly in tier 1. Eric has among the best team results of anyone, even with teammates such as myself, so I have no doubt about his ability to form and captain a team that has a huge edge against the field.

A great deck, even if everyone expects it.

This is another team that benefits greatly from the format being Constructed. Sigrist may be a Limited specialist, but Hayne and Rubin have much more success with 60-card decks. Three Platinum Pros (including multiple PT Champions and a PT 2nd place, even if the finals wasn’t close) add together to make a very imposing team. This team has also played together before, and I do value consistency and team synergy greatly.

Combining what I assume are the 1st and 2nd place contenders for the Latin American Worlds slot with the undisputed Israeli champion, this team may not be used to doing that much work to qualify. Still, it’s got one of the five best players of all time alongside one of the five luckiest players of all time, with Thiago along for the ride. As long as Thiago can pry Shahar and Paulo off League of Legends long enough to put together three good decks, I have no doubt of this team’s play skill.

A fine deck, and one that will see play.

I had to put Oliver in the category with his favorite deck, even if that might be overselling this team a little. Oliver missing lethal in the Vintage Super League costs the team precious ranking slots, and Merfolk being plausible enough for Ondrej to play it doesn’t quite make up for that. Former Platinum Pro Jason Chung rounds out the squad, though I don’t know how closely he’s worked with Oliver and Ondrej before. They basically speak another language, as someone who has teamed with them and wasn’t born in the 2000s. I do rank this team’s technical play very highly, hence making it into the coveted Bant bracket.

This deck used to be great, but Death’s Shadow Aggro has overtaken it.

There’s an argument that they are literally the three best players of all time (with Finkel and Kai being a lock for 1 and 2, in that order). Nassif also has a very good Constructed record historically, making this one of the teams with the highest potential. I don’t actually know if Kai plays Magic anymore, or just spends his time critiquing Magic streams, so if this team has a weakness, that is it.

This is the team that loses the most from the Limited to Constructed switch. I’d have them near the top if the format were different, but I have some reservations about their Constructed prowess. Rietzl is one of the best to ever cast Arcbound Ravager, and this team does have what might be the highest synergy rating possible, so I still like their chances. I also assume they will make Dave play a real deck, something he seems to resist at almost every Pro Tour.

People love this deck more than they should.

It was neck-and-neck between this team and the one below it, but I had to give this team the nod. Both Paul Cheon and Seth Manfield are World Champions, and both Brad Nelson and Tom Martell have impressive titles (Player of the Year and Pro Tour Champion, respectively). Pat Cox and his 3 Pro Tour Top 8s plus SCG Invitational win (alongside his recent induction into the Florida Magic Hall of Fame) is the tiebreaker over Gold Pro Michael Majors, making the Cheon-TDubs-Martell mashup the 8th seed. I will say that if Martell was planning on carrying this team, his recent back injury makes their chances a small amount worse.

I went over this team’s accomplishments in the entry above but to put a bow on it, this is one of the best teams in the tournament. Brad is historically not the biggest Modern fan, with Standard being more his wheelhouse, but I have no doubt that this team will prepare well and know exactly what is going on.

This deck could be busted or unplayable.

How good the Amulet deck is really does impact how well this team does. Corey has won way more than he should with Cryptic Command in his deck, and both Sam and Justin are Constructed masterminds, even if they usually stray off the beaten path. I like this team’s chances, and especially in a team format where maximizing card positioning is a big edge.

A team composed of two Silver-level Joshes (though I guess Wrapter’s recent MOCS win ruins that) and one of the best decknbuilders in Gerry T is a solid one. The amount of preparation they put in for tournaments is high-variance, to say the least, but if this team is on point they are near the top of the field. Plus, Josh (Utter-Leyton) won his last two tournaments, so momentum is on his side, and Josh (Cho) has a Pro Tour Top 8, something I bet not a single one of his opponents will know.

The current World Champion headlines this team, alongside Pro Tour Oath of the Gatewatch Top 8 competitor Pascal Maynard and noted Esper aficionado Shaheen Soorani. I am suspicious of Shaheen playing Cryptic Commands in this format, but if his teammates can come up with a deck configuration that works, this is a good team. BBD and Pascal have both had solid Modern success, and Pascal has to be one of the most experienced Bant Eldrazi pilots in the field (and made Top 8 with Affinity in the Pro Tour).

Unstoppable with the right draws.

This is another team with good momentum, as Chris is fresh off a Top 8 at Grand Prix Orlando. He does admittedly hate Modern, but having Gold Pro and Legacy Grand Prix Champion Jarvis Yu on his side will help, and being lucky enough to get to hang out with Ben Seck (TBS) all weekend is a sign of good decision-making. I don’t know enough about this team’s prep to have a sense of what decks they like, or if any of them have any particular specialities, which makes me put them in the high-variance category.

I don’t know how good this deck is, but people play it.

Team Cardhoarder is sending a whole gang of teams, including the GP Orlando finalist Noah Walker, and accomplished grinders Joe Losset and Andrew Boswell. I don’t know enough about the other members to realistically rank them, but there are a lot of teams under this banner, so I’m mentioning them for completeness’ sake.

Didn’t see a team I think is great? Think I overrated my friends? Well, you are probably right, but I stand by these rankings anyways.

Let’s see how wrong I am this weekend.