I’ve learned a lot from my time in the coverage booth. I have plenty of experience being a player, and plenty of experience being a passive spectator, but in many ways, commentating is a unique third way to ingest a game of Magic. Watching games from a different viewpoint gives you a whole new perspective on what’s going on, and can help you see things other players do that you don’t, or vice versa.

One thing I find particularly fascinating is the information the players are gathering about their opponents—their hand, deck, strategy, etc. A situation that comes up a lot, and that I find rich and challenging to cover, is when a player seems to be acting on a “read” about what’s in the opponent’s hand. This could be as simple as not blocking an attacking 2/2 with an untapped 3/3 (for fear of Giant Growth), or it could be much more complex.

In spots like this, there’s always a lot to unpack—there’s strategy implications, and the signals that both players are sending, receiving, and acting on. What I’ve found is that different players approach these situations in widely different ways. Even strong players with impressive deduction skills don’t always, in my opinion, approach these situations as well as they could.

Your opponent attacks with that 2/2 creature, and you now suspect that they have Giant Growth. That’s great! You’re thinking deeply about the game, gathering and processing information, and you may have nailed exactly what’s going on with your opponent’s hand. Now what to do with that information is the hard part, and it’s where many players get lost.

In this article, I’ll lay out the way I approach these situations, which I believe is a good one. It will help you avoid walking into traps. Even more importantly, it can prevent you from psyching yourself out of a winning play. This approach can work for anyone, and will scale according to your skill level. That means that you can use it if you just learned Magic yesterday, but that it will continue to serve you if and when your skills become far, far greater than mine.

In a typical game of Magic, you never see your opponent’s hand, but you get clues about it as the game progresses. If your opponent misses an early land drop, you don’t know what’s in their hand, but you strongly suspect it’s full of nonland cards. If they’re playing aggressively, you start to worry they’ll have a surprise card to help them win the race.

At a certain point, you may combine all of these clues and signals into a specific read. “Jane missed a land drop early, but now seems to have played out all of her creatures. She’s been playing aggressively, but had a great opportunity to use Sure Strike last turn and didn’t have it. I think the last card in her hand is Lava Axe!”

You may have been worried about Lava Axe right from when she played her turn-1 Mountain. Then the game progressed a little and you realized that Lava Axe was one of the cards that would make sense for her to have. More hints came, and when she didn’t cast Sure Strike on the key turn, you began to think that she had Lava Axe. A few more turns went by with her checking the life pad a little too zealously, and your read became even stronger.

Throughout all this, I’ve been careful not to use the word “know.” There hasn’t been a point in the game where you know that Jane does or does not have Lava Axe. So at what point do you begin to make strategic decisions based on your read? What if you have a 6/6 creature and she has a 2/2 creature? Should you make a favorable exchange of damage, or take great pains to keep your life total high?

The challenge comes from combining your suspicions with the strategy of the game. It’s easy to see, from a general strategic standpoint, that trading 6 damage for 2 damage is a good thing, even if you’re at 9 and your opponent’s at 18. It’s also easy to predict that an aggressive red deck could contain Lava Axe, and that going to 5 life isn’t ideal. The intersection of those two concepts is what makes the situation interesting.

In order to help with tough decisions, I like to assign a probability to my opponent having the card in question. This number changes as I gather more information.

So when Jane plays turn-1 Mountain, the equation is relatively simple (and also relatively unimportant). “From my experience, 30% of red decks play with one Lava Axe, she’s drawn 7/40 cards, so the probability that she has Lava Axe is around 5%.”

Later in the game, Jane has made plays that specifically point toward her having Lava Axe (plus she’s drawn more cards). The probability that I assign is now far greater. And mind you, I don’t need to be shackled to my original “30% of red decks have it.” I update my prior belief with all of the new information, and if she’s really playing like she has it, then that’s what I’ll often put the most stock in.

My number never gets to 100%, which is part of what makes thinking probabilistically a strange concept. In reality, there’s no randomness in the situation—either Jane has it or she doesn’t—and in a perfect world, you’d be able to figure it out. But from a practical, decision-making standpoint, you never really know for sure until you see Slash from Guns N’ Roses pitching that yellow axe at you. 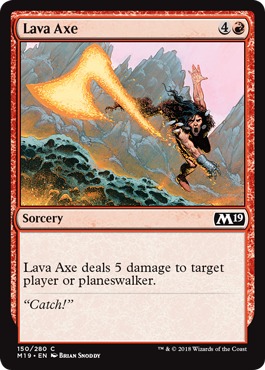 It’s important not to let hubris in—always consider the possibility that you could be wrong. It’s true that the stronger a player you are, the more you’ve played the format, and the more you’ve faced similar situations in the past, the higher your number might get. But for me, in this example, I wouldn’t be anywhere close to 100% sure. After all, maybe Jane is making those plays hoping to draw a Lava Axe. Maybe I misjudged the situation and she’s just holding a land.

Let’s say that I assign a probability of 75% that Jane has Lava Axe in her hand. Should I trade 6 damage for 2 damage when she’s at 18 and I’m at 9? Well, step two is to consider the strategic implications. Can I afford to play around it? Maybe I feel like I’m losing and need to take some risks. What will happen if I wait? Maybe my deck has a strong late game and I feel confident in my ability to win if it drags on. But maybe that’s not the case and I should worry that she’ll draw a flying creature or more burn spells. What happens if I attack? I’m beating the board, but she could draw a haste creature. What if my read is wrong and she’s already holding a haste creature instead of the Axe?

If I’m forced to “answer” this example, I would say that I’d attack once and then re-evaluate next turn. If both players draw blanks, I could easily be willing to follow my read and starting holding back the 6/6 creature until something happens to change my strategy. But this answer is less important than illustrating the general approach of thinking probabilistically.

The card that inspired this article is Settle the Wreckage, particularly since I’ve covered so many games of Standard that are centered around it.

So here’s an example:

I have two Glorybringers, but not much else. My opponent has Teferi, Hero of Dominaria with 5 loyalty, 4 mana open, and a high life total. I think that he has Settle the Wreckage. What should I do?

To approach this question, let’s first pretend that I have x-ray glasses and know for certain what’s in my opponent’s hand.

If there’s no Settle the Wreckage, then I should make the aggressive play and attack with both Glorybringers at Teferi.

Next let’s define what it means to “think he has Settle,” and assign a probability that he has it. Well, my information is the following: U/W Control usually plays three copies of Settle the Wreckage, my opponent has drawn a healthy number of cards, he decided to commit Teferi to the battlefield in the face of the Glorybringers, and he played his last turn with confident body language. When I’ve faced similar situations in the past, they’ve usually had Settle. I think he has Settle.

But I don’t know it. So long as it hasn’t been taken with Azcanta, or shown with a previous Duress, or dropped on the table by accident, then I’m going to make my decision as though there’s some uncertainty. I could always be wrong. Maybe when I practiced the matchup, my opponent ran really hot and always had what he needed. Maybe I lost the last two rounds, I’m in a pessimistic mindset, and my judgment isn’t completely sound. Maybe my opponent has a good poker face and is trying to sell me on having the Settle.

When you face this situation, you’ll come up with your own number. For the sake of the example, let’s say that I feel 90% sure that there’s a Settle the Wreckage waiting for me.

Based on my experience in the matchup, I find that I lose very close to every game (let’s say 95% of games) where my opponent gets to untap with Teferi with a reasonable life total. In this case, I’m basically going to lose no matter what if my opponent has the Settle. I’m also exceptionally likely to lose if I make the conservative play, even if my opponent doesn’t have it.

I’m making the aggressive attack every time I face this situation, and so should you. You can see from the numbers that the situation is very bad. My best chance of winning is to attack aggressively and hope that my read was incorrect—that my opponent does not, in fact, have Settle the Wreckage.

It’s a difficult concept, in part because my conclusion in this example is that I should not trust myself. You might think of it as a lose/lose situation: Either you’re right about the Settle and you lose the game, or your attack succeeds and you feel embarrassed that your read was off. But this is why an important part of thinking probabilistically is taking pride out of the equation.

Whatever the case may be, if I determine that my most realistic route to victory is playing out all my creatures, I’m still willing to do it, even in the face of a strong read. I don’t feel as though my worth as a Magic player is tied to whether or not I correctly identified the card in my opponent’s hand. On the contrary, I’ll be happy so long as I’m making sound decisions. The goal is simply to give yourself the best chance of winning in the face of whatever uncertainty and strategic context you’re facing.